Some time ago I made the plan to hitch all the Renown items hidden in menace zones in one go (and a Tomb-Lion on top) on one of my accounts, and thereby test out what happens when you hit 8 on all four major menaces at (almost) the same time. I finally carried out the plan and am now duly putting in my report here ;)

The plan I laid out was thus: 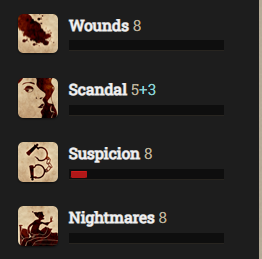 And this is what happened:

So there’s possibly a hardwired Menace Pecking Order meaning that when in doubt you’re always sent to the Boatman first, but we’d need more data to confirm this.

Has anyone ever tried something similar(ly crazy)?

Wow. Nice. I expected there to be a pecking order but I didn’t know what it was. I thought it might be the sidebar order, but looks like suspicion and nightmares are swapped.

Has anyone ever tried something similar(ly crazy)?

Yup, many years ago and I remember there you visited menace zones in an order.

But I love that people still do it! :D Way to go!

Wounds first definitely makes sense (even in the neath, dying has very definite body-and-soul separating effects), and I suppose the cops can’t arrest you until you’re actually in London and staying relatively still for a few minutes…

Yup, it seems so. I found the threads I was talking about: Quad Fail. And this one which is almost a decade old: Menace Priorities.

Yup, it seems so. I found the threads I was talking about: Quad Fail . And this one which is almost a decade old: Menace Priorities .

Oh wow, thanks for finding these! (Have we appropriately celebrated finally having a workable search function on our forums yet?)

Looking through these old threads, it appears Death usually came first - but not always - and the others could come up in any possible order!

Have we appropriately celebrated finally having a workable search function on our forums yet?

Well, should be, but I remembered that NiteBrite left a comment to a thread that lead to the older one. This was somewhere when I started looking into the forum for older and weird threads so it didn’t took that much to find it while checking NB’s comments during that period.

Speaking of old forum threads I just remembered that this one exists: Worst luck and/or misclicks you've had?. Aaaah, what times when forums were active!