Good news, I don’t believe anything was lost!

Same! I’ve had multiple Masters Bloods’, but no milk. I even forgot I was missing any unique thing until De Gustibus came up and learned there was something I was missing.

Funny you should say that, the other day I actually got some milk sometime after De Gustibus (during which I was able to donate milk).

…I have no idea what to expect from Hellworm Cheese. It might be the most delicious cheese in the Neath, putting the poor bovine-shoggoth hybrids employed by Bonsworth’s to shame. It might be the nightmarish cousin of Casu martzu, a strange form of Hellworm reproduction teaming with jumpy grubs. It might just get up, roll away, and become a companion. I fear none of these options, only waiting a year just to come back to a perfectly ordinary wheel of cheese that can be unceremoniously eaten for recovering a pittance in Wounds. 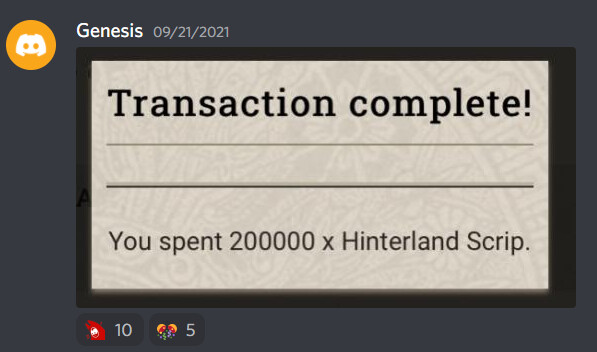 Is that a Discord screenshot? I’m not on that platform, so I miss announcements made there unless someone is kind enough to repeat them to me elsewhere.

Pick a name! And, if you wish, a profile link (I found a game profile for someone named “Genesis” but I doubt it’s you).

Congratulations again, Alan! Your name is surely entered into a book in Hell, with many annotations inscribed next to it.

I first shared with IRC, then stealthily updated the wiki - not surprised to see that you were again first to notice :3

From what I can tell, it literally has no effects, and I could buy further tins if I so desired, which I really don’t. you’ll never convince me to buy 7. never.

2 Heptagoats as Idly is going for that too.
I remember Alexis mentioned there’s an interaction between the fancy goat and the Cider. Because someone already bought two Ciders, you can go for multi goats. Or multi Ciders. Or both. Or another basic worm.

My account is mikey_thinkin but it’s Genesis on all the social media. The worm is nameless for now… 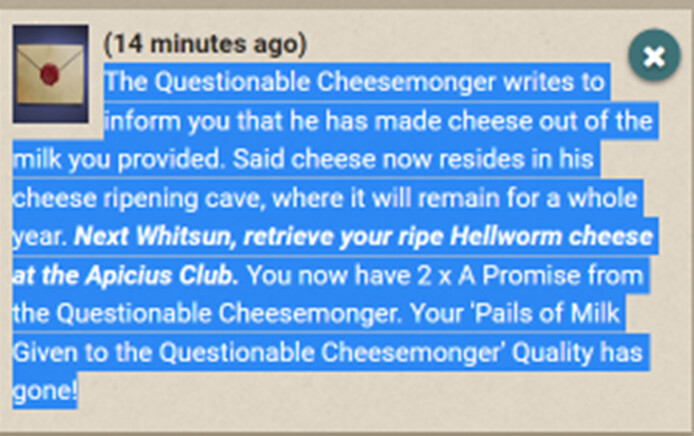 Outstanding worms have been added to the membership scrolls with their owners, although I still have some name-pestering to do.

Cheesebearers-in-Expectancy, but it will take some time to round up the data. I hope some of you made my life easier by echoing things!

I have never been on Reddit, so no, not me.

I got my Hellworm, Wiggly Woo, on the 11/11/21. I can’t find any related echoes (I spent the next few weeks on catching up with the pile of ES I had lying around so I didn’t do any worm-milking for a while), and the only date on the screenshot is the file date, but I do have the echo for when I saddled and bridled it on the 11/6/22. I’m also waiting for one wheel of cheese.

I should probably self-report cheese.

I guess if we’re reporting our Cheese-waiting-ness, I am as well.

Today (July 1st, 2022) is a momentous day for Feldon Smithe. He has come into possession of a newborn Hellworm, which he has named Clyde. He is looking forward to the day that he and this marvelous creature can roam the lands, and on that day Feldon shall call out “Right turn, Clyde.”

I acquired my very own hellworm sometime on or before the 31st of March when I found my first record of milking it. Fallen London

I have just recently acquired a saddle for my fine worm, and should add that I am eagerly awaiting two fine wheels of cheese next Whitsun. The saddling: Fallen London

@maleclypse Has your worm picked a name for itself yet?