November ES: The Crocodile Who Would Be King

[color=#0066ff]Exceptional Story for November: The Crocodile Who Would Be King[/color] 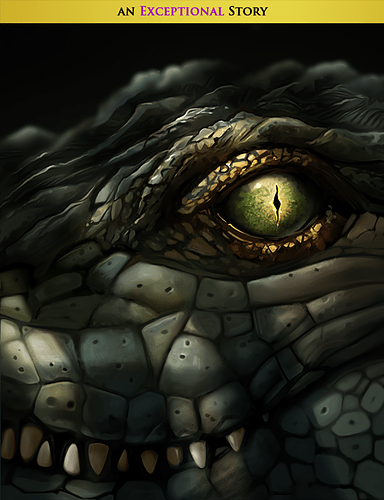 You no longer need to log in to claim your Exceptional Stories! If you have an active subscription when one is available, you’ll receive it automatically.[/color][/font][/color]

Still a pity that EFs don’t get to see the ES-teaserstory.

This was a really fun little adventure that would’ve been far less fun if the sewers took actions. It’s still quite a hefty little action sink, but worth it for all the callbacks to other ESes-especially a certain immaterial affair. And as seems to be the trend in Chandler Groover stories, the character I started out trying to brutally destroy ended up being the character I ultimately won the eternal friendship of. Somehow.

I get the impression you were meant to feel bad for the poor crocodilian on account of how a different character existed mostly to be its mouthpiece. And while it had no chance to stay my hand because I didn’t murder and leash the Vake just to overlook ANY challenge to the position of being London’s apex predator, I have to say the fact that it turned out to be a BLOODY FINGERKING raises big questions about why anyone would feel bad for it.

So I sabotaged the croc, which pulped it in the real world, and a very odd thing happened in the other one which apparently the Fingerkings didn’t expect to happen? At that point I’d already technically mulched the thing so I didn’t see the harm in giving it a standing ovation, which was apparently enough for the former croc to forgive all pass transgressions. Especially when I pointed it in the direction of an old friend from the 2nd City.

So uh. In an odd way, everyone got what they wanted! The croc was accepted by his kind, I got to hunt and mulch a gigantic reptile and Mr. Mirrors apparently enjoyed the empty receptacle he ended up with.

That was fun! FL draws a lot from old-school interactive fiction, but I think this story felt the most like a traditional text adventure. Exploring the maze, solving puzzles, finding different characters to talk to… an interesting experiment that worked really well, I’d say.

Is it wearing a top hat too?

Is it wearing a top hat too?

Oh, no. It does have a rather fancy shroud and confetti.

I thought this was a lovely story, with one minor issue. The part in the Mirror Marches depended on random-drawing cards, which led to a small, but not inconsequential grind. I imagine that someone with worse luck could have that pain stretch to days, rather than the 12 hours I spent waiting for cards.

I had a lot of fun with it. Caroline found herself in one unexpected situation after another. It was pretty fun.

I am really glad that the sewers did not require actions. That was a good choice. It also used a lot of excellent past stories. I hate that having a certain companion did not prove relevant when she appeared in the story. Something cool from that would have been nice as I do rather like the character.

That was lots of fun. I got very invested in the magic trick, which I still don’t quite understand and suspect I’m not supposed to entirely.

But can anyone tell me the reward? I turned in the (spoiler thing) to Mr Inch, and my tablet had a hiccup while I was echoing it, and it was all gone. I have the memory of a tale and a lot more rostygold, but I’m sure there was something else? Not major? There was talk of a meet at Nassos at midnight, which led to me to think there was more conclusion, but maybe the rostygold reward was it?

Normally Exceptional Stories reward an item worth 62.5 echoes, like a Night-Whisper or something. The main material reward I received at the end of this story was 62.5 echoes of Rostygold. So yes, it’s a bit unusual but it seems the Rostygold bounty was the main reward.

[quote=PSGarak]Normally Exceptional Stories reward an item worth 62.5 echoes, like a Night-Whisper or something. The main material reward I received at the end of this story was 62.5 echoes of Rostygold. So yes, it’s a bit unusual but it seems the Rostygold bounty was the main reward.[/quote]I thought so, given the amount. Just a pity I missed seeing what the smaller things were.

I was also worried that I maybe missed some final coda. The mention of the meeting at Nassos Zoologicals implied the future &quottonight&quot. Like hand in, get reward… then on to Nassos to say goodbye, and get your super-special one-off 10% discount on purchases for one scene only, or a free rat, or a scolding from the Impertinent Guinea Pig or something.

If nothing like that happened and it just ended with the reward, then i missed nothing and I am content,

Some opportunities to use my personal qualities in this one, and was pleased to see a unique ending suiting my particular ambitions… Nemesis and The Empty Cup
https://www.fallenlondon.com/profile/J.%20Ward%20Dunn/24732483

Rest of the story seemed to run on rails, though. I don’t think it made much difference what you did during the illusion or in parabola, unless maybe someone tried getting the fingerkings to boo the Yolk in Yearning?

Am I the only one who suspects this whole story came about as an excuse to use the word “tintinnabulation”?

Enjoyed this story, including the little tie-ins with previous Exceptional Stories, Ambitions, and the Discordance.

I have to say it’s a odd feeling to be back in London and still see a full 9 Nightmares in the sidebar. I suppose my character is spending a little time walking the streets raving at nothing and everything.
edited by Aiza Moor on 11/16/2021

There are some ties to deeper lore mysteries in this story, although they didn’t seem to be the main focus. I’d like to pull on those threads a little.

The Crocodile was trying to become a King. That’s something we’ve seen before, just a little bit. The ES Go Tell the King of Cats shows a Parabolan King that was created by making a deal with a Fingerking. And we see two other possibilities for what a Parabolan King might be when the Dome of Scales is under the sway of the Cats and Fingerkings, with the latter also letting the Ophidian Gentleman provide some elaboration. I’m not clear if this relates to kings on the Chessboard

This seems to be more significant than just &quotfingerking gets powerful.&quot They do somehow seem to become entangled with the Parabolan faction that they represent. So… does this make Crocodiles a faction in Parabola like the Cats? Did they used to be a faction back in the Second City, and then stopped because there are no Crocodiles in the Third City?

There’s clearly a lot of connection here with the Second City. And our involvement with the ritual reminds me of the myth of Osiris, who was tricked into a coffin, murdered, dismembered into dozens of pieces, and spread across the countryside, before his body and divine authority were reconstituted. This makes me wonder to what extent we are completing an event or continuing a cycle of events that were first put into motion by the Pharaoh’s daughters.

It’s the best I’ve seen in a while, laugh out loud good. For anyone wondering:

Reprehensible
&quotYou didn’t actually buy that thing, did you?&quot asks a cat sitting outside the shop when you emerge with the lizard. &quotReptiles are always more trouble than they’re worth. I’d recommend dropping it in the sewer. Just flush it right down—&quot
Before the cat can finish, the lizard’s tongue flies out, sticks to some whiskers, and rips them loose. Most lizards are silent, but as the cat begins to yowl, this lizard’s silence is smug.

The echoes of the story of Isis and Osiris were very strong and felt very moving. It is also worth noting the mention of feathers, which ties in with the feathered serpent of Mesoamerica. And the final lines
[spoiler]O my heart of my different forms!
Do not be hostile to me in the presence of the Keeper of the Balance.
Go forth to the happy place whereto we speed.[/spoiler]
are quoted from the Egyptian Book of the Dead, Spell 030.
A random insight: it was actually possible to remember the route through the sewers.

Nice ES. Entertainingly written and the sewers had a very old-school charm. Though I’m not really sure what happened at the end when the crocodile became king, against some resistance in form of a sound booing. I mean, it is a Parabolan Entity of some power, so what now?

And for the record: One ending choice was unlocked with Ambition: Heart’s Desire 230.