Hallowmas 2022: the Feast of Masks 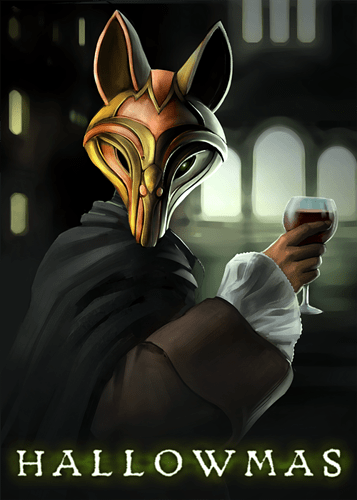 A damp fog fills London’s streets. Londoners of all stripes lurk in its concealment: masked, cloaked, triply hidden. It is the season of Hallowmas, of the commission and purging of sin. Londoners seek out the Attendants – the masked representatives of the Bazaar – to be shriven.

The end of October is upon us, and with it, another Hallowmas comes to Fallen London. Hallowmas is a free revel, open to all Londoners. This year, Hallowmas will run from today, the 24th October, until the 7th of November.

The Feast of Masks

At Hallowmas, it is customary to go masked. Three masks are in vogue this year: the Smiling Demon, the Four-Eyed Moth, and the Infant. Select yours, gain access to a secretive Hallowmas revel, and indulge yourself to raise your Scandal, Wounds or Nightmares.

Hallowmas masks are wearable items that confer powerful attribute bonuses to your character for the duration of the event. Wearing your mask will also allow you to see the opportunity card that leads to one of the Hallowmas masquerades – exclusive parties where confessions are traded and sins forgiven. The Crown mask has fallen out of fashion for this year, while the Demon mask is back in vogue, returning with new art. At the end of Hallowmas, those masks will become souvenir items that are no longer equippable. For Fate, you will be able to purchase a permanent version of the item.

Confessions abound at Hallowmas, if one knows where to stand when the eaves are dropped. Confessions will be released for free during the Festival, and also available to buy for Fate. You will receive a maximum of 14 free Confessions (some in week one, and more in week two).

Confessions can be unlocked on the ‘Streets of London: Hallowmas’ card, and traded with other players to achieve the combination you desire. This year, all types of confessions will be available from the outset of the festival. In order to make a trade with someone else in Fallen London, you will need to add them as an acquaintance, either by visiting their profile page and clicking ‘add contact’ or by typing in their character name during the trade. You can also arrange trades through the forums in the official confession trading thread.

Many Londoners wear masks. Only seven have been called on to do so by the Masters themselves. The Attendants are the representatives of the Bazaar at Hallowmas. Londoners deliver up confessions to them; their own and others. The Smiling Jester. The Glasswhisper. The Knight of Numbers. The Scarlet Physic. The False Student. The Fool’s Apostate. Hammerstrike.

Specific combinations of Confessions can be brought to the Visitors if you have a certain Companion. These Confession combinations can then be used to upgrade that Companion to a new, Hallowmas version.

The Spirit of Hallowmas

A certain festival joie de vivre. A spring in the Hallowmas’ celebrants step. An indication of a confessor’s participation in the Feast of Masks. Throughout the festival, look for a card in the Opportunity Deck called ‘The Fool’s Judgement’. This will allow you to convert Scandal, Wounds or Nightmares into Spirit of Hallowmas.

Accruing enough Spirit will bring a visitation at the end of the festival; as usual, up to 2500 Spirit will bring rewards, and any additional amount will uplift you in the ranks of the Knights of Hallowmas. The nature of your rewards will depend on the Menace you have most frequently converted into Spirit.

The Feast of Masks, when opposites meet at midnight! This is the season of unexpected guests; of guests who carry terrible glimpses of possible futures.

At Hallowmas, you may catch a glimpse of your destiny. Destinies are unique items of equipment that offer a premonition of a possible future. This can only be done at certain times of the year, so take advantage of the chance! Acquire a destiny, or change yours for a new one, on the card ‘Attract a Visitor at Hallowmas’.

We have some new and returning delights in store for you.

A new companion, the Weary Wayfinder, can be encountered at the onset of Hallowmas this year, and upgraded through Confessions. A number of other familiar faces can benefit from the revels; what might your Lamp-cat learn from London’s sins? What, exactly, is the Efficient Commissioner’s business here? In total, eight new Companions are available through Confession this year. Where upgrades require companions from previous seasonal events, those companions are available to purchase now for Fate.

We’ve also brought some fan favourite companions from years past back into the confession rotation this year. Say hello again to the Minacious Union-Rat, Rubbery Campanologist, Rubbery Herald, and Fabulous Accomplice.

And finally, if you’re espoused to the Gentleman Smuggler or Notorious Art Dealer, you may now begin a short story to further advance their careers. These spouse upgrades are permanent, and will remain available after Hallowmas has closed.

This year, Hallowmas will run from today, the 24th October, until the 7th of November. After the festival closes on the 7th, you’ll be able to turn in confessions and claim rewards until the 14th.

We hope you enjoy the revels!

My, that’s quite the cast of characters! After the lamp-cat, it’s going to be some hard decisions.

So, what’s everyone’s Hallowmas costume? I’m dressed as a spooky skeleton. Demon mask, ribcage breastplate, fierce heart in one hand, leviathan-bone knife in the other, another bone knife in my boot, riding my Mary Lloyd-cycle with a Curator skeleton on the back.

I got the Moth mask last year, back then the Infant mask was the new thing.

Which mask should I choose this year?

Bloody hell, and here’s me on Godfall dealing with this wax-wind nonsense.
What to do? Do I just cut and run without finishing this first? What a bother.

I was on Godfall this morning with the same dilemma. I carried on fighting the wax wind, mostly for character reasons - Yara wouldn’t abandon the Naturalist and sail off to go party for a couple of weeks. Ymmv of course.

The lack of Wound-raising equipment is annoying to me. That means more actions need to be spent.

Right now I am assessing which companions to get/upgrade. Certain upgrade options are disabled for me, because I do not have the prerequisite item.

Remember, we have a total of 14 confessions during the two weeks to exchange for stuff.

I am still somewhat of a noob when it comes to understanding which of the advanced skills is more useful/in demand e.g. Player of Chess, Red Science, Shapeling Arts etc.

The lack of Wound-raising equipment is annoying to me. That means more actions need to be spent.

This doesn’t actually matter too much. The amount of Spirit you gain is a formula depending on your base Menace, so it’s roughly proportional to the change points required. It’s actually slightly better to load up with Meance-reducing equipment, but the difference is small.

I am still somewhat of a noob when it comes to understanding which of the advanced skills is more useful/in demand e.g. Player of Chess, Red Science, Shapeling Arts etc.

You know, it varies a lot as new content comes out. Red Science was top-line for a while until the Lab redesign; Monstrous Anatomy was top-shelf but was nerfed recently because it was too powerful. I might say try to get a baseline of +3 to all of them, and then after that it’s probably best to try to maximize one or two of them.

I believe my choices have already been made for me, I don’t have enough Rubbery favours or renown to get the Rubbery Herald or Rubbery Campanologist.

I shall get: Navigator-Elect of the Sea of Spines, Prescient Automatist, Feline Pariah, Reptilian Darling of the Beau Monde, Minacious Union-Rat and Fabulous Accomplice.

Six companions, requiring a total of 14 confessions. And that’s that.

Is there anything new at the various masquerades or can I raise menaces elsewhere with peace of mind?

Haven’t sen anything new. I’m too busy trying to figure out why I need new companions with qualities I already have, and wondering what happens to my railroad board if I upconvert my Efficient Commissioner.

Cool, thanks! And well, I personally go for either a) cool art or b) cool description when it comes to companions. And cats. Always all of the cats.

For what it’s worth, the optimal Spirit grinding strategy is to REDUCE your menace so that you spend fewer actions trying to get into and exit the various parties.

It also saves resources because you need fewer card draws / paying to get in if you don’t have draw the card.

Right now, the Fabulous Accomplice is extremely attractive for Helicon House use (to grind Persuasive up profitably).

Other companions… you can never tell which one is going to be the next star. They tend to pop up in strange places.

Please excuse my confusion and these resulting two questions related to my planned Hallowmass strategy for raising the Spirit of Hallowmass.

I chose the moth mask since the Underclay source of nightmares seems to be basically free and yields a large CP of nightmare per action (5 CP per action). I have only a 10% chance of succeeding at this check so that is pretty low. I have gear that reduces my nightmares by 2. So here is my question:

It’s 45 regardless of whether you un-equip your -Nightmare gear or not. If you had tried that trick last year, unequipping the Nigtmares gear would have gotten you 28, but that bug has been fixed.

Sorry for my continued confusion. If I get me nightmares to 8 or greater during Hallowmass, I still get sent immediately to the mirror marches (or the other place whose name I do not remember), correct? So, if I am in the Underclay and NOT wearing my -2 nightmare gear and I reach nightmare 8, I go to the Mirror marches, right? I will not even get a chance to “sell” my nightmares to the “fools judgement”? What am I missing or not understanding? Thanks.

One problem. The wiki says the storylet to get into the roof beneath appears in spite, but it’s not appearing. The Sancristy of Dunstan is, but not the other.

This is something I am not sure so it’s best to have your -2 items in your permanent set. I visited the marches a few times over the years thanks to equipment mistakes so better safe than sorry!

One problem. The wiki says the storylet to get into the roof beneath appears in spite, but it’s not appearing. The Sancristy of Dunstan is, but not the other.

That was corrected over the Wiki as well: the entrance is in Mrs Plenty’s Carnival.

It’s always a good idea to be careful when equipping or removing Menace-modifying items.

I went ahead and tried the following and can confirm that it works.

First, I changed one of my permanent “outfits” to include my -2 nightmare gear and changed to this outfit. I entered the Underclay, used the “listen…” option to gain 5 CP of nightmares and did this enough times to raise my nightmares up to 9 (-2 from gear yields nightmare of only 7). I then exited the Underclay, immediately selected the “fools judgement” story, and removed my -2 gear by selecting another outfit in the sidebar (note that I did not click on “possessions” to access the outfits). This yielded nightmares of 9. I then immediately selected the option to turn in my nightmares and got the 45 Spirit versus just 28 from turning in nightmares at level 7. I did not get sent to the Mirror Marches.

My next step is to see if I do the above without removing my -2 gear if this will also yield 45 spirit. I will repot back with the results of this next experiment.