Scheme: Set up an Orphanage

This is a new option on The Tower of Eyes card. I see it’s already on the wiki.

Right now it leads to a totally empty result. I echoed the emptiness to my journal but it doesn’t show up.

Have to try it next time I get that card.

Accidental hint at future content? If it’s a “scheme”, then I assume we’re collecting donations fraudulently… I hope there’s a chance to set up a genuine, non-horrific orphanage.

I got the card again and the option was gone.

Seems like it was enabled by mistake but I do like this glimpse at new content. Scheme could mean quite a few things, not all of them nefarious.

For what it’s worth, I had a null option on Primaeval Hint until I bought a Dazed Raven Advisor and fed him properly. That is, the Primaeval Hint card was clickable from my inventory (suggesting I COULD do something with it), but didn’t show any actual options until the circumstances for its use were met. Perhaps this is the same.

Just pulled this card: the Orphanage option was not there but there was an option ‘Scheme: sell them to Criminals’ which required ‘Scheme: open an orphanage’ to be 1 :).

Just pulled this card: the Orphanage option was not there but there was an option ‘Scheme: sell them to Criminals’ which required ‘Scheme: open an orphanage’ to be 1 :).

I have the card right now with these two tantalising options: 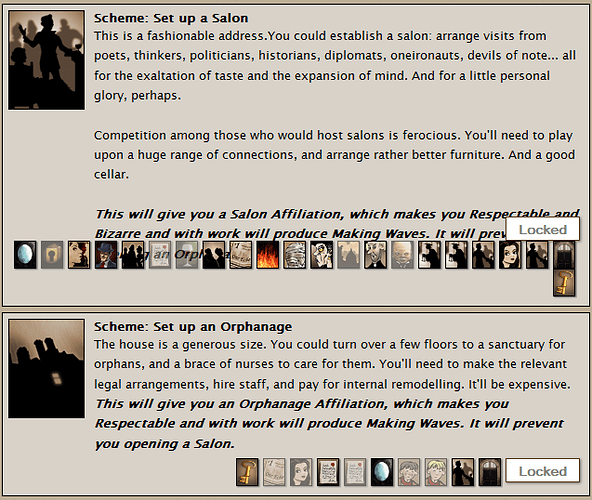 I’m going to buy the items I need and set up the Orphanage.

Too bad you can’t have an Orphanage at the same time as a Salon.

I’ll switch to Salon once it become available.

I’m just going to work on getting the stuff for a Salon: it can’t take that long before it becomes available! And getting all those connections is going to take forever oh god i have no connections on principle

Your tradesmen repaint, re-carpet, re-plumb and prudently bar a couple of the windows. Not to prevent escape! It’s not that sort of orphanage. But you don’t want anyone falling to their death. They’ll be so upset afterwards. Your gaggle of orphans streams in. They do not seem impressed. “The last place was bigger,” one drip-nosed girl volunteers. Her friend kicks her shin.

In a moment you’ll have the opportunity to name your Orphanage. Just cancel out if you don’t want to do this: you can always return to the Notary later.

I have an Orphanage now…

It does cost everything it says on the tin… Nothing gets returned.

And then there’s a bug…

I get the Notary screen but can only change the name of my ship or spouse (for Fate), no Orphanage… 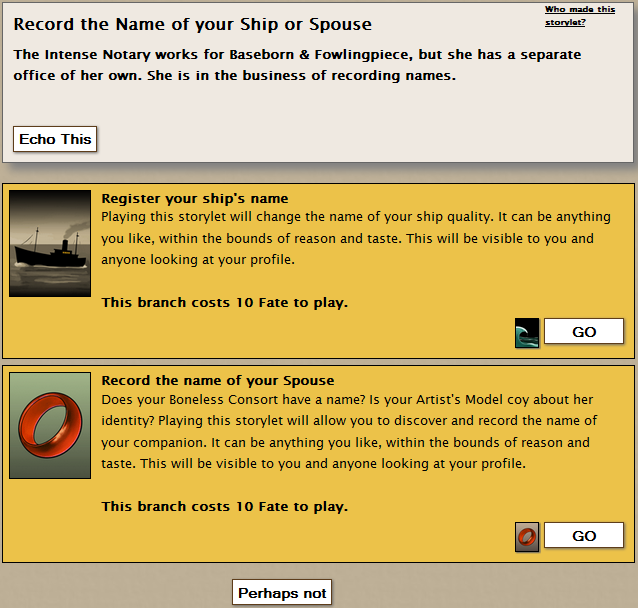 The Orphanage ends up on your extended Inventory under AFFILIATION.

Interesting interesting! Did I read aright that the Salon will require membership of a Club? If so, I shall have to pursue membership of one - bit of a bore, but I can always resign if a better one comes along.

Buying a Salon does indeed require that you be a member of good standing in a club.

I wish they could’ve given it different stats. Something different from God’s Editors…
edited by Aximillio on 8/8/2013

[quote=Aximillio]I wish they could’ve given it different stats. Something different from God’s Editors…
[/quote]

Well, after you own an Orphanage you can recruit more Orphans for 30 Echoes. It gives you 5x Scheme: Orphanage for 30 Echoes and 200 points of Connected: Orphans. No idea what it’s used for yet.

You’re quite respectable till you turn your orphanage into a Slave House. Then it becomes Dreaded +4, Dangerous +1. :P Or at least that’s how I imagine it going after someone mentioned that they spotted an option on &quotThe Tower of Eyes&quot card to sell orphans…

I’m with Sir Fred on this one. I’m going to build a benevolent home for abandoned children. Definitely not going to sell them! At worst, I’ll keep them around as emergency food rations…but not slaves! I’ll go the rest of the way and become a Tutor, too. It’s not because I wish to minimize entanglement in the Bazaar’s schemes; it’s currently the most fitting personal choice for me as I graduate from being a Campaigner. On the other hand, I have an alt who’s torn between setting up her own slave trade or starting her own fashionable salon. After all, I do enjoy reading the darker paths.
edited by Zeedee on 8/9/2013

it can’t take that long before it becomes available!

[li]
Said the archaeologist to the Gallery of Serpents…

I now have 10 - Prosperous x Scheme: an Orphanage.

I’m definitely intrigued by the Salon alternative, as in RPG my Townhouse is already dedicated to host the Pragmatic Poets Society… I wonder if it will provide something in the lines of a Persuasive boost - the Orphanage did not mention the Watchful bonus, and the Salon cites Respectable and Bizarre, so I was thinking, possibly, +2 Respectable. +2 Bizarre, +1 Persuasive? Can it be?

Also, in the case I don’t get a Tower of Eyes card anytime soon, anything more specific on the Salon’s cost? It seems expensive, I’d like to start grinding RIGHT NOW :)
edited by streetfelineblue on 8/9/2013

Seeing as we don’t have bizarre affiliations, I’ll probs get a salon as well.