I’m getting recurring error messages when I draw cards, or go to new places in London, or when I try to return to my hand of cards. Sometimes several in a row. Not quite unplayable, but it does not bode well for doing anything I’d wish to make a journal entry for. It’s only been going on for an hour or two now, but I’m concerned that it might continue all through the weekend unless someone does something. Am I alone in getting these error messages?

EDIT: I just checked a grammar site to find out that I should have used &quotrecurring&quot instead of &quotreoccurring&quot. And even though the issue is now resolved, I didn’t want to leave my erroneous grammar to be stumbled upon in the future.

I am experiencing the same problem.

I am experiencing the same problem.

Yep, crashing about every second action for me. Can’t determine what specifically is causing it; seems random.

I’ve been having the same problem lately, it seems to occur when I click on the Opportunity Deck to refill my hand or discard the cards I have.

I was seeing this a little bit this afternoon when it was annoying but fine. Then it disappeared for a while. Now it’s back with a vengeance and makes the game completely unplayable. For me it doesn’t seem to be tied to the opportunity deck specifically. I’ve had it happen when I clicked on a card, attempted to discard a card, or attempted to open a static storylet. At the moment, once a character hits it it seems to get stuck, unable to look at the story tab. I don’t know for sure how long this lasts as after a few tries I just give up and leave it for an hour or so.

Annoyingly it showed me gaining level 6 in my salon, but that was an action that didn’t actually apply. The second attempt only boosted me up to level 5.

Annoyingly it showed me gaining level 6 in my salon, but that was an action that didn’t actually apply. The second attempt only boosted me up to level 5.[/quote]
I know FBGs works hard to keep their staff’s weekends free, but really hope this is resolved before Monday. I’m still aiming for my last companion.

I’m getting this when trying to start an inventory conversion action, it keeps dumping me back to my character inventory page. I CAN click and see the story tab, but clicking on anything gives the server error.

It’s too bad though, with the timing, I know many of us were grinding notability for the festival.

I’ve gotten it doing pretty much anything, including switching tabs, doing various actions, clicking on my opportunity deck…
However, it is only doing it on one of my accounts; the other one has had not hiccups in the same timespan with the same amount of use.

This problem is plaguing me and my alt too on firefox, chrome, safari, edge and opera. It’s both puzzling and vexing.

In addition to randomly going to the Myself tab, it also gives the &quotsomething terrible has happened&quot error messages with alarming frequency like so on various browsers, even with the cache and cookies cleared: 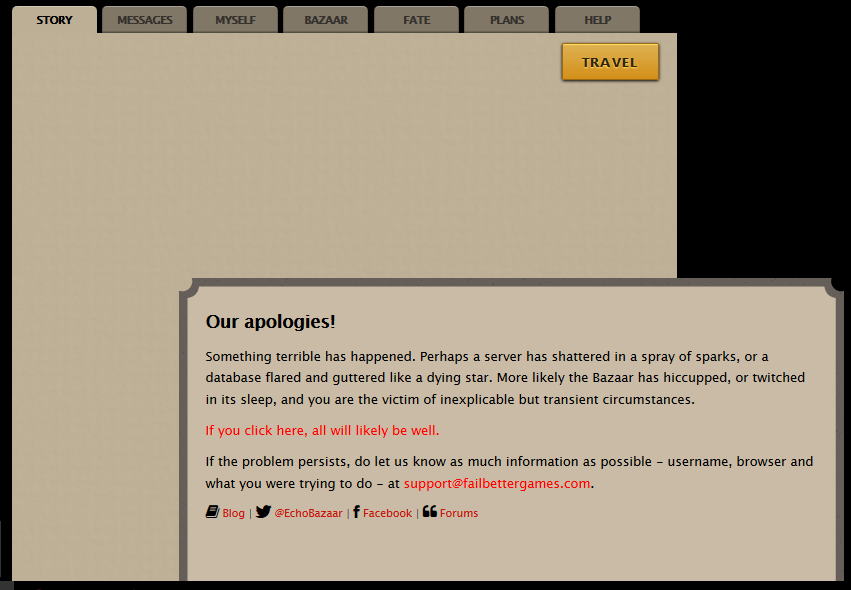 851×590 51.6 KB
After clicking &quotif you click here, all will likely be well&quot, the page will refresh and I will be taken to the Myself tab, where (if I’m unlucky), this will happen again when I click the Story tab.

It’s showing results and choices on the same page.
edited by Squidimp on 11/5/2016

I’m having issues as well, including similar results to Squidimp.

I’ve been getting the server error message when clicking the Story tab, clicking through storylets, clicking on cards, and either trying again or continuing onwards from a storylet.

I can’t do anything on my account without an error screen. Annoying since I was trying to see if I finally got my epilogue card.

Same problems. Error screen appears half of the time.

Game is currently unplayable – ever action brings up the error screen.

Same problems here on Firefox - about 2 in 3 actions bring up the error screen.

Also experiencing errors. It’s rarely letting me use an action without at least one error message.

Also getting heaps of errors here. Often multiple in a row. Worst is when trying to convert items. Will sometimes bring up the results of an action but then not apply them.