It’s the seventh of December! That means it’s that time of the year again where we perform the sacred (sacrat?) rite of Ratmas, i.e. sending as many rats as possible to any Failbetter employees we can reach in order to convey our appreciation and/or horror.

What can be sent?

Rats, obviously. On strings, of glory, whatever. We’re not prescriptivists here. Send whatever you can foist on your postman, it’s the spirit and not the letter that counts. For instance: While postmen will refuse to deliver rats to The Void, Christmas cards will arrive anywhere, as legend foretold.


Who else is Accepting Further Rats?

If there are any other FBG profiles I’m not aware of, add them below.

If you need additional help or inspiration, the previous Ratmas posts will provide. 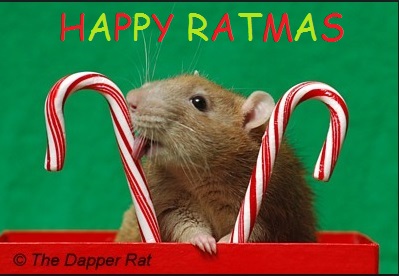 Merry Ratmas! Be fruitful and multiply the number of rats in the world. May they fill the earth and the zee and the sky.
edited by mayexist on 12/7/2016

Have a ratty time my fellows!
Let me also remind everyone of Spacemarine9’s own ratty experience, Rat Sending Simulator 2kxx(A rather short sighted name). It is the premier in rat-related storynexus entertainment.
edited by surreyjack on 12/7/2016

Anybody know how to get a rat of glory?

We might or might not get a Rat of Glory in the Advent Calendar. Possibly the Dec 7 door, but we can’t be sure.

I wasn’t aware of this tradition. Guess now’s the time to get involved!

And don’t forget to make your (living, though you can always bury the dead) rats happy at least once a year, don’t forget that rats are what’s left when you destroy evil from a living creature.

Good thing I had been holding on to that Give a Gift card! Rats it is.

We’re just showing our appreciation in the manner of cats, which is the best manner in which to do anything.

[color=#cc0099]I’m very excited and only slightly terrified for my first Ratmas![/color]

We might or might not get a Rat of Glory in the Advent Calendar. Possibly the Dec 7 door, but we can’t be sure.

Well how about that! FBG pre-emptively ratmas’d us. I guess we owe them a returned favor.

And so I’m offering this simple phrase
To rats from one to ninety-two
Although it’s been said many times in many ways
A very scary Ratmas to you[/quote][i](Posted here originally.)

“Hither, Chris, and stand by me
If thou know’st it, speaking
Yonder madman, who is he?
And why’s he rats a’heaping?”

"Sire, he is called Space Marine
He’s rallied all the forum
To send rats in numbers obscene
To try break thy decorum”

“Firstly go put up a sign:
No more rats accepting
Then send to him a candle fine
His passion’s worth respecting”

“Sire, all our delicious friends
Their spirits are inspired
For Space Marine, he recommends
That rats are now required”

“Gather round now, my good team
We can’t appeal to reason
Ratmas has become a theme
Integral to this season”

Therefore, Neathy friends, be sure
In Ratmas be believing
Send rats to the rich and poor
And rats you’ll be receiving

Late to the party, oh no! A merry Ratmas to one and all!

Only a few hours 'til midnight folks. Let’s keep this Ratmas running!
What a quirky tradition. It seems one year isn’t enough to learn everything about the Neath is it?