I had to practice my comic skills, so I though &quotwhy not make this practice a comic-journal of my chracter’s adventures in Fallen London&quot?
Lots of madness start with a &quotwhy not&quot.

These comics are as spoiler-free as I can make them, and with as little as possible actual quotes of the game. The anatomy is not shining because it’s just practice. The comics do get better as I finally pin a face model for Professor Strix. I’ll post 'em as I make 'em. 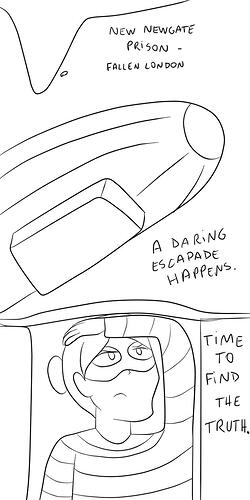 That’s pretty much me in my first trip to the Bazaar. Who needs money for lodgings when you can afford a bat. (I became an Enquirer, btw, and this dress is that Suspicion -1 plain dress.) 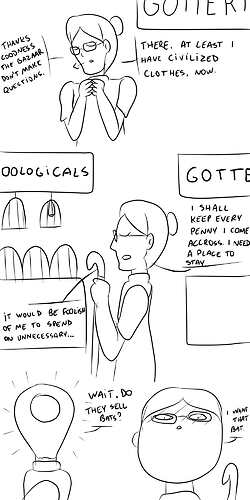 Last for today, just to get that &quotprologue&quot out of the way. And yes, my Surly Bat talks. Just about everything talks in Fallen London. Give me this one. One day, you might discover why she is so happy to get to Fallen London. Today is not the day. 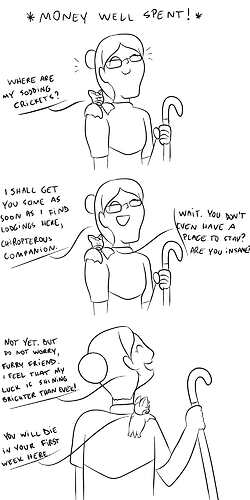 I support this bat in all of their endeavors.

Also, for future reference, putting the pictures in a spoiler tag would probably be nice for people who aren’t looking for this. They are kinda big.
edited by suinicide on 3/22/2016

[quote=suinicide]I support this bat in all of their endeavors.

Also, for future reference, putting the pictures in a spoiler tag would probably be nice for people who aren’t looking for this. They are kinda big.
edited by suinicide on 3/22/2016[/quote]

Thanks! It was a silly oversight of mine.
And bats. They are useless, and still the best pets.

Don’t worry about dying in your first week. Most of us do and we almost all of us got better.

What a treat! More, please!

@Shadowcthulhu, I’m not worryed, but people around me when I die should be. @Meradine, glad you liked. I’m on strip 8 as we speak, I will post them in pairs until I catch up, so I don’t flood the topic too much. ^^"

And yet, the Mushroom Epic, as I call it, is my favourite mission on Veilgarden so far. 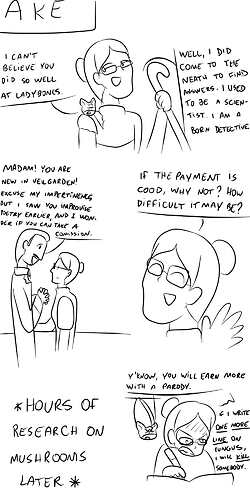 I thought that a 5ft intellectual woman should be Watchful plus Persuasive, because duh.
I was so laughably wrong. Stupid Persuasive career. Stupid Veilgarden. Stupid Society.
Let’s get Dangerous! 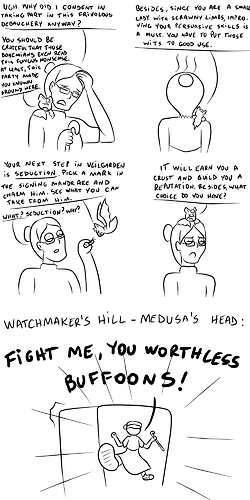 Yay! I just started playing today and I like the dangerous quests too! I already got a grey gown from the salary money.

I like those comics. The bat is a fun snarky sidekick.

Wow… if I troed to recreate this with my characters… the drawings would be horrible. But I love the comic. I guess the poor Bat is right though, expect she won’t be dead in her first week. She will be dead in a day. In game, I offer my services for sparring, though.[li]

Thanks for the kind words, people. Welcome, @Zoe. @Felix, the bat appreciate you sweet words, but he still hates you. It’s not personal, he hates everything. @Rysiek, ohoho, let’s see about that.

Dangerous training only hurts the first hundred times. . .
If you want, I can also spar.

This is for all people that were unnerved to see a 5 ft frail woman enter face first in Medusa’s Head. 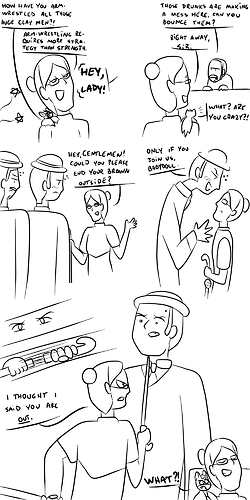 Note: This isn’t the tasseled sword-cane. This one was my personal (and secret) arts & crafts project in prison. It looks a little rough, but that’s intentional.

Wow… if my chars tried that… there would be bullets flying… or a english, secretely perverted gentleman… anyways, I love your comic.[li]

Prison arts and crafts. . .I still have my first shiv for ornamental value.

@Rysiek, I think I’m a little more subtle. And I suspect the recoil for guns would probably wound me, alas. @Shadowcthulhu the rough sword-cane is just a bigger and improved prison shiv.

(Now, for one of the moments that made me laugh aloud: ) 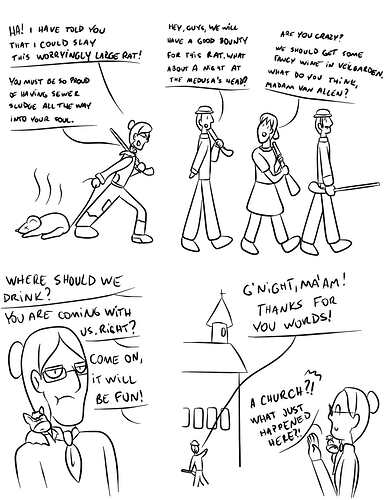 (I HAD to choose that option because frankly, the WTH factor of getting a bunch of thugs to a CHURCH, so YOU can preach to them was just too funny. Besides, Fallen London gives you very few opportunities to mingle with people without drinking, so you gotta cherish what you can have.)
edited by Professor Strix on 3/24/2016

For most of my characters (expect Maria), subtlety is as foreign as England. And I agree. I think I went for drinks though… I can’t await the raid on the brass embassy… or the rings… I think I would skip the spider council, though…[li]