[color=#0066ff]Delicious Exceptional Friends! Your Exceptional Story for October is here![/color] 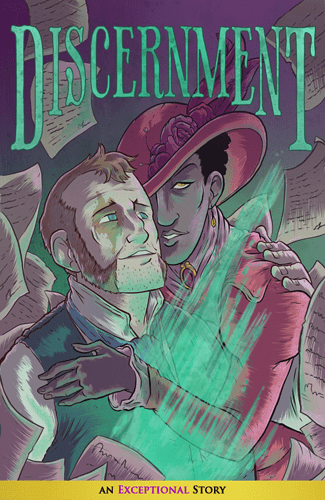 [color=#0066ff]The stolen soul of Salome. An exclusive Ladybones Salon where devils compare their collections. A man with a cosmogone birthmark.

Explore the trade in high-end souls and meet a Discerning Deviless in this story of love and infernal theology.

Play An Exceptional Story: Burglary of a Cartographer’s Estate to begin.[/color]

[color=#0066ff]Discernment is by long-time contributor to Fallen London and Sunless Sea, the wonderful Em Short.[/color]
[color=#0066ff]
And for the first time, we have a piece of guest art in Fallen London! The Discernment promotional image and character avatars are by Mark Penman, an illustrator, comics-maker and lecturer in Game Art from Manchester.
[/color]
[color=rgb(0, 102, 255)]Please remember to be liberal with your use of spoiler tags when discussing this story. If you’re unsure whether something is a spoiler, use the tag! Here’s a reminder of our position on spoilers and guidance. [/color]
[color=rgb(0, 102, 255)]
In addition to a new, substantial, stand-alone story every month, Exceptional Friends enjoy:[/color][font=facitweb-1, facitweb-2, ‘Lucida Sans Unicode’, ‘Lucida Grande’, sans-serif][color=rgb(0, 102, 255)]

Just finished this. It was written very well - but, at least in the path I took, it was rather short.

I refused to bring the Bishop to the Deviless. There is no circumstance under which my character would do such a thing, particularly considering how heavily the Deviless implied that she would harm the Bishop. My character is Closest to the Church, a Shepherd of Souls, and despises the work of devils. It was a bit disappointing to have the story cut short. I would have preferred it to continue in some other way and forego the reward.

I also just completed it. I enjoyed the writing, and the content was well matched to my character.

[spoiler]As a Soulless Spirifer, the fact that the storyline centred around a Soul was great, and I enjoyed the extra choices available. I do sometimes have an internal battle with some choices between those I want to take, and those that use qualities that I only have due to fate-locked storylines and such. This particularly effected my final choice - I wanted to convince her to do the abstraction anyway, but in the end did it myself due to the fact it was ‘special’. Oh well, I’m sure the memento will look good on my mantlepiece… I’d hoped I might shift it with Hell’s Fence though.

[quote=Zareen Bakara]Just finished this. It was written very well - but, at least in the path I took, it was rather short.

Glad to see that I wasn’t the only one who refused to assist the Deviless. No one intimidates me, especially with something so feeble as menaces.

While I liked that there was a extra tidbit for those who owned a Coruscating Soul, I also wish I could have continued with the story. After doing the Fidgeting Writer carousel so many times you get a bit addicted to hoarding and selling souls.
edited by Blaine Davidson on 9/24/2015

(Edit: nevermind, I misclicked and locked myself out of further conversation, darn it! Thank you echo-ers.)
edited by an_ocelot on 9/24/2015

Does refusing the woman’s demands lock you out of the rest of the story?

I refused the Deviless at first. Then, I decided to go along with her a little longer, to see if an opportunity to more skilfully undermine her agenda presented itself. It did.

Also, on playing through as Hubris, I just ran across the Infamous Bore, who may be my new favourite background character.

Fascinating and good to know, Frederick Tanah-Chook! Thanks!

Thanks for the echoes in your profile. That’s just the sort of outcome that I actually would have wanted. I just didn’t want to agree to go along with the Deviless without knowing whether such a chance would be available. If my character was locked into doing something so awful, I would have been appalled. If the game had given the option to go along with her plan while specifying that I intended to undermine it - thus telling me that I’d at least have a chance to do so - I would have gone with that.

Didn’t run across any opportunities to increase quirks past 10 in my path.

I figured, she’s only a deviless; one of the most terrible creatures on this Earth, under it, or elsewhere. I could take her. And I could take her just as easily from within whatever scheme she’s cooking up as outside it - probably moreso, in fact.

So you could - and so, in my opinion, could my character. But that doesn’t mean the game would necessarily operate from the same view. It doesn’t (indeed, can’t) give us the chance to do everything that we’d want. You were braver than I was in taking the chance that it would in this instance, and were rewarded. At a meta level, I should have known that the Bishop would at least survive, since he is needed for other advanced stories, e.g. the Dilmun Club. But the way the deviless was talking, I was not expecting him to just be able to walk in and walk out, unharmed. Glad it proved to be so.

[spoiler]Oh, it was absolutely a gamble. And if something terrible did befall the Bishop, well, it wouldn’t be the first time a major character was replaced with a fill-in (nor the first time the Bishop was involved in a similar snaffling of identities… but that’s by the by.)

Incidentally, I’ve just achieved a moment of legendary villainy as Hubris, as befits him. I like this story.[/spoiler]

I liked it. I always like conversations, and I liked that some past RP decisions could come through and that I could extend the story and still make reasonable RP decisions for myself.

Very mild spoiler about the mechanics of investigating a salon:

I didn’t realize I’d lock myself out of various storylets so quickly, so I’m sorry I didn’t try showing off my silent soul when I had the chance, but that’s a minor thing.

Pleasant enough but short. I was able to achieve an outcome consistent with my character.

Could someone please PM me the result of having a Coruscating Soul? I would like to know if I should try and get one before progressing. (Yea, I know it’s probably not such big of a deal).

Very interesting! I like how the relevant fate-locked stories had their own options, which made this story feel like a natural progression of the way Mathieu developed.

Hmm. Asking for expenses - and my thanks to those before me who established that doing so does not compel me to actually assist the Deviless; Hell is the one connection I have tried my hardest to delete - got me an odd glitch:

…Anyone else have the same issue?

It would appear the same issue occurs when you ransack the cartographer’s home in the non-fatelocked portion of the story, though I can’t actually confirm that it reduced the amount of either item in my case.

Regarding expenses I must add that delivering the soul of Salome gave me much lower monetary returns than the value of the soul itself instead of a higher value; maybe I misread the text.
Otherwise I really enjoyed the story, I think it´s my favourite exceptional story so far, tied with The Gift.

[color=rgb(61, 60, 64)][font=Lato, appleLogo, sans-serif][color=#e53e00] The stray minus sign is in appearance only - being fixed, if not already fixed, now. You will still have got the correct number of items.