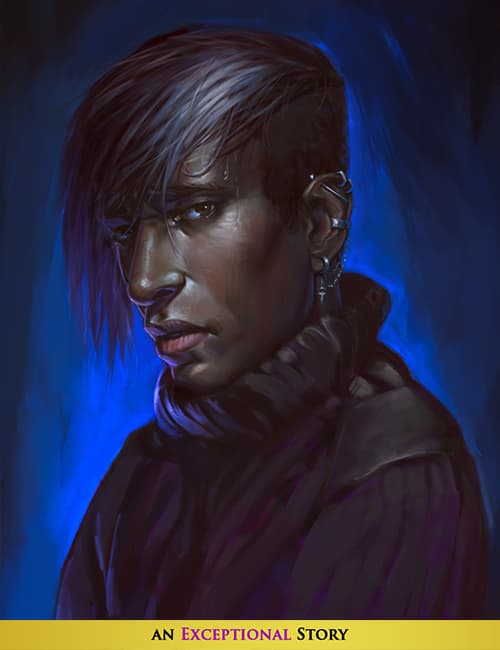 It may not be profitable. It will be dangerous, possibly mortally so. But if I do not go, then the last vestiges of a great nation will die at the Prester’s command. And if I go alone, I face certain failure.

A lost city, submerged for generations. A great act of love and rebellion. A despot’s wrath. And the quest for a grail… The bright forces of the Presbyterate mobilise to reclaim a forgotten legacy and rewrite history. The Morbid Archaeologist will not allow it – but they cannot stand alone. Journey across the Unterzee and delve into the depths of history in ‘The Exile’s Chalice’.

Well, I’m thoroughly enjoying this. I’ve reached the point where I have two decide between two types of wood, and wondering what the effects will be.

Almost but not quite done with this, and I must say: The Prester has done a fantastic job of somehow coming across as pettier and more actively malicious towards individual humans than an actual Judgement. I regret nothing about setting up the Morbid Archaeologist to bring him down, and making life as difficult for the Gracious along the way.

Even if I hadn’t ground out thousands of damned echoes for the taste of immortality, I’d have less than no reason to even consider reconciliation with his forces.

Sod his precious Design. I hope it all goes to Hell. Possibly literally.

I enjoyed this. Story was easy to follow, but still intriguing.

Well, this was lovely. Just reading the conflicting descriptions of the Gracious was interesting in itself, but I have a soft spot for history and archaeology, so this was right up my alley: an exploration into a mystery writ large.

And I liked how one is encouraged to explore by having it cost no actions and have no consequences. It adds to one’s immersion. (Perhaps this has been done many times, but I’ve played next to no stories more recent than several years old.)

Also contributing to one’s immersion: playing the last part of the story while listening to the score of Lady in the Water. The “Prologue” is surprisingly appropriate for the point where you discover the McGuffin.

I’ve reached the point where I have two decide between […] and wondering what the effects will be.

I chose the dark wood, which struck me as a more plausible effect, and I was pleased with the result. I’m interested in reading the alternative, though.

Absolutely loved this one (it’s always good when I’m agonizing over every choice). It’s always great to see more insight into the Eldar continent and find some truly glorious places.

Did anyone suceed in passing the roll when caught in the trap? I’d be interested to know how much of the story changes if you are actually able to slip away, or if it’s just a text change.

I have the bright wood result echoed on my journal. If you recorded yours too, I’d love to read it.

Ah, thank you. I see you’ve also encouraged the Archaeologist to resist in the Presbyterate instead of spreading the story, as I have. And the wood you choose also affects the Epilogue a little.

My journal is here, and nowadays I try to record the branch titles as well.

Also, I’ve found ten different results while exploring Mereid; I’m fairly confident there aren’t more of them. And the letter I received at the beginning is also different from yours: I was headhunted as a fellow archaeologist. Story begins here:

So, can you visit Orchard House to see the loaned artifacts, or am I wasting my time looking for it?

When confronting the Gracious, I tried to escape with 4% chance and I remember succeeding. I know it sounds impossible and I have no screenshot of it, but here’s an echo in case anyone is curious.

I’m not far into this yet, but I’d like to mention that the text actually referenced the fact that I have a zub (and offered an action based on that). Again, it assists immersion. Wonderful attention to existing character detail, kudos.

There’s maths for you: it’s only impossible if it’s 0%, hehe. I did imagine that the result wouldn’t be functionally different, but I appreciate the extra bit of writing. Thanks for sharing!

When talking about a possible reward for this venture in the beginning, the game alludes to my already gained immortality. I’m not sure whether this refers to my Cider or my finished Ambition. There is a reference to my Cider later.

Overall, this was spellbinding. ES seem to have moved to another level these days in terms of complexity and storytelling, even language.
There are some ES that you play through and would be entirely happy to replay, or indeed do play again, to take a different route and see events unfurl in alternative ways.
In this instance, I found that almost impossible to imagine. The nature of the story, the characters and the lore (not to mention the skill in setting the mood) drove towards certain choices, and I simply couldn’t contemplate making others.
From what I have seen of other people’s playthroughs, they seem to have made similar choices between optimism and pessimism, reconciliation and anger.
So I wonder, is there anyone out there who took the other story branches (reconciliation primarily). Did anyone feel grossly betrayed by the archaeologist? Anyone take the Prester’s side? I’d love to see the text and discover how the story worked out.

It’s the first exceptional story I played, and it’s definitely… nice. I still think that prices are expensive, but the story was nice. Are other ES also as good as this?

Well, they vary. But there is agreement on some being very good indeed. If you check under the Fate tab, you’ll be able to see which ones the community liked best.
For more detail, you could also check the threads for the individual stories on here. People are pretty up front about ones they don’t like or narrative developments they consider unfair.
There was one I remember about running a restaurant kitchen – 'nuff said.

Well done, Barse! This took me almost a week to play through… great immersion, great writing, a huge load of Elder Continent lore - in fact this story seems absolutely huge, it might be one of the longest ever? It definitely ranks with the very best ES out there!