Oh, but you don’t understand the genius of failbetter! You CAN draw the new professions card instantly…for fate. You can get notability increase card if you have 15 making waves. It can be bruteforced if you have enoggh resources…

Even MORE genius, I’ve paid nex for that card twice and failed both times (my fault, impatient, betted on a 77% chance). I’m now going to do it the slow way. :-p

I don’t know about the Fate option (But I would not spend Fate on this anyway. I have a general policy of not encouraging unfun game mechanics with money), but AFAIK, you can not brute force the Unsigned message to appearn no matter how rich you are. And without that card, you can not actually use the Notability you have.

No, you can definitely force-draw both the Amanuensis and the Unsigned message with Favorable Circumstances.

The unsigned message is the one you use Fate to buy. (Under Write Letters at your lodgings)

I was fortunate enough to already have a favourable Circumstance when I got my second point of Notability so forced the Unsigned message. I have only seen it twice since and managed to get one Surprise Package from it.

This whole thing does feel very unbalanced. The unsigned message really does not turn up frequently enough for people who want to upgrade their profession. Getting enough Making Waves to get Notability is also card dependent[color=#c2c2c2]. [/color]
edited by reveurciel on 9/1/2013

No, you can definitely force-draw both the Amanuensis and the Unsigned message with Favorable Circumstances.

Thanks for clarifying. Wiki does not have the Unsigned message in the list here http://fallenlondon.wikia.com/wiki/Category:Favourable_Circumstances so I thought they were unrelated.
I still have that one Favourable Circumstances item we got from the access code. So I guess I can skip the whole card drawing thing for once, if I am willing to spend it. Just need to grind to Notability 2, I guess. Notifications, here I come -_-

Editing all my messages on this subject. I can’t see how to force the Unsigned Message - either because I have no Favourable Circumstance or have already upgraded my profession. Sorry for the confusion but the option was under Write Letters when I had Notability 2 and a Favourable Circumsatnce.

When exactly does Notability drop btw?

Approximately once a week. I think it is at a different time for every one. You get a message
“Time passes; memory fades; pain departs. [Your Scandal and Notability decrease, and your Making Waves decreases greatly. You’ve healed some wounds, and lost any irrigo you may have.]”

Is the Lodgings force-draw option of an Unsigned Message normally visible to players who have no Favourable Circumstances?

Yes? I have no FC. I have never seen it. Did I just not check at the right time (Notability 2+)?

No? I won’t be able to add it to wikia FL because of the fate-locked policy; you can only get FC through a fate purchase these days.

It’s invisible if you don’t have a Favorable Circumstances, yeah. Which seems a bit weird, but that’s how it is.

Removed my error. See fuller apology below. My only excuse is that I was tired and didn’t read the options closely enough. I can only see another way to force Slowcake’s Amanuensis.

huh
I couldn’t see it, and then I bought a Favorable Circumstances, and then I could. But that was a while ago so it might have changed.

Either that or I’m thinking of the Amanuensis one.

While I trust you both, you’re making my head spin. @_@

While I trust you

I wouldn’t if I were you! You’re making a big mistake!!!

anyway um i think one of the options might be invisible if you don’t have a favorable circumstance and the other one might be visible??? maybe??? I dunno.

I wouldn’t if I were you! You’re making a big mistake!!![/quote]That only makes me want to trust you more!!!

Sorry I’m wrong and Spacemarine9 is right. That what comes of posting when you are tired.

Just had another look and it looks like I can just see another way of forcing Slowcake’s Amanuensis not the force draw for Unsigned Message. It was under Write Letters at your lodgings when I used it but it might have been locked as I no longer have a Favourable Circumstance or have already upgraded my profession.

many many apologies for the confusion, just didn’t think, read the text properly or something.

I have Favourable Circumstance right now and I do not see any new options, just what you all observe. Clicking on it just opens the same Writing Letters storylet you get from you lodgins (so Zeedee, I think you can safely add to the wiki what FC does, the only thing that is fate-locked is the option to buy more of it with Fate).
I’ve played &quotArrange a visit from Slowcake’s Amanuensis&quot before and, I think, it did not require FC, only Making Waves (I could be mistaken, but that would mean I had two FC before. And I did not buy any, the one I have is from access code). Now it does. This is just… great.

Whatever, I give up on the whole Notability thing. It’s confusing as hell and requires way too much luck. Guess I’ll just live in obscurity.

Speaking about lodgins, there is a new time-limited storylet there, that is available at Wounds 2.

From what I can see, there are two ways to force-draw the Amanuensis card. One is under the Write Letters storylet and requires Favourable Circumstances. The other can be found under the Attend to matters of society and scandal and it requires Making Waves 15. I can see both, even though I don’t meet the requirements to unlock either one at the moment. 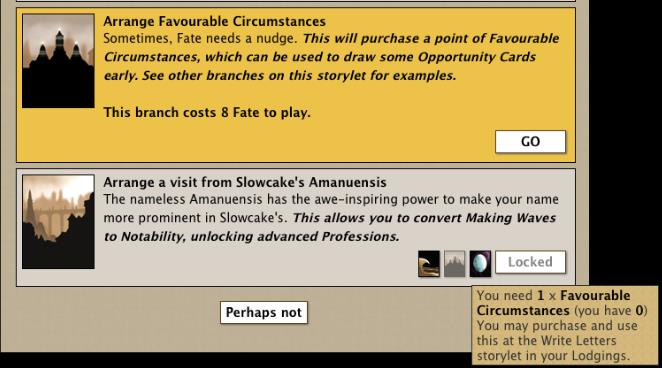 I’ve recently used the second option and successfully upgraded my Profession to Mystic!

Ok. I am really sorry. I must have been blind. Or suffered a critical failure on my reading comrehension check.
Those are both called Amanuensis, but they do different things. I used the one from &quotAttend to matters of society and scandal&quot before, and mistook the one in Writing Letters for it. But now I am reading the description and see that this one allows you to use your Notability.

Also I checked &quotA visit from Slowcake’s Amanuensis&quot card, and now increasing Notability seems much easier. I am at Making Waves 3 and have 90% chance of success (18 points of respected/dreaded/bizarre).