Most bizarre/pointless activity you've engaged in?

So I just decided to take the Keen-Eyed Lapidary up on her offer to make a bejewelled Cane. I was short 2 venom rubies and 3 sapphires, so I went shroom-hopping for the venom rubies and then lizard-throwing at the Carnival for the sapphires. In the process of garnering three sapphires, I probably used 40 turns or so and gained 22 sulky bats…

And the bejewelled cane isn’t that great anyway…

How about bringing Casing all the way up to 57, to be able to steal premises at the bazaar all in one go.

I am going to literally steal the bazaar (or at least a small part of it)!

when you die, you get to meet the boatman. so i intentionally die just to meet him.

here is how i imagined the boatman

from the picture above. i imagined him as a dutiful man who’s just doing his job. he asks no question and will do anything the passenger want (other than going back to the living). he also looks like a badass and only sends the passenger to the dead world. no hell no heaven, the netherworld. he has no connections and he only does things what he feels right.

thats how i imagined the boatman. so i gazed into a mirror and die.

it doesnt help when you fail a dice game. he grins ALL the way BACK to his head. creepy
still worth it because i got the courier of the dead story.
edited by Snado on 8/30/2016

I ground for an Impossible Theorem, just 'cause I’m a fan of contradictory truths in general, and thought it would be a lark to have one of my own. I was right.

Seeking purely to destroy my lodgings- i believe i will have spent 6000 echoes minimum before I actually get to beau’s candle.

I have to admit to some temptation to that myself Grenem. It’s the only way to get rid of them isn’t it? I mean, it’s a terrible reason to Seek … or is it …

i got a memory of light. i decided to intentionally go insane to visit the mirror marches mainly to listen to the music and capture the location image. i still have yet to experience most of the march.
well, i want to at least go to every menace area once. is going to the state of some confusion worth it ?. i dont care about my dream qualities

I have to admit to some temptation to that myself Grenem. It’s the only way to get rid of them isn’t it? I mean, it’s a terrible reason to Seek … or is it …

It is the only way to get rid of them. however, unless you’re willing to spend ~1000 echoes per effective standard card removed, you probably would be better off waiting for selling them to become viable. Even at the cheapest, you’ll need to both die and go to jail seven times, stain your soul seven times- costing about 110 echoes in laudnaum- spend at least 98 actions and 910 echoes on betrayals- assuming you only betray real players- or i suppose you could exclusively betray nomen, but that’d add up fast. And that route would involve about 20 weeks of waiting, so it’d be too late to pull that off and get a christmas lodging. [not to mention that you’d need to repurchase at least one lodging. premises at the bazaar would be a good place to start, along with whatever low-level lodgings appeal to you… however, you’d need to go with a 4-card deck until christmas, which would not be pleasant or trivial.]

The only reason I’m bothering is because I value optimization more than its inherent value. While Destroying these lodgings would doubtless pay off in the long run, the wait would be large enough that it’s likely- almost certain- that it’s not actually going to pay off in any substantial way, insofar as echoes are concerned, at least.[i]

I thought this thread was about in general pointless activities until I read the responses and noticed where this thread was. SO I’ll list a few of the things I have done in Fallen London out of boredom or lost on what to do next:

Boatman’s Opponant 40 and 30 Searing Enigmas (for an Impossible Theorem) all before buying an Overgoat. A really terrible idea (particularly since I’ve ended up selling the Enigmas for the goat)
edited by Parelle on 8/30/2016

The most recent pointless thing I did was obtain 777 Sun-Stamped Mirrorcatch Boxes for my mantle, and right now I’m working on maxing out Advancing the Liberation of Night.

My Alt collected a total of 41 eyeless skulls over many months of grinding Seeking Curios in the Forgotten Quarter only to convert them all to Ray Drenched Cinders and sell them when Seeking returned as part of buying a goat. And then it immediately halved it’s watchful thanks to a miss click which negated the whole point of the sale. The goal was to get to 77 but alas the Northward call was too strong.

On my main account, I spent several years worth of collected coffee and feasts in the mad rush to Courier’s Footprint just so I wouldn’t have to wait for a second mood card. And it’s not like SotC 21 does anything for you. There’s also that Noman tattoo. And you don’t want to know what I went through to find that eggshell on my mantelpiece.

Bringing Making Use of Bats to 44 (I’m almost at 50, yay!) and keeping all Sulky Bats. It doesn’t give me any profit (because I’m not cashing it in); it’s just an enormous action sink (1275 actions) just to have the bragging rights to say that I have an army of well-trained and efficient messenger bats.

I ground Empire Kingmaker to 77 (and then purposely got Turncoat 4) and Nevercold Brass Slivers to 77777 for my mantelpiece.Just because. I plan to stay nice and warm once I go North.
edited by th8827 on 8/30/2016

[quote=Grenem]Seeking purely to destroy my lodgings- i believe i will have spent 6000 echoes minimum before I actually get to beau’s candle.

no regrets no regrets no regrets.
edited by Grenem on 8/30/2016[/quote]
I’m doing the same, plus I plan on sacrificing seven Fluke-cores for Cerise because Science. I’m also trying to grind for Cider before I visit Winking Isle, but Science comes first.

bringing Casing all the way up to 57

Quite an achievement! Closest i came to you is 50 during my quest for mysteries for a room at Beth

Grinding my connected urchins with the speak softly option. 202 and counting. . .

Grinding out 900 echoes (a small amount in the grand scheme of things, but it seemed long at the time) to purchase 77 sorrow-spiders solely so I could RP growing a spider-council under my lodgings. 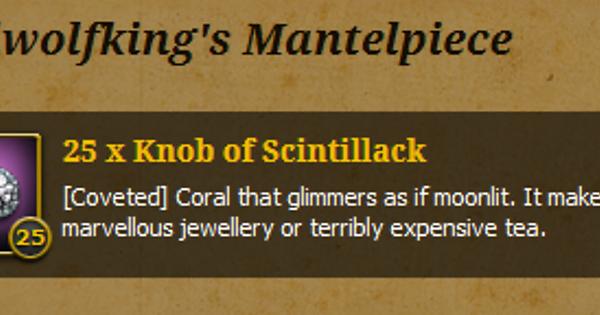 …It’s not as much as I was planning to get, it was worth 3 times more than I expected, but it’s still something(goals to 77 will always fail, turn back).

Hands down, coveting two London street signs and selling the rest for the expressed purpose that they are for Portobello Road and Marleybone Street. Why? No reason.

As for a scheme that is more or less pointless, I plan to begin collecting ALL the lodgings. No real reason. I just want my character to have his collection of places to relax and reside in. Also, I still can’t decide whether to get a shop at the Bazaar, a Suite in the Royal Beth, or a guest room in the Embassy so I decided to just go for ALL of them!