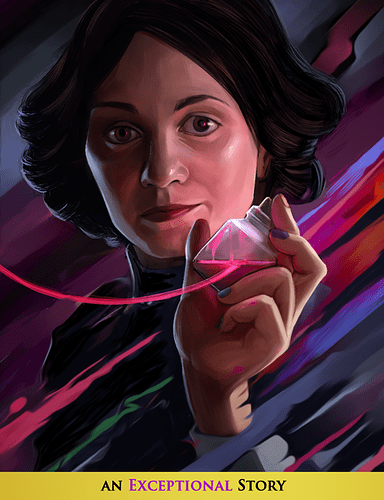 500×650 381 KB
[color=#0066ff]
[/color]
[color=#0066ff]Artists and the literati rejoice — a pen show visits London! Nibs as numerous as a battalion’s bayonets! Inks, in all the wild colours of the Neath! Try them to your hearts content! What’s that? Rumours of stolen memories? Utter nonsense. Come, and look at all the lovely pens.

Shades of Yesterday is the first story in the Season of Endeavours and was written by Gavin Inglis. In this season you will experience three stories of high adventure, derring-do and mystery across London and beyond!

Access to the House of Chimes: an exclusive private members’ club on the Stolen River, packed with content
An expanded opportunity deck: of ten cards instead of six!
A second candle: Twice the actions! 40 at once!

Finishing all three stories in the Season of Animals will make you eligible for an additional opportunity, to follow.

If you want to keep an Exceptional Story beyond its release month, you must complete the related storylet in the current Season’s card. This will save it for you to return to another time.[/color]
edited by babelfishwars on 2/27/2020
edited by James StAnthony on 2/28/2020

Correspondent！The Iron Correspondents！The Neathbow！There are so many colors in London, and what will I see this time?

I am waiting for my candles to fill up before playing but I must say I appreciate the art: though I don’t mind social anachronisms, the too-modern haircuts in previous stories had done my suspension of disbelief no favors at all! So hurray for the not-flattering hairdos of yesteryear.

I unlocked the story, but don’t see it appear yet. Is it like that for anyone else?

I unlocked the story, but don’t see it appear yet. Is it like that for anyone else?

Same here, it says &quotThe Kaleidoscopic Watcher&quot should begin anywhere in London but I can’t find it at all

Check Veilgarden. Unlike most ES’s, the first step in this one seems pegged to a specific location. I kind of prefer it, aside from not being used to it.

Well, the deed is done. She stole my memories. I rewrote her lover, and stole hers in turn.

And yes, it does feel rather godlike.

Gotta say, as a Correspondent, I’m very disappointed my chosen profession had absolutely no effect on the Exceptional Story. If my man Chandler had written I know there would have been and more.

This was a very fun story, but I wish that FB would institute level scaling for Exceptional Stories. There’s a moment where you can chose between a high risk high reward option and a low risk low reward option, but they were both 100% challenges for my character, and she wasn’t even wearing the proper clothes at the time! Breezing through a story will all 100% challenges makes the whole thing less satisfying.

That feeling when you asked what color Violant is and the game writer says “red” but then the very next time you see it mentioned, it’s called purple…

I enjoyed this, I’ve always liked anything Neathbow related and wish I could collect more items relating to it.

I restored her ex-lover as closely as possible. The poor thing, he was so sincere in his affections and she took advantage of him.

I must be getting soft.

PS Indeed,a tiny extra something for auhtors/correspondents would be appreciated, but I loved it as it was.

[color=#0066ff]An additional note about this story: the Season of Endeavours will be the last season to function in the current implementation (a hub, three separate trade-in items and a trade-in story). We have something else planned for future stories, which is still in development. More news about it before the end of the season![/color]

Is there any purpose to buying a pen? My indecisive self is currently debating.

Has someone tried the new personality option? Also, the pen seems to change some flavor text later on, not sure about other changes at the end of the story

I enjoyed this one a lot. I liked the mystery of the inks, and the climactic events of the story reminded me positively of Noises From Upstairs.

I liked learning about the Entrepreneur through the ink battle. She’s an absolutely vile person, and I wiped her memory without a second thought. I was wondering if Peter had some kind of relation to Storm because of his facial markings, but I suppose that it must have been a residue of the inks used by the Entrepreneur to rewrite his personality. I hope that sending him off to government was the best choice for him. At least she can’t mess him up further. Finally, it was really cool messing around with those Neathbow inks at the end.

It’s interesting that this will be the last Season. I’m curious about what will come, but I’m sure we’ll learn about it in a couple of months.

[color=#0066ff]An additional note about this story: the Season of Endeavours will be the last season to function in the current implementation (a hub, three separate trade-in items and a trade-in story). We have something else planned for future stories, which is still in development. More news about it before the end of the season![/color]

I am somewhat sad the New Pen quality doesn’t reflect the unique one you purchased (or the one she presumably slips on you if you refuse) but also relieved. If it did, I’d be very reluctant to trade it in at the end of the season! I went with the Rubbery model for obvious reasons. Possible merchandising opportunity? Either way, I’d be all over that pen show if it occurred in Surface London, do so love fountain pens and inks, I use a Lamy All-Star myself with a special Diamine ink.

I’m glad to hear the seasonal tie in system will be changing, not that I disliked it, but did always wonder about wanting to keep certain items for fun. Look forward to seeing how future ESes occur!
edited by Indigo Clardmond on 2/28/2020

Cool character but its a shame we could only let her go at most; her scientific advancements could lead to all new flavors and colors of honey. I would have liked to keep my pen too (with the ink switched out for a less cognitohazardous ink, of course)

Cool character but its a shame we could only let her go at most; her scientific advancements could lead to all new flavors and colors of honey. I would have liked to keep my pen too (with the ink switched out for a less cognitohazardous ink, of course)

Same here. I really wish there was an option to take all her research for yourself. That’s the only in character thing for the Spidery Marchioness.