[color=#cc0099]Delicious friends, the Exceptional Story for June is here! 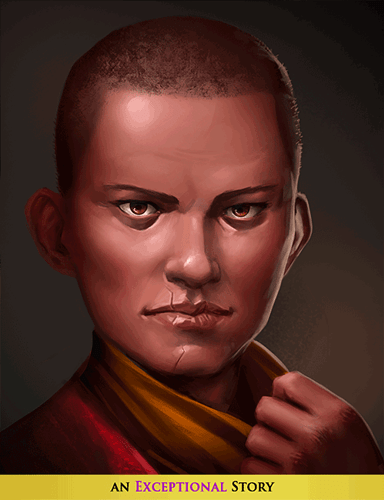 Relics of a mysterious Fourth City Cult have disappeared, sparking a desperate scramble to reclaim them. A scarred Khaganian competes with a one-eyed, spidery Seamstress. Choose your alliances carefully, and be ready for a confrontation in the Forgotten Quarter.

Web of the Motherlings is the first story in the Season of Ruins, and was written by Graham Robertson. This season, experience three stories involving the cities that fell before London. You can begin each from the Season of Ruins: Tormented Dreams card.

At the end of the season, players who have completed all three will take a step further, unlocking bonus content concerning the Manager of the Royal Bethlehem Hotel, and the thing that has taken roost in his oldest dreams.

Finishing all three stories in the Season of Ruins will make you eligible for an additional opportunity, to follow.

If you want to keep an Exceptional Story beyond the month it’s for, you must complete the related storylet in the current Season’s card throughout London. This will save it for you to return to another time.[/color]
edited by Absintheuse on 5/25/2017

Of all the seasons we have had so far, this sounds like most intriguing yet. Up there with Heartsblood and Skies for me. And this story sound immensely fascinating. The art looks awesome and the premise of the story even more so!
I can barely wait until my actions have refilled enough for me to play it :)

Why did I decide to head to Flute Street to grind Rubbery Favours on the morning the new ES drops? Truly, I am an idiot.

[color=#ff9900]Support ticket, please. Forums aren’t a medium by which we can efficiently diagnose and fix bugs.[/color]

What?? The Manager of the Royal Beth wants me to help him with his dreams??

Is there an “F you and the horse you rode in on” button? :P

Well, hopefully at the end of the season there’ll be an option to take the three items he needs and burn them. Preferably right in front of him :P

Barely dipped my toe in (just enough to make sure I don’t lose it), but the new artwork is very different, almost jarringly so, to what I’ve become accustomed to in FL. I do like it, though. I almost wish all the little pics we get had been done by this artist. Some of them are quite rough and cartoony by comparison.

Edited for appalling spelling mistakes.
edited by Plynkes on 5/25/2017

Barely dipped my toe in (just enough to make sure I don’t lose it), but the new artwork is very different, almost jarringly so, to what I’ve become accustomed to in FL. I do like it, though. I almost wish all the little pics we get had been done by this artist. Some of them are quite rough and cartoony by comparison.

Toby Cook is a new artist at Failbetter. I agree, I like the new artwork a lot. Very striking.

I’ve only unlocked the new story and I play slowly so I don’t have much to say yet, but it’s off to a good start. I get the feeling as a new player that a lot of details are going to whoosh right over my head, but most of the regular game is like that already so business as usual I guess, heh.

[quote=Kukapetal]What?? The Manager of the Royal Beth wants me to help him with his dreams??

Is there an &quotF you and the horse you rode in on&quot button? :P

Well, hopefully at the end of the season there’ll be an option to take the three items he needs and burn them. Preferably right in front of him :P[/quote]

[li]
At least we get to lie to him at the start of it.

Usually each season has 3 storys and for each you receive an item. Another story appears so you can trade in the items you receive in the previous 3 stories.
I have a question about the previous season trade items story. Where it was?

It does not seem to be out yet. But I expect it will be soon.

Do you get access to this if you only played 1 of the 3 stories or am I stuck with an item I can’t use?

You need all 3 I’m afraid, but the others should be available for purchase eventually.

Bummer, but thanks for the answer. I don’t care much about the previous stories, I just don’t want a useless item cluttering my already cluttered inventory.

I do love this new art. Even in the smaller images, the details are still very clear.

The story itself is interesting. My lady is facing some tough decisions throughout and it’s enjoyable.

Finished it up, sided with the Seamstress because of my affinity and preference for pets and companions.
Not sure if this has any far-reaching effects on any aspects of everyday Fallen London life, but we’ll see.

It was… very unusual.

I am stuck for choice, while leaving the Envoy. It seems silly to tell her the relics belong to anyone but the Khaganate, no matter what you yourself believe. I mean, it would be rude and dangerous. But I am worried that answering diplomatically will get me stuck down the road.
edited by Jolanda Swan on 5/25/2017

Overall, this was a very good/even great Exceptional Story. The mechanics for advancing didn’t feel as though they were grindy even if they were, the writing made explicit some of the connections between different parts of the lore for players who hadn’t made/hadn’t found out the connections on their own, there was more than a binary choice between the two characters at the end (and more than a few choices in general), and the lore was refreshing. I chose the Seamstress ending, so I would love it if anyone could link me the endings to the other choices: you can read the Seamstress ending on my profile as well.

1. I’m not knocking the end choices because I thought they gave a good range of choices, but there’s no option for my character to keep the crates for himself! How do you expect to advance through the ranks of the Observatory cult if you have to hand over valuable information to other cultists?
2. Why is the Seamstress not a companion yet pro-active spider-cultist hell yes it could be a beautiful friendship raiding dig sites and hatching councils and plotting to darken the skies with spiders together.
edited by Hotshot Blackburn on 5/25/2017

Oof I’m now to make a decision between who to fight off for the artifacts and these ES choices keep getting harder. On one hand they’re Khanate artifacts so they belong to the Khanate, though seems they want to bury this subversive history. On another hand they are from the Seamstress’s cult, she has a justified claim too. On the third hand I’m allied with the Dilmun Club and his Amused Lordship. Ach.

I’m nearing the end of my story with archeologial hunters, but I’m uncertain with the choices ahead. Putting aside the gray morality of the situation and the unclear motives of each party, I’m currently wrestling with whether or not to employ underhanded schemes alongside my honourable preparations when readying for a fight. What are the outcomes of these differing methods and how do they affect the story?