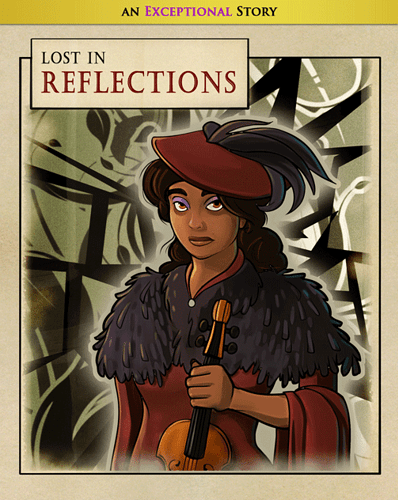 [color=#0066ff]Dark birds. Hungry mirrors. The death of an Emperor. A revolutionary who’d sell her future for one last day of sunlight.

What waits in Parabola? What will you surrender? And who will you save?

In addition to a new, substantial, stand-alone story every month, Exceptional Friends enjoy:[/color]
[color=#0066ff][ul][li]Access to the House of Chimes: an exclusive private member’s club on the Stolen River, packed with content![/li][li]An expanded opportunity deck: of ten cards instead of six![/li][li]A second candle: Twice the actions! 40 at once![/li][/ul]
(To retain this story for playing at a later date, you must play through the related storylet in the House of Chimes. This will save it from the monthly changeover.)
[/color]
edited by h4nchan on 7/1/2015
edited by h4nchan on 7/1/2015

I forgot today was July 1, so I don’t have a lot of actions banked, but I’ve started echoing here.

Those with Notable stats, beware: there is mandatory stat-loss. RIP.

edit: I am really loving it so far (and a pile of new art, too!), but ouch. that hurt. I guess I should have expected it, given the location, though.
edited by cheshster on 7/1/2015

never has a story choice had me more conflicted. Well done Failbetter! top quality content. now please, please, PLEASE give me the ability to exchange Fate to redo this story. I regret my decisions terribly and am willing to pay to correct them! :)

never has a story choice had me more conflicted. Well done Failbetter! top quality content. now please, please, PLEASE give me the ability to exchange Fate to redo this story. I regret my decisions terribly and am willing to pay to correct them! :)

[color=#0066ff]The plan is to make Exceptional Stories available after three months, for a fate cost. You may yet be able to make amends![/color]

That was fantastic. By far the best Exceptional story so far.

Good heavens. That was really marvellous. I think I did the right thing in the end… I’d adore to know what happens if one sides with July’s erstwhile colleague.

A very gripping narrative, and an incredibly interesting idea. I was however a little disappointed that my profession as a Glassman had no impact. It seemed like the ideal location for it as well. An option to work directly with the natives of the strange place you find yourself trapped would also have been very interesting, and no doubt in character for some of us with less than savory connections or destinies.

Well, this is interesting at the very start: the first choice is a Ruthless/Magnanimous tradeoff, but you don’t LOSE any if your quirk is higher than 9 in this case.
Too quirky to be unquirked!

I echoed my last decision and a few others.

What I learnt: Fingerkings finger-lickin’ suck at their jobs forever, February are forever ~Fabulously Unlikable~

A pity we don’t get a new header. It’d add to the oomph and make it feel more like the Mark of Destiny.
edited by Estelle Knoht on 7/1/2015

Loved it! An excellent new piece of content, I got to be truly despicable!

[spoiler] When talking about Paris, they keeping referencing The Emperor.
Does this mean that, due to the Fall of London, Napoléon III either did not lose the Franco-Prussian War or that it was never begun?
And that Prince Imperial Louis Napoléon, never fought and died in the Anglo-Zulu War?

Or is it possible that the Third Republic Fell due to The Great Game’s handling of The Dreyfus Affair, leading to a new Bonapartist regime?

How much has the Fall changed the fate of Surface politics?
edited by Nigel Overstreet on 7/1/2015

Arrgh! I’m faced with a choice of alternatives. One is to do what I’d like to do as a player of Fallen London, for a …unique souvenir. The other is to do what my character would do…

Love the artwork. Just started with my main, and then when he ran out of actions, moved on to my first alt. And clicked blindly in the Hall of Mirrors, because I was running on automatic. So now I’m going to have to get out of the mirror marches. I’d say ‘that’ll teach me’, but it really won’t. Love the story though.

The whole was an excellent progression, and I loved the deeper lore behind dreams and Parabola. I don’t regret any choices I made here, but for all that I may pay fate when the story becomes available, just to be able to experience it again! 6/5, great job!

Has anyone ended the story prematurely yet? I’m quite curious what kind of payoff is given to players who choose to forego the main lure of Exceptional Stories: the STORY. I’m going to guess… it’s not that great? Or maybe it’s slightly more profitable at the expense of story mementos? Fascinating.

Well. As I expected, I did the right thing and did not get a unique item to show for it. I echoed what I did to my Journal: use the cathyr19355 link below.

But it’s a great story, much more gripping than the Court of Cats, with wonderful suggestions of how the world really works…Thanks, Failbetter!
edited by cathyr19355 on 7/1/2015

That was fantastic! I always like meeting new characters and July was very interesting. Her portrayal makes me feel terrible about my last choice, as I should. The intertwining of personal and over-the-top stakes really is something that Failbetter excels at.

There’s mention of a Third Empire, so I assumed Napoléon III still lost the war and the Third Republic did exist, however briefly. I like the Dreyfus Affair theory. &quotNapoléon IV&quot surviving and taking back the throne is certainly the most straightforward explanation as to the Emperor’s identity but I’d enjoy further speculations from people more knowledgeable about this stuff than myself.
It’s tragic, really. The Third Republic is, to this date, our longest and most stable form of government and now a bunch of Brittons have taken that away in their alternate history! shakes fist Perfide Albion etc.

[quote=Calembredaine]There’s mention of a Third Empire, so I assumed Napoléon III still lost the war and the Third Republic did exist, however briefly. I like the Dreyfus Affair theory. &quotNapoléon IV&quot surviving and taking back the throne is certainly the most straightforward explanation as to the Emperor’s identity but I’d enjoy further speculations from people more knowledgeable about this stuff than myself.
It’s tragic, really. The Third Republic is, to this date, our longest and most stable form of government and now a bunch of Britons have taken that away in their alternate history! shakes fist Perfide Albion etc.[/quote]

It could also, theoretically, be either Victor Napoléon or his more popular brother Louis of Russia, though the former did not have any children until well after the 1908 date and the latter never married.
But if history has been turned topsy turvy, then it is possible it’s either one of them. But I’m guessing that it’s Napoléon IV.

This might mean that Napoléon IV attended study at The University, as his real life counterpart went to study in King’s College in London and was a minor character in the Royal Court. This would explain why he’s not dead. He would not have been sent off to the Anglo-Zulu War for the Surface Empire if he only gained his commision in London and Fallen London wasn’t fool enough to start a War on the Carnelian Coast.

This raises another wrinkle because Napoléon IV was supposed to be engaged to Princess Beatrice who, until recently, is not the most comely or technically human of paramours. Perhaps there was a flirtation with the Captivating Princess? Perhaps one’s actions in The Gift could cause them to reignite their affair?

But if Napoléon IV spent any time in the Neath, perhaps that is the reason that Fallen London/Bazaar interlopers changed the events of the Dreyfus Affair, set to begin next year, to allow Napoléon to take the throne?
That might explain why he is so ready to take the Master’s offer?
edited by Nigel Overstreet on 7/1/2015

Re: all the surface politics…

I assume M. Mourvèdre is a certain libationary individual of our acquaintance. Do they take turns making these offers? I would have been more likely to Mondragón at M. Oisanite, since Mourvèdre’s always seemed relatively jolly.