July Excpt Story: We Absolutely Meant to Go to Zee

[color=#e53e00]Exceptional Story for July: We Absolutely Meant to Go to Zee 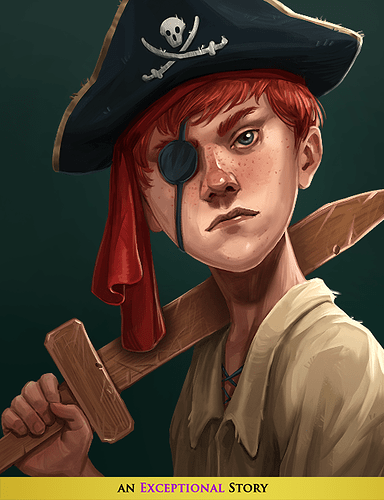 A nautical upset leaves you adrift with three spirited children in an unzeeworthy boat. Explore forgotten islets. Visit the pirate haven of Gaider’s Mourn. And for goodness’ sake, get them home in time for tea.

You no longer need to log in to claim your Exceptional Stories! If you have an active subscription when one is available, you’ll receive it automatically. [/color]
edited by babelfishwars on 6/24/2021

The cards when you first get to Zee keep mentioning a Drownie doing things, even though no such character has been introduced in the story yet. Seems like a pretty serious bug, because I don’t think I simply missed her introduction…

Please send a message if you find any interesting item and/or quality requirements!
Thank you!

The cards when you first get to Zee keep mentioning a Drownie doing things, even though no such character has been introduced in the story yet. Seems like a pretty serious bug, because I don’t think I simply missed her introduction…

Yeah - caught that. Fixed the cause, but need to find out who is impacted so I can fix that. If it’s you, please send in a ticket: support@failbettergames.com

Oh my God! A Swallows and Amazons reference! I love you!

Oh my God! A Swallows and Amazons reference! I love you!

I normally put off each EF for a week or two to let the bugs get shaked out - but when I saw this month’s title I knew I wouldn’t be able to resist!

At first I thought the ES intro was part of Zeefarer! But a double dose of Zee is nice.

The children commented on my clay arm. I did play that story, but I didn’t keep the clay arm. Seems like a bug.

Haven’t finished it, but I’m of two minds about the copious acknowledgement of the items in my inventory. Apparently when I went down to check on these children, I took my Jillyfreur coat, my pirate hat, a sword (?), a goldfish in my pocket, and a seven-throated warbler. My character is eccentric, but maybe not that much? Still neat.
edited by NotaWalrus on 6/24/2021

[quote=NotaWalrus]The children commented on my clay arm. I did play that story, but I didn’t keep the clay arm. Seems like a bug.

Haven’t finished it, but I’m of two minds about the copious acknowledgement of the items in my inventory. Apparently when I went down to check on these children, I took my Jillyfreur coat, my pirate hat, a sword (?), a goldfish in my pocket, and a seven-throated warbler. My character is eccentric, but maybe not that much? Still neat.
edited by NotaWalrus on 6/24/2021[/quote]

NotAWaluus - the clay arm things seems like a (minor) bug. Could you chuck a support ticket in, when you get a chance? Flag it for Olivia :) Thanks!

This story is seriously excellent!

I came her, however, to lodge a formal complaint against a certaint loose end, that I really hoped to tie at the end of the story, but, alas, found was no such option.

I’m speaking, of course, about the captain of whatever ship I hired, who left me for death on the middle of a small island in the Unterzee and probably didn’t even return my payment, to boot. I now feel the express need to close that gestalt by sending assassins after him, writing Correspondence on his ship until it bursts into flames and/or enacting upon him some particulary vile Discordant Law, like the one that says &quotNo empty orifice shall remain empty&quot. Can we maybe get a post-Epilogue where we can do just that? Pretty please?
edited by Sagrim-Ur on 6/25/2021

I am totally changing my dude’s name to Captain Blood Storm now, because that’s absolutely better than the halfassed one I came up with in a panic upon first discovering this game and frantically naming him after literally the first thing I saw i.e. the FL toothed hat logo.

Also 100%, no regrets about keeping the family together and encouraging the children to become pirates. The worst thing that can happen to you at sea is to lose your mind, eat your crew and be sacrificed to a zee-god. The worst things that can happen to you in LONDON include THE NEXT CITY FALLING ON YOUR HEAD if the deal goes south. And it has much, MUCH cleverer predators like the Captivating Princess, the agents of the Great Game, the Devils and would’ve still had Mr. Veils if it wasn’t for me. Plus, working a respectable job prepares you for absolutely NOTHING to deal with ANY of that. At least you can just harpoon a zee-beast and be done with it, and piracy teaches you lots of valuable skills like selling all your bargain sale goods at one port at another port, and compiling tons of port reports to tilt the balance of power from the Khanate to the Iron Republic which can potentially tilt the balance of power across the whole Neath. What really cinched my decision was the game hinting at the children possibly joining the NAVY which I contend is the most incompetent organisation in the game. And yes, I am including the Topsy King’s court.

…I wonder if I’ve made a future ally once the ES’ port becomes unlocked?

Just finished it. It was quite enjoyable, though I had a hard time with the willing suspension of disbelief in some parts of it. That captain at the beginning just leaving me for dead and it never been acknowledged again comes to mind. I am quite cross with that guy, especially since I chose the &quotromantic date&quot option at the very start so presumably my Boneless Consort was still aboard and quite worried about me. Also, why would I even charter a ship for a romantic evening? I have a yacht! I understand it’s just a silly framing device, but it was still somewhat jarring.

The overall whimsical tone of the story also didn’t quite jive with the actual events, which are quite dark and harrowing. My character kinda took it in stride that he was stranded with three lost children in the middle of the zee in a too-small ship with little food. Maybe I’ve just played too much Sunless Sea, but that sounds like a complete nightmare scenario.

Lastly, it always felt way too irresponsible when I had to just leave the children alone with the weird drownie in the middle of the pirate den. I feel like my character would have asked the Pirate Poet to look after them for a bit (I’ve taken it as headcanon for what happened). I get that it would be more irresponsible to take them with me while I go looking for a Blue Prophet egg, but still felt out of character to just leave them out of my supervision like that.
edited by NotaWalrus on 6/25/2021

I should rather like to see the middle lad, &quotCat&quot, be available as a lab assistant or even just kicking around the Bone Market.

I was hoping this story unlocked Gaider’s Mourn as a location for Zeefaring. Alas the Corsair’s Forest is still not selectable on the Zailing map, after finishing the story.

The mechanics of this ES were first-rate. They helped greatly with one’s immersion in the story, and they felt natural and easy to use.

I was less enchanted with the actual story. The children and other characters you met were convincing enough, but I agree with NotaWalrus’s point that the captain’s abandonment of the player character with three stranger children in a tiny boat deserves some kind of closure, particularly for players who chose the &quotromantic&quot option as their reason for being at Zee in the first place.

In addition, the plot seemed pretty predictable once the story got going. I could see the plot twist that the children’s mother was still alive as a Drownie coming from a mile away, though I thought that the family’s choices were well presented.
edited by Catherine Raymond on 6/27/2021

Well I thought it was entirely delightful. Loved it from start to finish. The bit with the treacherous captain didn’t bother me in the slightest. I was more curious about why the hell I was using somebody else’s ship in the first place.

I’d echo the desire that Gaider’s Mourn become a regular destination. I’d love to go back there. Would be a nice little Easter egg if you could have a tiny storylet there where you meet up with the reunited family too (for those whose story went that way).

Anyway, good job. I usually post on these threads simply to complain about things that irked me. When I like a story I usually don’t post anything. Just this once, I’m not doing it like that.

I did everything I thought I needed to get the pirate ending (didn’t look up spoilers, just intuited the twists) but the kids split up in the end. I should have dispelled the illusion - if there had been any indication that this was more than a “LOOK YOUR MOM IS SCARY NOW” option, or that there would be more input to give, I would’ve. Actually pissed off about this one…and split on whether I want to pay to reset, out not give money because it feels like rewarding the wrong kind of “choose your own adventure” kind of writing, with poor/misleading signposting.

Excited about the Pirate Poet, I found the story quite pleasing.

I’m also guessing this is the ‘rough draft’ for the eventual Zee location, which is a fun treat to see early, if true.

I wonder if we’ll see more of the Feast/other companions scattered around in the future.