I’m probably just missing this through a gross oversight and massive incompetence, but I’m unsure about the inventory limits on companions, weapons, the like. Is it limited to ten total or do additional rows appear once they are needed?

Much thanks for helping me discover this any way but the hard way, 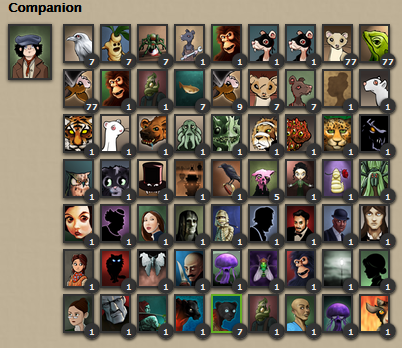 Thy name is Legion.

[quote=Gonen][quote=NiteBrite]
They appear like this for example:
[/quote]
You have… EVERYTHING![/quote]
Well close to it, but no there are a few things I am missing. Some I am locked out of because they are mutually exclusive, others like the goats I once had but used to craft the heptagoat. My next goal after my wines grind is to get the remaining goats back.

Not everything, but nothing that can’t be obtained pretty easily.
Except some of the crazy stuff like the Gilded Crustacean or Rubbery Investigator.

No Hound of Heaven, I see!

I’ve got the components to make a hound, I just haven’t done it yet, but good call I’ll need to make one again one day. I’m also missing all the Redemption companions such as the grubby urchin and the alluring accomplice etc. Rebuilding after a fire-sale takes time after all, but I’m getting there. My rarest companion is the Rubbery Conspirator, which is the upgraded Rubbery Accomplice meaning I am unlikely to get the accomplice. The gilded crustacean is the one I regret missing out on the most. I was there for the sunlight, but I didn’t have a dark carapaced crustacean at the time. I failed like 9 pails of attempts to make one the previous sacksmas in a run of rotten RNG luck. I feel totally robbed on that one haha, ah well.

I’m surprised you don’t have the Saker-Falcon or whatever it’s called. I thought you were around at the time of The Silver Tree?

You also seem to be missing 5 of the 6 raven advisors, unless I completely fail to notice them.

I can only see the Devious one (missing: Dreamy, Philosophical, Mystic, Wary, Unscrupulous).

From the painted cat, down 2, to the shiny fly? What’s that?

That’s the Shimmering Songster. You can get it around the Feast of the Exceptional Rose if you have a Rose-Bearing Maggot and a Hamper of Heart-Cuts

Keeping On-topic to the off-topic, I just got my first Ubergoat! How do I make a Heptagoat?

Keeping On-topic to the off-topic, I just got my first Ubergoat! How do I make a Heptagoat?

Holy jumping jebus! Okay, I’m changing my current goal if that’s the case. No way would I hope to reach that. Ever. Picks up his baby Ubergoat and goes home sulking

I believe the production of the Heptagoat also costs 1 fate and occurs in the Iron Republic with a hidden action on the Overgoat card suggesting going there.

It was 1 fate on the Ubergoat creation too.

Is there a thread on end-game goals in the difficulty region of Ubergoats? Heptagoat and Cider are both too ridonkulous for me, I fear.

Here you can find a list of possible goals provided by Nigel Overstreet. I personally would suggest getting your three Newspaper qualities up to 10 since that’s about equivalent to an Overgoat if I recall correctly. I know that Gloria still has over 19k Journals of Infamy even after selling some and using others to reach Scholar of the Correspondence 21 from 10.

Where did you get that many Journals? Are they provided by a successful newspaper edition? I should really actually do a print run whoops