As you may have heard, Alexis Kennedy, the Grand Tiger-Overlord and Menacer of Many, is leaving Failbetter Games to find new and exciting ways to menace people. I think? Something like that. Anyway, his last day is approximately the 16th of June (ED: actually the 15th), and it would be very sad if we were’t able to send him rats before then, because it’s a time-honored tradition. You can tell it’s time-honored because we’ve been unable to do it longer than we have been.
Take a look at this image, and see if you can detect something of note.

A band of operatives, who could possibly have surrendered much, maybe, have managed to whisk away the Accepting No Further Rats quality from Alexis Prime. This, comrades, is your Chance; your final opportunity to burden the Tiger Keeper with as many rats as you possibly can before he slips off into the foggy unknown.
Check out this screenshot from the very first Ratmas. It was a simpler time, then. Freer. We were free to send rats to anyone, be they god or man.

You can’t actually send Alexis Rats of Glory, because he has one already (or had, at least), but I’m going to post a picture of one here anyway because it’s hardly a good post if I don’t include a picture of a Rat of Glory. So sue me.

Align your Ratsending cannons in this general direction.
Legends tell of another Alexis, created for other purposes. A test, if you will. Its existence and location is often uncertain, but if you can pin it down, there are rats to be sent. Good fortune.
There’s also some guy called AK5. That’s just some random passerby. Don’t send rats that way.

I won’t bother with the same advertisement and self-promotion and promulgation of known active Failbetter agents as I did last year during True Ratmas; if you’re feeling particularly festive and want to spread the cheer, though, you can find a current-at-the-time list of FBG accounts in 2015’s Ratmas post.

How do I get rats?
Shoot them in Watchmaker’s Hill if you’re really buff or really weak, or steal them in Spite using Unfinished Business.

How do I send rats?
Use the Give a Gift opportunity card, which you can forcedraw in your Lodgings for 1 Fate or just pull from your Opportunity Deck, to send 100 rats. Seekers of the Name may also take advantage of the Knave of Regrets card, unlocked with Unaccountably Peckish 8, to send 1000 rats at the cost of gaining menaces and Reputation: Abomination. I mean, only 100 rats actually make it to their destination, but it’s the thought that counts!!!

can i say ‘ratckoning’ or is that prohibited

Wait, but isn’t Ratmas in December?

It used to be, but it’s been ratconned.

can i say ‘ratckoning’ or is that prohibited

All I had was mice. They were big mice, though.

I SHALL SEND RATS

And look at who flipped the Give a Gift after weeks of not getting it! o/

[quote=Professor Sketch]Looking at Alexis’ first post on the forums, I’ve learned that he doesn’t like Batman. This makes him the Ratman, a title that is very misleading considering he is a tiger.[/quote]We have an italian comic called Ratman! It’s a really funny parody of Batman/superheroes in general.
Sadly untranslated. 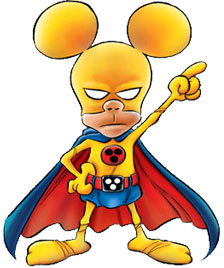 Looking at Alexis’ first post on the forums, I’ve learned that he doesn’t like Batman. This makes him the Ratman, a title that is very misleading considering he is a tiger. 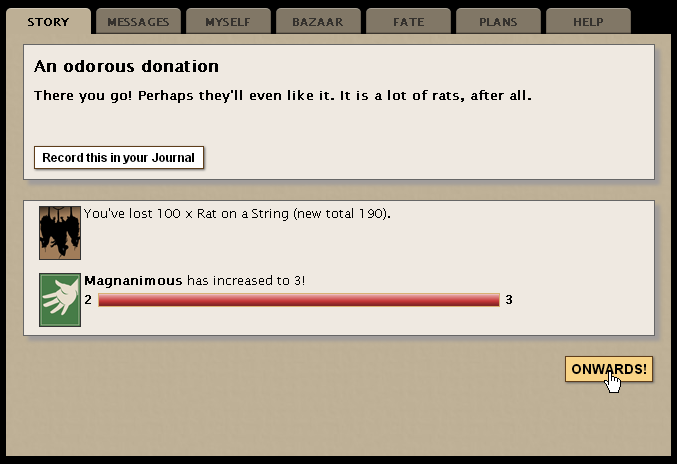 It seems I have run out of Fate, but here’s still a hundred more.

I am fully willing to take some Reputation (Ratputation?): Abomination in order to maximize my murine output on this momentous celebRATion.

Let this be the event our geneRATion shall tell of in poems and song!

There, my humble donation to the cause. Enjoy your very own Ratpocalypse, Alexis!