[color=#cc0099]Delicious friends, a full year has passed: Election begins today! Feducci is through and a new mayor will be chosen! We cordially invite you to Fallen London’s third official Election.

“A hustings stands in Hastings Square, festooned with bright banners and garish posters. Some depict the amiable grin of Mr Slowcake, others the crowned head of the Captivating Princess, others still the white smile of the Jovial Contrarian.” 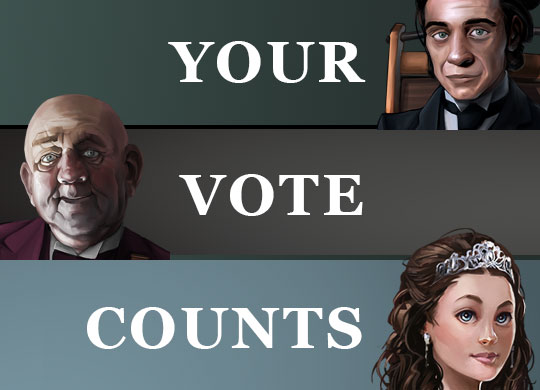 The Election is free and is open to all players. It will begin today, Monday 18th June and end on the 2nd of July. Mr Huffam will be polling people throughout Election and releasing the results periodically via the main Election card.

CHOOSE A CAREER & INCREASE YOUR REPUTATION
Whether Campaigner, Fixer or Agitator, your efforts will be required. Advance your Career from the main Election card. At the end of the Election, your combined Election Career level and Notability will be counted towards whichever candidate you chose to support!

And as this is politics, the strength of your Reputation is everything. Gain Reputation through the Further your Reputation card in your Opportunity Deck. Reputation can be spent to advance your Career, gather information on the three candidates, and to acquire useful items.

Calling in Favours can also increase your Reputation, and each Career type can call on different factions:

CHOOSE YOUR CANDIDATE
Use the first week of Election to find out about the candidates and their platforms via The Mayoral Election 1896 storylet. This year’s brave contenders are: Mr Slowcake, The Jovial Contrarian, and The Captivating Princess.

At the start of the second week, Monday the 25th of June, you’ll be able able cast your vote! We look forward to seeing who wins your loyalty.

THE OUTCOME
On the 2nd of July, Mr Huffam will announce which candidate has been successful!

The elected Mayor will reign for one year, after which another election will be held. The winning candidate will have a Mayoral influence in your Opportunity Deck until next year’s election, so be certain to investigate all their platforms vigorously.[/color]
edited by Absintheuse on 6/18/2018

Mr Slowcake’s Amanuensis which was the most wanted person and refused to appear when needed.
The Contrarian who doesn’t need any other introduction.
And a junkie Princess.

so how do I go about actually choosing a career or candidate? the options aren’t there in the storylette

Will there be posters again this year?

so how do I go about actually choosing a career or candidate? the options aren’t there in the storylette

[color=#cc0099]If you played last year you’ll need to remove your previous career first which is an option under the The Mayoral Election 1896 storylet. If you still can’t after that, please write in to us at support@failbettergames.com and we’ll investigate, thank you![/color]

So our choices are a sockpuppet of hell, a literal monster, and the Contrarian.

So Slowcake’s claiming the meritocrat position, the Contrarian’s running for conservative law-and-order ideals, and the Princess… just wants to funnel public funds into her parties? This will be an odd election.

Will there be posters again this year?

[color=#cc0099]We’ve decided not to do posters this year due to some time constraints on our team at present and a few other business considerations.[/color]

Will there be ‘free’ Fate-locked items, as per previous years?

Will there be ‘free’ Fate-locked items, as per previous years?

[color=#cc0099]There will indeed, but these won’t appear until the second week[/color]

Evil, eviler and chaos?
Ouch.
Don’t get me wrong, I assume this is going to be fun still, but I was really hoping for a candidate I could support like we had in the previous elections. I honestly cannot see myself supporting any of these guys or what they stand for.
Unless they were deliberately chosen so as not to ignite the fires of the previous years, of course.

I don’t know but the Contrarian will bring caos to London. I want that. His promise to bring orden is just a lie to win…

Oh man, I have so much beef with those portraits! With all due respect to the artist, whose skill is undeniable, they look just plain bad when we take into account the characters they’re supposed to portray.

Every single character looks terribly off-model, and in some cases (like the Princess) the new appearance goes against everything that was previously established.

The Princess looked like an elegant woman in her mid-twenties, with brown hair that gleamed red (a trick of the light? or red honey?). She had a distinctly eerie feeling about her. Now? She looks like a teenager, with her hair and eye colour dramatically changed.

Slowcake’s Amanuensis also looks vastly different - but I suppose I can understand that, given he didn’t have an unique portrait before.

But the Contrarian - much like the Princess - did, thanks to the previous election he appeared in. And his facial features have changed a lot - notably his slim nose and hairline.

I understand the need to update art, but must we really throw consistency under the bus (or, in this case, carriage) while doing so? Last election, the Implacable Detective got an absolutely lovely new portrait that kept everything that made herself, well… her. Why not this time?

Regarding the poll question: “Which candidate would you most like to go for a drunk down the Medusa’s Head with?”; I don’t see how anyone could not pick the Contrarian.

Unless they were deliberately chosen so as not to ignite the fires of the previous years, of course.

[li]
Just so. The moral high ground for this year’s suite of candidates is defined not so much by the height of peaks as by the depth of troughs.

Honestly, I’m bummed we don’t have social actions anymore this year but notability, a mechanic that only benefits late game players, is here to stay. (Or perhaps mid-late game, but we all know notability is even more annoying when you just recently became a PoSI and barely have BDR gears.)

I think they were trying to avoid landslide candidates but… I think I will finish my run in The Court of the Wakeful Eye instead of rushing back to London to participate in the Election. Not that I am not looking forward to playing, but none of these guys makes me want to support them.

[quote=millea]
Slowcake’s Amanuensis also looks vastly different - but I suppose I can understand that, given he didn’t have an unique portrait before.

But the Contrarian - much like the Princess - did, thanks to the previous election he appeared in. And his facial features have changed a lot - notably his slim nose and hairline.[/quote]

Wait, I’m confused - if reputation is now gained through opportunity cards that are mostly the same for all careers, what’s the point of being Campaigner, Fixer, or Agitator? Are they still used to discover various secrets?

[quote=Kaijyuu]So our choices are a sockpuppet of hell, a literal monster, and the Contrarian.

Well, guess I’ll be Contrary this time.[/quote]
Basically. I never thought I’d be backing the Jovial Contrarian, but here we are.