I recall having this issue a few times about a year ago, after which Failbetter did some switching of server management iirc.

Started out really laggy. Then error 503.

503 seems to be the order of the day. Adding my voice to the chorus.

It seems I too am joining the ranks of the League of the Inconstant Connection. Heh, at first I thought it to be an odd quirk of my purchase of Exceptional Friendship.

Yep, I have error 503 problems as well. Hopefully they get fixed soon.

Just think, what we feel now is how the surface felt after the Fall. One second London is there, the next second it’s mysteriously gone.

I’m having problems, too. Why did it have to happen during my break at work? Now, I’ll have to waste 18 actions…

Why’d it have to happen when I need every action I can for grinding C: Rubbery Men D: 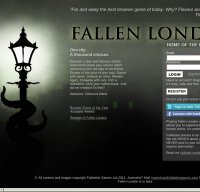 Fallenlondon.com Down or Just Me ?

Fallen London down? Check whether Fallenlondon.com server is down right now or having outage problems for everyone or just for you.

Huh, when it loads the timers are frozen.

I either get service error or load a relatively blank page (The framework for fallen London is in place, but none of the tabs or storylets ever load)

It’s working for me now and something looks different. Did they change the UI? It looks cleaner.

Still having issues here. Same as everyone else: page won’t load (goes to a 503 error), or it loads halfway, or the timers don’t move, or clicking does nothing.

It briefly fully loaded for me, but after getting a “Regrettably, only Exceptional Friends may enter Veilgarden.” error its now only partially loading.

It’s down here, too, for me and for my friend Flying Lizard.

At me, it doesn’t want to load at all[li]

This has been a very long downtime.

Well, it’s 4 am in London, so hopefully someone will be up and kicking the server in a few hours.

It’s those damn monkeys! The Emperor’s Wrath has been delivered to London!