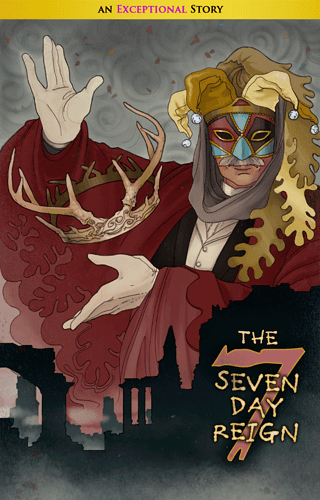 [color=#0066ff](To retain this story for playing at a later date, you must play through the related storylet inside the House of Chimes. This will save it from the monthly changeover.)[/color]

Can someone tell me if entering the king’s gallary ends the story?

Can someone tell me if entering the king’s gallary ends the story?

I enjoyed it! I especially liked how the All Shall Be Well choice is used; much more perilous and thrilling compared to the one in Flint. The Family Ties theme is very much front-and-center, and the Stags get pretty chilling in contrast. (Not sure how well it works if you have the generic protege in place instead.) There’s a bunch of old faces resurfacing, too, but I am surprised that of all things it refers to, Cut with Moonlight is not one of them.

On the flip side, it’s perhaps a bit too luck-dependent towards the end, and it is both abrupt and I was hoping for a bigger follow-up to it. You get to learn about the Stags, but you aren’t quite allowed to react to it, strangely, compared to the other stories. (I got really lucky and ended with 6 Head Start despite having a balanced set of reigns.)

If you’re a completist, there was one option in the Spite-Veilgarden-Watchmaker’s Hill set that I wasn’t able to complete – I suppose it might unlock after I do something else, of course – but prioritize among them just to be safe.

Out of my own curiousity, is there any difference in the story if you are a member of the young stags yourself?

I have seen that one of the options in the first storylet requires Inconvenienced by Your Aunt > 10. I was planning on purchasing the extended &quotAunt&quot-storyline soon and now I’m wondering if it’s worth to play the Aunt storyline first for that one option?

I suspect it’s just a minor detail and doesn’t really matter but could someone please confirm/deny?

Judging from the art alone, I’m waiting for the Game of Thrones jokes to begin—which I’ve probably just rendered unfunny, so you may as well not bother unless they’re really good.

Out of my own curiousity, is there any difference in the story if you are a member of the young stags yourself?

No difference, but it does unlock a new option that gives some small backstory.

The story in Veilgarden appeared and completed okay, but there is no sign of anything in Spite or Watchmaker’s Hill – are those parts card-based?

The story in Veilgarden appeared and completed okay, but there is no sign of anything in Spite or Watchmaker’s Hill – are those parts card-based?

Go back to Ladybones and do some more ruling! Spite and Watchmaker’s Hill reopen as the week progresses.

I haven’t started this story myself yet, but I just wanted to note that with this month’s story we’ve now completed a year of Exceptional Stories - which started at May 2015 with the Haunting at the Marsh-House, and includes 11 stories (Flint taking 2 months).

Many thanks to FBG for all the unique content and experiences.
Here’s to another year of stories!
(raises a cup of Cider)

p.s.
I would love to hear sometime from FBG’s perspective how the whole Exceptional Friends and Exceptional Stories approach have worked out for them, and whether it has met their goals of more predictable revenue stream.

I’ve only just started and I’m already nervous about what the consequences might be for my daughter. Which is a fabulous bit of writing to sneak a drop of menace into such a nominally innocuous group.

Chuffy is such a petty and spiteful creature. I’m quite worried about how my Aunt shall do in the company of the Young Stags now that she won their blasted lottery.

Absimiliard pauses in thought for the briefest of moments

Then again, perhaps it is them I should feel pity for, this is my “Aunt” after all…

I debated long and hard over whether or not to tip over the Cauldren, or sneak off to try and offer better support. Then I went “Screw it, she’s my adopted daughter” and tipped the lot. Worth it.

There’s something quite delightful about the little thrill I get every time I see the “Will all be well?” choice. I definitely enjoy the added risk element, that’s for sure.

I must admit, while I took All Shall Be Well, I AM curious what would occur if you picked the risker option and failed…

Would your Daughter/Aunt really be eaten? Would you lose that massive gain from Refreh Actions? Can I kill each and every last Stag for doing it?

I picked my Aunt at the opening storylet, but my daughter to win the lottery; my daughter was properly named in FL proper (e.g. &quotYou watch your Daughter stand&quot), but my Aunt is appearing in the echoes. (and then in some places it’s my protege, who I never picked!)
edited by an_ocelot on 3/31/2016

I must admit, while I took All Shall Be Well, I AM curious what would occur if you picked the risker option and failed…

Yes, it is in the instruction that this is a permanent loss, whether you betray them or failed. No, I didn’t pick that, because why would you? It doesn’t seem like the Flint kind of risk where you can just get another either.

Ocelot: For the majority of the story, the identity of the Sovereign is handled like Addressed As. In fact, some of the echoes will have &quotPossessive&quot and &quot0&quot instead, so it is pretty much a gendertitle thing, save for a few character-specific storylet for the daughter and aunt.
edited by Estelle Knoht on 3/31/2016