[color=#ff9900][quote=Appolonia]Honestly, my favorite part of the Moon League is that it is an 8-part scene with another player, in which you can logically move through four sets of dialogue each. Why can’t we have that on a social action? I.e., mimic the party card, but have a little social action that’s &quotInvite someone to attend a party with you.&quot Then you each get a &quotConversation while arriving&quot. Then &quotConversation at dinner&quot. Then &quotConversation while dancing.&quot Then &quotFarewells are said&quot. Each time a move and counter-move, with the chance to send more dialogue. That would be so great.[/quote]
We’ve been discussing social actions recently, and this is the sort of thing we’d like to do more of![/color]

It just now occurred to me how much sense it makes to put K&C on hiatus with the launch of the iOS app.

As the only PvP part of the game it makes sense to treat this aspect of the game carefully when expecting lots of new players who know little of the game and what to expect. (and obviously new players are at a huge disadvantage in K&C, especially since the Iron League is the default).

Oh you trolls, you left the chrysalis candle storylet so people still have to deal with a storylet everywhere they go if they want the candle in their collection.

So what do you mean by those who had access to the Listing Tower? Do you mean those with the key or with Dangerous 100, A Participant 1, and a win-streak of three? Because the latter method seems rather silly to me, looking the card for who knows how long to those with an unlucky loss at the end while leaving it open for people who may not even have the key or be able to purchase it.[li]

The Chrysalis Candle storylet is closed now, by the way.
edited by Optimatum on 4/18/2016

Oh you trolls, you left the chrysalis candle storylet so people still have to deal with a storylet everywhere they go if they want the candle in their collection.

Do you have Labyrinth Runner?[/quote]

Eh? Bronze League? What’s that? I can… I can barely remember when K&C first opened, and I think my insides are too dusty [rewraps a bandage] to remember how it worked. There were no forms. There was a lot of stabbing. So much stabbing. I became an umpire, and got stabbed some more.

Labyrinth Runner… I don’t recall Labyrinth Runner having anything to do with K&C. You got more Labyrinth Runner by finding shortcuts that let you move between areas without spending an action. (It used to cost actions to travel…) As far as I know, I have all the Shortcuts, though they don’t do anything now: 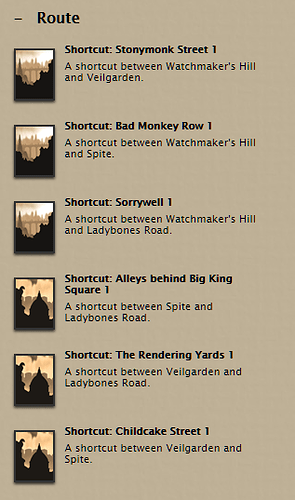 317×537 67.1 KB
…and I only have Labyrinth Runner 11 because I discovered that some of the shortcut-unlocking storylets could be repeated, so I decided to grind it higher than necessary for fun. FALLEN LONDON!

Anyway, tangent, nothing to do with K&C. Do they still send Knot-Names these days? Why, I remember when I was a lass, the Brass Embassy was called the Bronze Embassy, and Rubbery Men only had one tentacle. You had to pay to walk from Spite to Ladybones Road and the urchins were all still in diapers. Then the Starveling cat showed up and–

Note the bronze leagues weren’t part of ~original~ knife and candle, but they were part of the first season of the Underground leagues of knife and candle, which came later. The bronze leagues were exactly the same as the iron leagues, except you won/lost two tokens instead of one. It was played with the same cards and had the same attack text. It was closed down due to a glitch wherein if you had 1 token and therefore did not have two to lose, you kept that one token and could effectively prevent yourself from being knocked out of K&C by having an odd number of iron knife tokens. I believe the baroque gain/losses were +2 on a loss and -1 on a victory. It wasnt too exciting, other than exploiting that glitch was a good way to min/max baroque by intentionally losing duels against invincible opponents, such as Mr Iron. And it was an effective way to ensure you wouldn’t lose all of your K&C items by getting knocked out of the leagues as was the custom back then. The iron and bronze leagues would sometimes bleed into each other and cause weird errors. This also happened with the iron league and the moon league in its early days, but I havent heard of that happening in a long time so I assume it eventually got patched. The bronze league had a bronze skull token similar to the silver moon token of the moon league. When the bronze league ended, everyone who was in it at the time received a few prize tokens for their troubles in getting booted from the league. That’s about all there is to know about the bronze league.
edited by NiteBrite on 4/18/2016

Will prize tokens be useful in the new season?

Will our ability to turn in prize tokens be revoked?

[…][color=#ff9900]We’ve been discussing social actions recently, and this is the sort of thing we’d like to do more of![/color]

Oh I hope this means you are discussing revamping them on the engine level. The current system is just so limiting in what it can do compared to what it should do.

I’m just hoping they give us the opportunity to have social actions with multiple people. I know several friends who would love to throw parties for people, you could do a salon.

Myself, I just want to be able to introduce two people to each other. (in a more free-form manner than identically scripted messages to each, followed by a quick in-character departure so they can converse.)

I have a few suggestions for the third season which might spice things up:

Oh, minor item but since its no longer possible to retire from K&C or anything like that, do you think the K&C option on “A Polite Invitation” could be removed? There’s no reason to charge us extra actions for attending the party if we aren’t actively knifing and or candling.

Don’t we get extra Talk of the Town for being K&C players? I thought that was the actual benefit, and the bit about not getting attacked just color-text.

[quote=NiteBrite]Oh, minor item but since its no longer possible to retire from K&C or anything like that, do you think the K&C option on &quotA Polite Invitation&quot could be removed? There’s no reason to charge us extra actions for attending the party if we aren’t actively knifing and or candling.

Can they not? I thought that option gives us a boost when we start the party . . .

I use it all the time, as it helps get to my personal recommendations a lot quicker than otherwise.[/quote]
It doesn’t give enough to be worth 3 actions, IIRC, so i’d rather they removed it, or made the other option unlocked. (Or buffed that option to compete with the general rule of +2 cp per action on non-card actions, but that’d be dreaming.)

I don’t know exactly how much extra Talk of the Town it gives, but I don’t think it’s enough to justify costing two extra actions.

I don’t know exactly how much extra Talk of the Town it gives, but I don’t think it’s enough to justify costing two extra actions.

It gives 3 points rather than 2.

Oh, yeah, that’s not worth it, clearly. I thought it was more.

Oh, I was enjoying a little winning streak! But I am eager to see what changes will be implemented.

I am quite disappointed to find this out after noticing the lack of the K&C option on a card and coming to the forums to seek explanation. I understand that the app release took first priority, but again, could you either announce these changes in-game in the message box, or if that’s so unsuited to these announcements, then update it to something more useful?

I sent in a suggestion about the cards a couple weeks ago and just got a response. They’ve removed the K&C option for the party card, and The Listing Tower can now be drawn with Dangerous 100 as before but now just the Sharp Iron Key instead of A Participant and a winstreak. I haven’t checked to see if the latter card’s rarity has changed.