How about a fun worldbuilding game? If you got the creativity and time to spare, design a symbol, seal or coat of arms for your clique. I’d also really like some help finding good heraldic shields to use as a template, so people have something to build on. Several alternative symbols for each clique is not a problem, if more than one person in a clique wants a go at creating a symbol and if people have done a symbol that they enjoy, I can probably use it in the recruitment thread to make it more visually interesting, how about it?

The idea is neat, though my clique formally beng a poetic society, meeting at the homes of the adherents, it doesn’t really need a symbol like a school of institution would. Anyway, I browsed something that seems fitting:

http://www.ellerbeemonograms.com/PPS_curlz_MT_photo.jpg (I put it as a link because it was quite large and I didn’t want to disrupt reading)

Though, if any of the members of my clique (Crocetta, Elvortel, UnterlandAlyss or Trinity Farquar) have better ideas, I’ll be happy to hear them ^^
edited by streetfelineblue on 2/2/2012

Might sit down later and draw it, but the symbol for my clique would be a book, an open lock and seven candles.

Not displayed openly, of course. It may be called a Gathering of the Unwise, but it doesn’t necessarily mean that unwise. 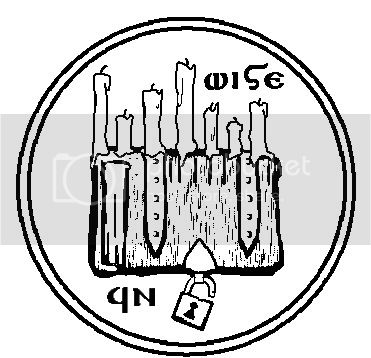 I took the liberty of trying to design something according to your specifications, and this is what I came up with.

Though that does scarper my plans to draw it myself. No matter, I shall do so regardless… eventually. One has to maintain one’s credentials as the laziest artist in the Neath, after all. ;)

Though that does scarper my plans to draw it myself. No matter, I shall do so regardless… eventually. One has to maintain one’s credentials as the laziest artist in the Neath, after all. ;)[/quote]

Well, this was just my own suggestion and take on the idea, I’d really like to see your official version.

good idea. pity i don’t have access to a good/free scanner, so here a scrappy logo/flag for team “and you shall know us by the munching of the dead”

edited by Paya Danceswithporngroove Chin on 5/2/2012