White and Golds, or Blue and Blacks?

Have our captains been wrong all along?

Given the colours of London’s own police uniforms, there’s a Chestertonian metaphor in that…

(Also, having just seen the exact same picture show as completely different colours on two different monitors, I am glaring distrustfully at my computer and wondering what else it’s lying to me about.)

Have you ever considered that while our identification of colours is (more often than not) consistent across persons, our perception of them isn’t necessarily following suit?

Just ask yourself - how do you know if someone else’s brain isn’t interpreting white the way yours interprets black and vies-versa? You’d never know, since you’d both be calling it the same name while “seeing” (or rather perceiving - never call those two words synonymous) them in two different ways.

Maybe, just maybe, you should distrust your EYES? Or even your BRAIN?

At least computer is a well know mechanism.
…
…
…
Or so the specialists CLAIM…

I wonder how that dress looks to tetrachromatic individuals.

(Also, having just seen the exact same picture show as completely different colours on two different monitors, I am glaring distrustfully at my computer and wondering what else it’s lying to me about.)

I’m pretty sure most of it has to do with monitor settings rather than anything fundamentally different about people’s eyes.

[quote=Red-XIII]At least computer is a well know mechanism.
…
…
…
Or so the specialists CLAIM…[/quote]
lol

If they claim that they’re probably not specialists.

[li]I still can’t believe that became such an issue. Color-tricks aren’t really anything new on the internet, are they?[/li]Either way, I find your &quotWhite and Golds&quot spin on it hilarious.
[li]
edited by SouthSea Rutherby on 2/27/2015

I’m pretty sure most of it has to do with monitor settings rather than anything fundamentally different about people’s eyes.

I saw it differently on the same phone. Before and after skiing, so wonder whether the snow had changed my internal white balance?

What’s weird is that my wife and I - as well as several of my 6th grade students and I - saw different colors WHILE LOOKING AT THE SAME PHOTO ON THE SAME SCREEN AT THE SAME TIME!

This is some Echo Bazaar shit, man. They should write the dress into both Sunless Sea and Fallen London.

I am glaring distrustfully at my computer and wondering what else it’s lying to me about.)

Well, if it’s connected to the Internet, pretty much everything.

I wonder how that dress looks to tetrachromatic individuals.

My tetrachromat friend said white and gold.
edited by WormApotheote on 2/27/2015

Thanks for satiating my curiosity! ^^ I personally see gold and a light blue (but only if I’m squinting, otherwise my brain says white).

Even though I’ve now been convinced that it is in fact a blue and black dress in a HORRIBLE picture, I cannot see it as anything but white and gold.

If you’re a blue-and-black who doesn’t understand what the white-and-golds are thinking: we see the image as the dress being in shadow. So, yeah, the literal image’s colors look bluish grey and dark bronze, but our brains subconsciously assume that’s because of shadow, and interpret it as being a dress that’d look white-and-gold if front-lit, like the left side of this: 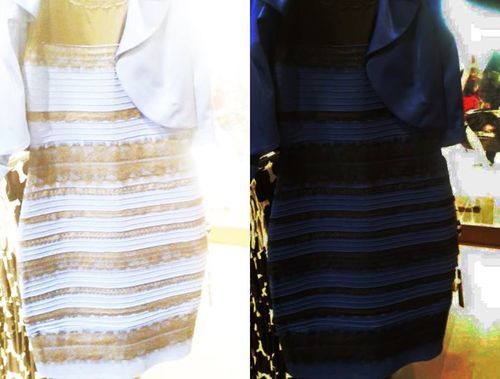 I’m only BARELY capable of processing the darker image as of a blue-and-black dress (it’s not really a voluntary thing), and even then it took a lot of work and i hadn’t managed it until making this post. Still never managed it with the OP[icture]

People who’ve seen more overexposed photos are also probably more likely to see it correctly, since the photo IS apparently super overexposed and washed out, and you’re more used to mentally correcting for it in images you see.

Also, if you start looking at the image from the bottom up, it’s way easier to see it correctly - hence why a lot of people report seeing it white-and-gold, scrolling down and reading comments, scrolling back up, and seeing it as blue-and-black. Something about the top of it is trickier, probably due to it being slightly translucent.

I process the bright image as “Ah, the light, it burns!”, and can’t actually determine the color because the photo is too washed out.