What did you do to my Winston!?

…just kidding! Though I’ll admit the change in art was a bit jarring.

Still, I think the new rat art works better for the Working Rat than it does the Talkative Rattus Faber, whom I’ve always considered more of a naive, pudgy city rat than a hungry L.B. bandit. By the same token, it makes more sense for the Disposed Chief to use the new, lean chief art while the clearly more successful regular Chief uses the heavier build. I know it’s probably your intent to use the new art with the old to differentiate the rats better, but until then, I’ll just have to deal with the fact that my property manager has really let himself go.
edited by Patrick Reding on 3/24/2012

As I mentioned in the art thread… the stylised rats with their scrawny bodies and giant heads don’t quite fit the tone - not while the trend in most other art has been toward realism. They’re fine pictures, in an ugly-cute way, but I thought the old ones gave a better sense of the L.B.s as believable magic creatures!

Agreed, Sir Frederick. The skinny necks do make them look too anthropomorphised, as they are not characteristic of actual rats. Especially since the LBs are meant to be physiologically identical to normal rats save for speech and sapience. But it is easier to buy if the rat is explicitly malnourished. Although now that I think of it, who would treat their rodent friends so badly that they would become malnourished?
edited by Patrick Reding on 3/24/2012

While I have no objections to the new art, I have to confess that the old images clearly represented rats, but the new ones I saw on the “Stealth Watch Repair” card today made me think of dogs for some uncomprehensible reason…

It’s the ears, I think. The old art had actual rodent-like ears, while the new art has inexplicable Mickey Mouse ears.

I thought it might grow on me at some point, but the more I look at it, the more I hate it. It’s just not particularly rat-like. Sigh…
edited by Patrick Reding on 3/24/2012

Agreed. I think that they look goofy. Which is odd, since normally this game isn’t like that. But for some reason, they’re comedy images.

I’ve made a request in the UserVoice forum to restore the old art. Let our votes show how much people actually care about this.
http://feedback.echobazaar.failbettergames.com/forums/25389-suggestions/suggestions/2712142-please-restore-the-old-rattus-faber-art

For the record, this is what a sad, skinny brown rat looks like: 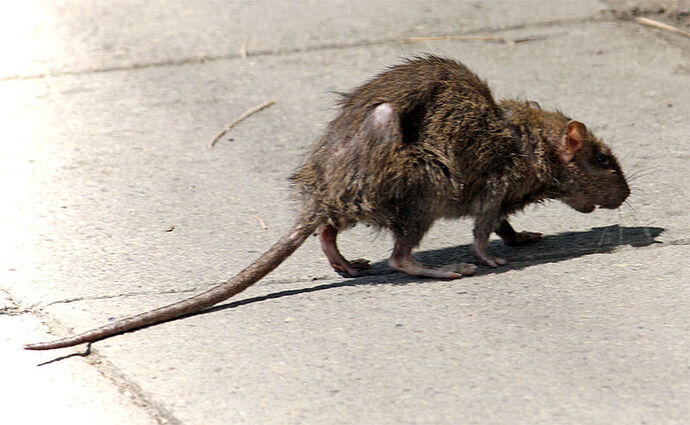 She looks so sad. It makes you want to give her a hug. Then seriously reconsider that action because she’s full of disease and would probably bite you. Still, d’aw…
edited by Patrick Reding on 3/24/2012

Well, I will note one thing: While I may prefer the old art for the small icon, for the big art I prefer the new one. Mainly because the old art had their hands look really goofy, which you don’t see in the small art.

My cache finally cleared, and I don’t recognise my rats any more. :( What happened to my cute, cheeky LBs?

I’ll add my ha’penny - I agree the old art work for teh rats was better - same with that ofr “Intriguing Gossip”.

[quote=Patrick Reding]She looks so sad. It makes you want to give her a hug. Then seriously reconsider that action because she’s full of disease and would probably bite you. Still, d’aw…
[/quote]

My husband likes to point out that rats are species enemies of humans. Consider:

And that’s independent of the diseases they might be carrying.

Ergo, we can’t really afford to have soft spots in our hearts for most rats.

I also liked the old art much better. The old art made the dumber rattus faber distinguishable from the shrewder ones, while the new art makes them all look equally goofy.

[quote=Patrick Reding]I’ve made a request in the UserVoice forum to restore the old art. Let our votes show how much people actually care about this.
http://feedback.echobazaar.failbettergames.com/forums/25389-suggestions/suggestions/2712142-please-restore-the-old-rattus-faber-art[/quote]
I too have added my support for this. Just waiting for the shock of the change to subside should work for most of the new icons, personally, but I still don’t like the new rats.