I tried to play the Secrets and Spending to finally buy my Consonant Violin with 5 Marks of Credit.

When I click the option the game tries to load the result but just goes to a white screen in the end.

It keeps doing this every time I try but I can play other cards and storylets without any problems.

Now for the really weird part:

I was playing The Silver Tree at the same time and the first time I played my Secrets and Spending card I played a card in The Silver Tree shortly after the screen going white in Fallen London. This was the result: 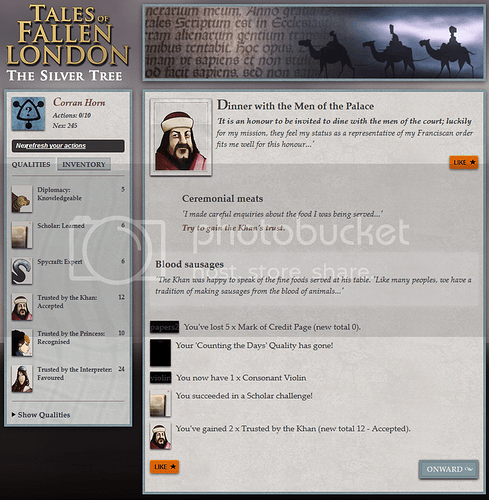 Did this mess up my Fallen London?

Obviously it should not be possible to get the Consonant Violin in The Silver Tree (as in the screenshot).

I’d really like to be able to play Secrets and Spending and get the Consonant Violin.

It’s fine. I’ve had this happen before as well. Basically, when the screen whites out like that, it’ll give your result on the next action you do (Apparently regardless of the game), but the items themselves were gotten when you sent the initial command in the first place.

Having tasted the Princess’s brews, spoken with the Shaman, and been touched by the Place of Whispers, I question the broad truth of this statement!

I do still have a problem in that I still can’t play the Consonant Violin option.

For now I just played the Numismatrix option and received a sixth Marks of Credit.

I will now grind back to 14 and when the card comes along again I’ll try for the Consonant Violin again.

Hopefully it will work then (and I’ll have a browser restart as well, which certainly can’t hurt).

I’m happy to report that my next attempt (with six Marks of Credit) was successful and I now have my Consonant Violin.

We’ve sorted a few issues - these problems should be good now.