Ok, so I’m new to the game. Just did a big leap of faith and traveled the expanse that is the &quotUnterzee&quot and somehow survived by turning off my lights whenever I saw an enemy and just going around the long way. After finally making it back and limping back to Fallen London, I got a LOT of money for the port stops I made. My question.

What is weight? What does it do? I’ve read it has no effect on speed/fuel consumption so what is it?

It affects the acceleration and deceleration of the vehicle but not the maximum speed of it, makes things awkward if you’re continually getting in fights, but no other issues.

[quote=Sir Frederick Tanah-Chook]RESULTS - from a standing start in Wolfstack Docks to the ship’s bow passing the southernmost point of the large rock south of Hunter’s Keep.

The trick is that more powerful engines have poorer fuel efficiency. If you’re using a lightweight ship, you’ll get less benefit from a powerful engine, so you might want to run a smaller, more efficient one. On a heavy ship, you’ll lose so much time using a small engine that it practically isn’t an option - but, at least you’ll have the cargo space to store the extra fuel!

Brilliant reply guys! Thanks a lot, i’m current running the default starter ship with a 1500 engine power engine. Didn’t realise it was actually not that great an idea although i’m about to upgrade to the ship i can get from Venderbight for the extra hull/hold cap and i think i can support the extra zailors atm (wouldn’t go any bigger though atm)

The Venderbight Yacht is a nice piece - not so well-suited for combat as the expensive purchasable ships, but very agreeable in terms of weight/hull/crew/hold balance, and its stat boosts are unparalleled. (Which reminds me - if you level up your Hearts, Veils, Mirrors and Pages as much as possible before getting the Yacht, you’ll get even more benefit from it, 'cause it’ll be able to boost you over the stat caps.)

I don’t think there are any hard stat caps anymore, it is just difficult to find ways to raise them as certain methods are capped. But praying to the gods and eating something mysterious (random SAY events) seem to keep raising the relevant stats. Of course there might be a cap but I haven’t found it yet.

I generally stealth past most enemies though. So its lack of attack isn’t much of a problem. Just it’s weight is 3000 instead of 1000 so I was wondering… Thanks everyone!

The trick is that more powerful engines have poorer fuel efficiency. If you’re using a lightweight ship, you’ll get less benefit from a powerful engine, so you might want to run a smaller, more efficient one. On a heavy ship, you’ll lose so much time using a small engine that it practically isn’t an option - but, at least you’ll have the cargo space to store the extra fuel!

Good advice as a general rule of thumb, but I guess it’s up to us to determine what’s the most efficient engine power for a given tonnage. I don’t want to repeat myself, but this is information the game should be forthcoming with, as it already is with several other systems. Engine power is currently cryptic, its worth hard to gauge for a given ship. And things are quite expensive to go around experimenting to see what works best on which ship.

I suppose engine power could be made to reflect that speed-efficiency sweetspot (i.e. 1000 power is optimal for a 1000-weight vessel), if I were to assign a more meaningful value to the stat. Less power for that tonnage and fuel efficiency decreases as you’re not travelling fast enough for the fuel you’re consuming; more power than optimal and you’re going faster but spending a disproportionate amount of fuel for it.

It makes the game a bit more difficult? I kind of enjoy that…

Those results could be explained by slower acceleration, however, especially if the distance covered is short. I’ve tested every engine in 5000 Weight and 3000 Weight vessels, as well as the Impeller in the Cutter, and the differences between the Weights are quite small.

It would be nice to get that barrels per hour compared with speed to get the equivalent of miles per gallon. It’s only after 10 hours of play or so that I’m able to buy enough fuel to not be watching the fuel gauge every second.

Not watching the fuel gauge every second is more dependent on getting a feel for your own fuel consumption rate, I think, and not your financial solvency. Once I worked out that going to X region with Y barrels of fuel would leave me with Z remaining barrels by the time I returned to London, I was able to relax and make on-the-fly route adjustments rather than sticking rigorously to the safest, most direct path.

I’ve certainly gotten better at that as well, but almost my entire first playthrough I didn’t have enough money to fill up my hold. When I finally struck it big, I bought the next level of lodgings, got a Scion, and retired.

Edit:Fuel consumption being such a mystery does leave me terrified to spend the money on upgrading my ship though. I’d like to have an idea of how much extra money I’ll be having to spend.
edited by Dewar on 2/10/2015

It doesn’t make a massive difference unless you change up your engines.

It would be nice to get that barrels per hour compared with speed to get the equivalent of miles per gallon.

Unfortunately there’s no particularly convenient miles-equivalent in the game, but: 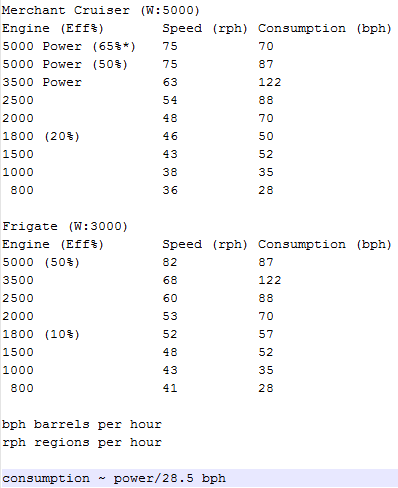 rph being &quotregions per hour&quot, or number of times you can travel horizontally from one edge of a region to the opposite edge.

Efficiency directly reduces fuel consumption, such that with 50% efficiency your engine will have half the bph an engine of that Power would normally possess.

It’s not on the chart, but the Cutter equipped with an Impeller was only a smidgeon faster than the Frigate, at 87 rph.
edited by Olorin on 2/10/2015

Thanks a ton Gregg. That simple chart has made me much better informed what I’m getting. I don’t think I’ll be upgrading my engine any time soon, but I might get a bigger ship.

I think a lot of the folks around here have a ton of experience and forget how hard it can be to get those first few thousand souls, and how difficult it can be to risk it when you’re not very well informed.

I take it that’s just on speed 2 without Full Power, though? And is it from a standstill, or from full speed? In practice, as soon as i can afford to, i have Suppression and spam Full Power whenever I’m not actively fighting, and i assume that’s pretty common for all of us without vast stores of patience :)

Personally, I’d never waste the fuel. I puttered around on speed 1 for a long time thinking that increased my fuel efficiency.

I prefer the Milebreaker in my aft (sorry, crew, you know I’m still a sight kinder than most of the other captains out there…)