Its a really big goal of mine to try to get a Lease to the Premises at the Bazaar so that I can upgrade it before Penstock’s Wicket closes (and with the help of you fine companions I was able to arrive at this date with many A Taste of Lacre and Pails of So Called Snow).

Someone suggested the Temple Club as an alternative to grinding Bazaar Permits and I thought maybe I could get someone’s opinion on this?

And, if am fortunate, maybe even an invitation?

Its about the same price, but with 250 collated research instead.

Its about the same price, but with 250 collated research instead.

I guess what I am trying to figure out is…
I am almost have my own Gang of Hoodlums but my Shadowy isn’t extremely high
So would it be easier to grind Bazaar Permits or Collated Research? I still have access to the University

Unless you have a lot of academic items to upgrade, its probably easier to use the bazaar permits. Since you have the PoSI option to raise casing, you can skip shadowy challenges.

Also remember that you can convert Touching Love Stories to Bazaar Permits (25 stories for 5 permits), if you happen to have a stockpile of those. While it’s probably not the most cost-effective way of grinding the permits, I got from 15 to 50 permits in about a day mostly from side-converting my third tier items to Visions of the Surface, and then converting up to love stories and then to permits. Not particularly efficient, I’ll admit, but if you tend to hoard items like I do it may be worth considering as a faster alternative to thefts of a particular character.

This chart was especially helpful, if you decide to go this route.
http://echobazaar.wikidot.com/item-conversions

Also, if you haven’t used the &quotA Rainbow of Offerings&quot storylet in the side-streets yet, the option from the docks gives 6 permits as well as 6 strong-backed labour.

What is the “Temple Club”?

The Temple Club is a location for backers of the Kickstarter for The Silver Tree. Members can send one-time invitations to other players; there’s a thread for requesting invites in the Singing Mandrake subforum.

You needed an Access Code to open the Place of Whispers. I don’t know if that has changed with the all-free access now. If yes, then you should be able to activate the PoW with an option at the “The temples” pinned card. Pow is an extra pinned card where you can mostly gamble Trust for Secrets.

[quote=Mint Humbugs]Estelle said, when I asked if they could share a bit about what the Temple-Club’s counterpart special backer-area inside of The Silver Tree was like, that all the Silver Tree paid content is currently free.

She is incorrect, as far as I know, as despite 2 playthroughs of The Silver Tree, I have not yet found any &quotPlace of Whispers&quot.

So, could someone be so kind as to please tell me a bit about what it’s like, privately or not?[/quote]

This will give you:

If you would like to replay The Silver Tree each time you start a new game you can apply the access code again to restore your in-game content. We’ve allowed you five separate uses of the code - enough for five replays.

Apparently you are correct; it is not nex-locked but rather kickstarter exclusive - there is no option to activate the Place or the two KS stories. I’ve taken the liberty of taking a screenshot, since it is mostly utility like the Temple Club and I could only use my code so many times before these stories are no longer up for access by anyone. With sufficient progress in the Covert Mission, you can pursue &quotDiscovering the Other Place&quot or Parabola, but I have no desire to return to these grinds just yet. 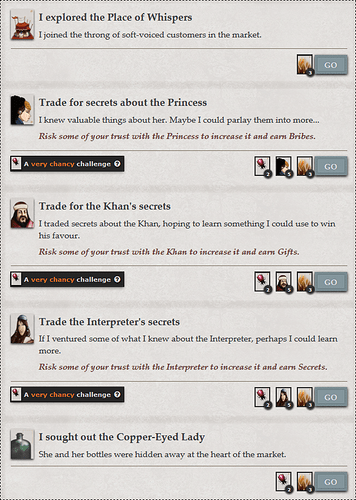