The island is a node. You feel the connections spiralling out, everything hitched to every other thing as your view widens to encompass an entire universe.

Then: a blackness, spreading over the wall. The Cynic is still babbling away. Does he not see it, too?

You glance back, and the shadow is gone. 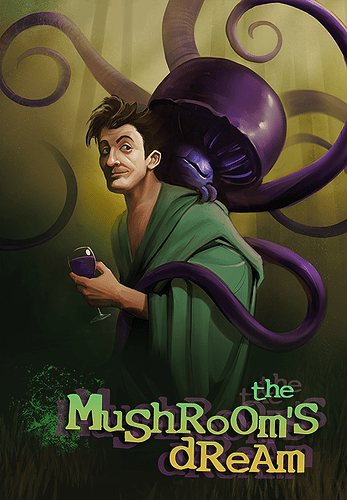 The Mushroom’s Dream is your Premium Story for Christmas 2022!

Something is rotten on the Mangrove College. Once-aimless philosophers have a newfound purpose, and the Mangrove Schools vie for intellectual dominance.

Delve into the swamp of philosophy and help the Unreconstructed Cynic synthesise his transient philosophies as you both seek the truth that lurks at the heart of the Wisp-Ways.

Buy the Mushroom’s Dream for 25 Fate, either from the Fate page or on the island. And mind the Blemmigans…

Mangrove College yay! I was so hoping this location would be a part of the Zee updates!

It’s snowing outside, I made flavoured hot chocolate, and the annual Premium story just dropped. I don’t care what the calendar says, Christmas has started!

I harvested way too many fruits and most of them ended up rotting and I’m out of actions. But, I’m one with the universe now so I think my day is going pretty good.

That’s quite a new take on the art for the ES.

OK, now I have something on my shoulder or head. Hmmm .

I’d appreciate a hint re. the nature of the content (in a PM if necessary), since the levels of body horror in the ongoing Naturalist story are not enjoyable and not something I want to pay Fate for.

Checking Wiki I see that this story has a nice reward: Diogenes, a +1 Mithridacy hat! This is a great alternative to the limited Whitsun hat or Hallowmas Fate ones; we get a story attached to it.

I’d appreciate a hint re. the nature of the content (in a PM if necessary), since the levels of body horror in the ongoing Naturalist story are not enjoyable and not something I want to pay Fate for.

This is unrelated to Evolution; just the yearly season story.

And what does it mean “yearly season story”? It’s the first time I am playing FL during end of the year.

You know, I thought my post was quite clear, but apparently not.

But to spell it out:

Yes, I am aware of what this is. I have bought previous seasonal stories. I am also perfectly aware it is not related to Evolution.

But. There has been a trend recently, including in ES, to have body horror elements. I don’t enjoy them. I mentioned Evolution as an example because it is awash with them. I find the whole tale disgusting.
So before I spend actual money on this year’s seasonal story, I would like to know whether that applies there.

But. There has been a trend recently, including in ES, to have body horror elements. I don’t enjoy them.

Oooooh, sorry! No, I didn’t understand that at first, but now I do. Hmmm, maybe a feedback to FBG regarding this matter.

Stories not related, at least directly, to any other story in FL.

The first one was The Gift which is an amazing story! It had some tie-ins later on, but you could play it, enjoy it and perfectly understand it! Playing further stories will just add more and more flavour to the initial one and to the whole universe!

I’ve finished the content, no body horror that I saw.

The one-off story didn’t really hook me, but it was enjoyable and a bit weird (said with affectionate).

Still mulling over the payouts for the permanent carousel, but the one that sticks out to me is Storm Threnodies which are otherwise pretty inefficient to grind. Might optimally be 12 actions for 4 Threnodies? The EPA wouldn’t be bananas, but it’d be significant if you specifically want Threnodies (which, with Christmas around the corner, might be desirable in large quantities!). It’s muddled a bit by your hand getting clogged with Cards that don’t help, but one of those pays out 10 Solacefruit which is pretty good Hinterland Scrip while cycling Cards.

That’s quite a new take on the art for the ES.

I was going to say “an old take” because it makes me think of Sunless Sea era art (which isn’t a bad thing, I still really like the style of ~2015 art assets). Can’t quite explain why, although the story’s setting might be biasing me.

By my count it’s 10 actions. And Storm-Threnodies are a Rat Market input, which pushes the EPA up considerably.

Action count let me know if I’m missing something:

Ah, I missed the 0-action costs at either end. That’s surprisingly good, then! Still might end up in a situation where you’re acquiring excessive profitless Rot to clear a slot for a Yield Card (or at least the 10xSolacefruit one) even if you are playing Cards strategically, although based on the few loops I’ve run it’s usually only an extra 1-2 actions (and sometimes none).

But the hat sounds like a good enough reward especially if you missed/skipped the alternatives! Good enough to jump all other stories I have. So I have to ask, is this a long story or something you can do in a day or two?

Yeah, the hat is about as good as the Tuneful Hat, and compared to cost for seasonally-available items it’s worth the price of admission on its own.

Completing the story took me a whole day of playing (starting in the morning and using all my actions through the evening). I also wasted a few actions not being familiar with mechanics. It’s on a zee-island so going back and forth isn’t trivial, but it’s also close to the Khanate.

I enjoyed the story. A close look at one of the weird little corners of the Neath, and those mushrooms doing what they do. There are a few parts that are nominally grindy, but they didn’t feel too bad because they were short loops with large chunks of story text at regular intervals. And it definitely felt fully integrated into the story.

I started a story and faced into “tough location, come later” situation. I think I’ll come later. Who could thought that philosophy and philosophers could be so dangerous?

This being Fate content I assume this means there can be no wiki page to help with the mechanics of the Wisp-Ways?

I am probably alone in this thread in being extremely confused - I like the writing (and Diogenes, more blemmigans can only be good. Well, probably up to a point…) but in not really getting the process I’ve become frustrated and am just trying to finish and get back to London.

The in-game ‘help’ doesn’t make sense to me: my experience with FBG provided tips is that they only become clear once I already understand. Then I’m like “Oh THAT’S what they meant”, about 60 actions after it would have been useful

This being Fate content I assume this means there can be no wiki page to help with the mechanics of the Wisp-Ways?

Mechanics are fine, the wiki just won’t reveal any narrative information or story elements, which means they won’t put up individual pages for each action like with ordinary content, but a guide can summarize strategy and how to navigate it. This being new, Fate-locked content the guide’s still in progress and currently focuses on the repeatable loop instead of the story elements, but the loops in the story function the same way as after the story (except instead of cashing out for the listed rewards the story asks for a specific set to progress the story).