Today, I’d like to introduce another supporting player in Mask’s cast - the Clay Lodger. Or, perhaps we should use his real name: Moss-on-Limestone. 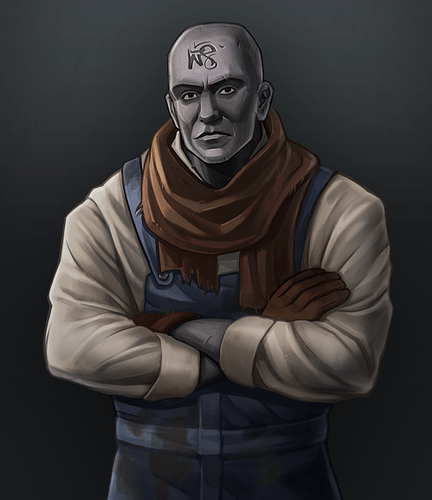 The Clay Lodger was introduced as a stretch goal back in our Kickstarter campaign. For those familiar with our other titles, his introduction was intended to signal our inclusion of other Neathy characters in Mask, diversifying the range of characters within the cast.

For those unfamiliar with our wider setting, Moss is a Clay Man - which is very much what it sounds like. The Clay Men hail from the living city of Polythreme, an ancient power across the sea from London. In that city, all manner of things are said to be alive and speak with their own voices - including its statues.

Clay Men have appeared in several of our titles as recurring characters, ship officers, romance options, both as stalwart companions and bitter enemies. Clay Men have a particularly prominent role in Fallen London, where they’ve developed a long and complicated relationship with London following the Fall.

Mask, being set some thirty years before Fallen London, offered a space to explore the development of that relationship from its outset - to investigate what that initial encounter might have looked like, both in how Londoners might have reacted to the Clay Men, but also how the Clay Men adjusted to life in London.

All that said, we wanted Moss to have a unique perspective and a personal history specific to him, rather than to act as a stand-in for the entire body of Clay Men as a whole. We also knew from the Kickstarter that Moss carried with him a mystery of his own.

We took the opportunity to work out some of the more unexplored elements of Polythreme’s relationship with London - and the cities that came before it. In doing so we were able to establish a timeline for Moss’ involvement with the fallen cities - and to chart areas of pre-Fall history involving the Clay Men that we’ve not had a chance to explore before. There are, we hope, some fun connections with our established lore too, grounded in a new perspective; that of a Clay Man beginning to establish his identity outside of the familiar structures - and strictures - of his homeland.

Developing Moss’ voice took some work - we wanted him to have a unique cadence, contrasting that of other characters. This has manifested in a number of ways. Chiefly, in his affect - his personality operates in a different register to many of the other characters. He is not perturbed by the events of the Fall, but like most of London, he is a fish out of water and struggles to keep up with the brave new world in which he finds himself.

The other way Moss presents differently from the rest of the cast is his use of ‘Loamsprach,’ the language of the Clay Men. We were, alas, unable to establish a complete and accurate English-to-Loamsprach dictionary, and instead have resorted to including a variety of phrases in the original language, which punctuate Moss’ speech. Close observers may even be able to discern their meaning here and there.

Moss will appear around Yuletide to take up a room as a lodger in the boarding house. To say more about the circumstances surrounding his arrival at Horatia’s would be to invite spoilers. Suffice to say he is likely to experience some turbulence fitting in - unless, of course, the player chooses to take an interest in this taciturn Clay Man and help him find his feet as he establishes himself in this new London.