The Awesome Power of a Dusty Bookshop…

…and no idea what the hell to do with it. 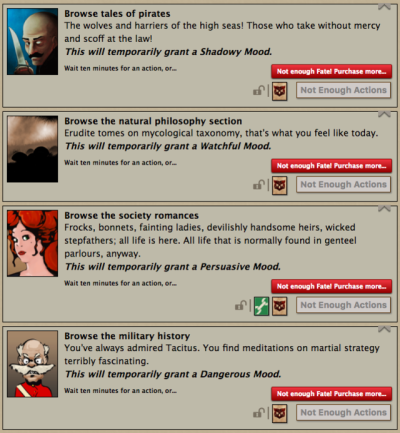 No, really. I have no idea what to do with an hour-long +30 to one stat (I checked the wiki). I’m at a bit of a story plateau, so far as I can tell, and nothing springs to mind that would benefit from the boost. But I don’t want to just discard such an opportunity! Any suggestions?

I have base Watchful 131, Shadowy 141, Dangerous 155, Persuasive 144. Been working through the Making Your Name stories lately since they were added during a long hiatus I took from FL, but I’ve already got plenty of stat-boosting equipment for those… and I’ve hit the content barrier in Ambition: Nemesis.

Suggestions? My plan was to get myself back into the court next, but I’m in no great hurry; are there any good story tidbits I could see with this brief moment of enhanced power?

Moods are usually used for:

Unless you plan on doing one of those in the near future, I’d recommend just using it for some guaranteed successes on grinding, or discarding the card entirely.
edited by Optimatum on 3/17/2018

Yeah, unfortunately they’re not as awesome as they seem. The best uses of moods are getting to stat levels that you basically can’t get to without them - Watchful 300 for scholar of the correspondence, Persuasive 290 for Poet Laureate. But at mid-level stats, there’s nothing a mood can get you that you could’t get with normal play anyway.

Just use it whenever you’re about to play a few non-straightforward challenges and have a full candle. It’ll save you one or two failures maybe.

If you have the space on your card hand, I would recommend just saving it until later. Much later. As of now, there is nothing you can use it on that you can not do later. However, it is pretty much essential for statuses like Courier’s Footprint and Poet Laureate, or for impossible challenges like hunting an Impossible Theorem(Watchful 500, meaning you need 500 just to get 60%). For now, save it. It is a rare card, so it will not come up again for quite some time.

Tldr: Save til later when you are at the end, yet something is still impossible.

[quote=Harry P.]It is a rare card, so it will not come up again for quite some time.

Tldr: Save til later when you are at the end, yet something is still impossible.
[/quote]
It’s rare but not exceptionally so. I generally get at least one per month. I would only save it if you know you will have to use it relatively soon. Having one of your card slots occupied for months is not worth it in my personal opinion.

I particularly enjoy archaeological expeditions, so in the past (not so much at current stat levels) I would gather a nice stash of expedition supplies, apply the Watchful boost, and zip through multiple expeditions at the top level without loss of supplies or actions. Very useful for fate-locked expeditions.

Ideally used for a concerted grind effort, or even one particular task that you may need a bump for. Even at advanced levels it can come in handy from time to time.

Though I agree with what was said above about frequency in the deck. While uncommon, it does come up often enough that there’s no need to hold in your deck.