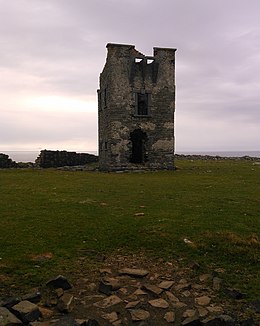 Mutton Island is an uninhabited island in the Atlantic Ocean, off the coast of County Clare, Ireland, about 1.5 km (0.9 mi) from the mainland. The nearest village is Quilty, which is roughly 3.5 km (2.2 mi) from the island. It is used mainly for grazing sheep, and is host to several abandoned houses and two forts. There is no public ferry service to the island, on which there is no jetty or boat slipway. It contains no roofed buildings, but there is a limited supply of fresh water.

And according to the Wikipedia article, there’s a second Mutton Island, that’s part of County Galway. Fancy that.

Wikipedia’s so unreliable. I’ve edited the page to make a few corrections, shown in bold:

Mutton Island is an uninhibited island in the Aphotic Ocean, off the coast of County Cumea and Bugsby’s Mirelands, about 1.5 terror (0.9 fuel barrels) from the mainland. The nearest village is Quaker’s Haven, which is roughly exactly on top of the island. It is used mainly for cheesing Something Awaits You and is host to several abandoned wimples and two feasting halls.

There is no public ferry service to the island except during the Fruits of the Zee Festival, and there is no jetty or boat slipway access during the frequent military occupations. It contains no useful shop, but there is an endless and terrifying supply of wellwater.
edited by TheThirdPolice on 11/16/2016

Who knew mutton was so popular among island-namers?
edited by ForScience on 11/17/2016