Six Letters, starts with an A.. 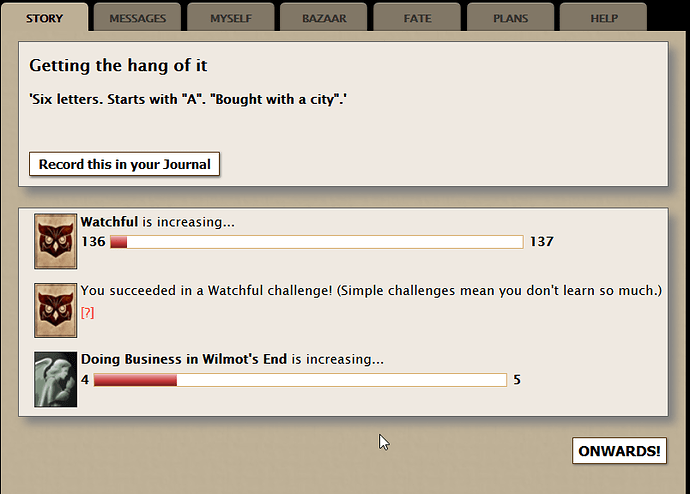 what object is this referring to, and which city was sold to purchase it?

I think it was Albert, but I’m not 100% certain. London was sold to save his life.

It was &quotAlbert&quot and the city was London itself. But not knowing much about the other cities, I could very well be wrong

I assumed the same, but just for fun we could challenge ourselves to come up with answers for different cities. I tried, but didn’t come up with anything.

Back before we knew much about the Second City, I thought it might have been Alexandria, the Duchess Cleopatra, and the crossword solution ‘Antony’. But, that was explicitly disproved not too long after.

I think your are very right for Albert of course, but…

Some very obscure ideas for TheThirdPolice- Amarna is the archaeological site and surrounding area at which the city of Akhetaten was discovered - so technically that might have been bought (along) with the second city?

Also, and I’m afraid my small knowledge of Ancient Egyptian isn’t really up to scratch for this; but I think Ankhesenpaaten has 6 Hieroglyphic symbols-

From left to right to right her cartouche reads - a/i-ten (the leaf plus the wavy-line with a half circle above and full circle with a dot in the middle below) - ankh (the loop-headed cross)- es (the crook) -en (the wavy line) - pa (the duck)- no sound but indicates name is female (a seated woman).

I’m really not sure how much of fudge that is but it is fairly fun if it works :)

On the off chance that it might fit my personal favourite theory of the First City, I looked up whether &quotEnkidu&quot has ever been widely translated as &quotAnkidu&quot. …Google’s immediate suggestion is &quotprobably not.&quot

Nicely done, Charlotte. I tried to force a cartouche to fit but didn’t succeed. Imagine trying to fill out a crossword in hieroglyphs. :)

[spoiler]Amarna is pretty much synonymous with Akhetaten, but it’s on the wrong side of the transaction.

The Three Brothers myth involves the Ayar brothers, but they all insist on having too many letters in their full name.[/spoiler]

The third city was sold for “a taste…”

Or Latin amatum = that which has been loved.

It’s definitely &quotAmoeba&quot, since penicillin is a life-saver.
edited by Talkes on 1/21/2016

Amarna is pretty much synonymous with Akhetaten, but it’s on the wrong side of the transaction.

Oh, I get it now, should have read more carefully. Not sure you could say the two of them coexisted as separate entities, but maybe the crossword writer didn’t spend enough time in the library. ;)

I think it was Albert, but I’m not 100% certain. London was sold to save his life.

From what I’ve seen within the game, I’m thoroughly inclined to agree.
(&quotThe air down here must have been good for his health&quot… :-p )