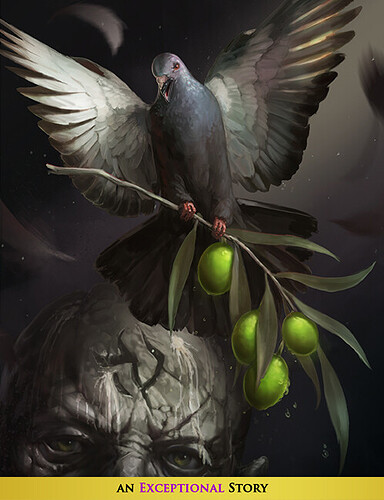 “There’s the rustle of bird wings, a strange squeaking sound. And a sight all but lost to London – pigeons! They wheel and swoop along the street, revelling in flight.”

London’s bird population has suffered since the Fall – robbed of their skies, forced to compete with bats, and preyed upon as easy meals. But the Unremarkable Fancier has plans to improve the humble pigeon’s lot. Help the struggling Philoperisteron Society elect a new chairman, learn the secrets of the Delightful Dove’s ever-sprouting twig, and find these birds a new place in the day-to-day life of the Neath.

Huh! I wonder if this was written by…

Finally! I can´t describe the excitement about having some birb-related ES in the neath. <3!

I didn’t realize the Neath had birds until this story!

I mostly supported the actual pigeon’s idea of flying away to Stone because frankly, it is genuinely the best possible outcome for a bird and it can’t be THAT hard to get there if ships regularly arrive at the shores of the Elder Continent. Then I couldn’t bring myself to kick the Fancier while he was down, and apparently that was enough to tip the scales in his favour once I sat back and let the pigeons themselves decide.

…I wonder if you can fly to Stone’s garden on Vake-back? As another ES showed, you CAN fly to the Prester’s table if you know the right shambling swamp monster’s maw to fly through.

Pigeons can talk in the Neath. This is certainly not universal among species of the Neath, and I wonder why pigeons (and doves and suchlike) were blessed with this privelage? If I were to guess, I’m inclined to say that the Mountain favors certain animals. But then… bats. They’re somewhere in-between pigeons and rats, who can both talk, and yet do not seem to have the power of speech. Perhaps Stone has antipathy towards them for resembling the Masters?

Pulling this thread further… pigeons showed they could talk, and people still ate them after the Fall. I mean, they were in bad shape for food, and this is a setting that’s not shy about straight-up cannibalism. But that paints humans in an even worse light.

In the end I didn’t think the Fancier is up to the task they set for themselves. They’re willing to put in work, but they’re not able to put in anything other than work. Being worthy of empathy doesn’t actually get you empathy, it gets you begged tablescraps. I might have been inclined to the viewpoint that the Pettifog advocated for, but I didn’t trust her so I didn’t get that opportunity.

Good luck with the Mountain of Light, little birbs. I don’t think it’s where we belong but maybe you’ll get a warmer welcome and an open gate that we do not.

I think the idea is that, in spending time around pigeons, we learn to speak a little pigeon. Just as, while we may not be able to understand all the squeaks of bats, we do know when they’re demanding their sodding crickets. Pigeons seem to be less adept at expressing themselves than cats and rats - who speak English - but more than dogs and horses - who, in so far as I’m aware, don’t speak at all.

Pigeons are remarkably expressive birds when one cares to pay them attention, and the Dove is a skilled orator. They can speak English, though they rarely choose to. The Dove speaks to them in their own cooing, trilling language.

It is explicit that there are birds speaking English. Although on closer inspection the referent of “they” is ambiguous, and it’s possible that only Doves speak English, but not pigeons.

Ah, good spot - I had assumed most of their discussion was in Pigeon. I notice a reference to bats talking elsewhere in the story, too:

The pigeons are a hit. They are positively eager to please. The bats are suspicious of the encroachment, until they realise they can palm off their less desirable work.
The pigeons do pick up some rather colourful language, however. By the end of the day, they are demanding their ‘sodding crickets’ with gusto.

Also, remember that we already knew Neathy ravens could talk. Some of them speak only in poetry, even!

When I saw the phrase “Aachen Lacquer Shield Owl,” I thought, “Is that real? That’s way too specific, that’s got to be real. Let me Google that. Yup, it’s real.”

Pigeons can talk in the Neath. This is certainly not universal among species of the Neath, and I wonder why pigeons (and doves and suchlike) were blessed with this privelage? If I were to guess, I’m inclined to say that the Mountain favors certain animals. But then… bats. They’re somewhere in-between pigeons and rats, who can both talk, and yet do not seem to have the power of speech. Perhaps Stone has antipathy towards them for resembling the Masters?

Bats in Sunless Skies can talk, I believe. Here’s one of the outcomes from sending the Diffident Bat to scout: “Your bat returns in a huff and spends ten minutes complaining about what it found.” Here’s another for the Star-Smitten Bat: “Your bat enthusiastically reports a dozen findings. Cross-examination reveals fewer of actual interest.”

Absolutely no possibility that I wouldn’t support the pigeons’ opportunity for their utopia even if the Fancier was very sympathetic! Still I’m glad some pigeons stayed in London after all so that he still feels a purpose… I have to say, though, that at the final stage, it’s a bit disingenuous to choose to leave the decision to the pigeons, when we know what that decision will be based on our previous actions. Or am I mistaken and it truly was even odds what the pigeons would choose? (Fwiw I had “stay” and “leave” at equal values and the pigeons followed the Dove leaving the city.)

I thought bats talk in FL too, no? “Sodding crickets” etc?
…
Actually, I thought all animals talked in FL…or at least communicated in some fashion practically indistinguishable from talking…?

That’s what I thought. In fact, the Neath is a place where one should assume ANYTHING may or may not have an opinion…and may or may not choose to express it…even your chair.

I really enjoyed this one. In fact this is the first Exceptional Story I can remember in which I actually had the option each time to do what I really wanted to do. Great writing, or great minds thinking alike (jk) or something. I was pleased to be able to pick the bird’s brain about her find, and still support the Fancier and let the Dilmun Club know what I found out. It, uh, dovetailed nicely with the Youthful Naturalist storyline I just finished (for now). I left the pigeons to their own decision, but my character was worried that if they all flew off across the zee, and something went badly wrong, suddenly there really would be no more pigeons in the Neath at all. So I’m glad the Dove chose to stay for the time being. Yay!

What are the rewards for the three different decisions in the epilogue?
(In case there are different epilogues based on our previous decisions, mine is about what to do with the ever-fruiting twig.)

Also, I guess someone who supported the Pettifog all the way through got to find out who her friends were in the end? Because I’m really lost as to who it is she was so desperately trying to bring around (and what her actual goals were).

For me, this story was a bit meh. Not bad, but… it kinda never really engaged me. So I’m going to make my final decision based on best reward.