So I thought I’d start this thread now that we have had time to play around with the latest patch![li]

Not losing your remaining fuel when docking is an amazing benefit! it definitely changes the dynamic of game play for the better.
Supplies still feel like they are consumed at an alarming rate, the journey out of London Harbour and two thirds of the way to hunter’s keep seems to be a supply. But that is manageable and I can cope with it.

Terror right now is what is destroying me
It edges up over 50% and BAMF in come the Roused at Midnight events and there are very few benefits right now in the reducing terror attempts. I’ve been slowly building up my ship and my wealth to the level where I feel i can finally head out and explore! But with my terror so high I dare not do so.

Have also noticed things like Roused at Midnight coming in double or triple whammys out of nowhere. And in strange places like Wolfstack Docks or coasting in to the docks at the Tomb Colonies and Whither. If I was a terrified Zailor and I could see the sparkling lights of safety literally just over-board I don’t quite think terror would drive me to killing myself when the shore is so close at hand.

Otherwise I am starting to feel like the game is awesome and sucking me in for hours of time vanishing as I explore the Unterzee!

I agree! I really enjoy the game, started a first try today and had to force myself to stop after 3 hours.
But on my last trip I was finished off within the sight of the London Dock by 5 roused at Midnight events in rapid succesion until all my crew members were gone.
edited by Joanna on 5/1/2014

[quote=Joanna]I agree! I really enjoy the game, started a first try today and had to force myself to stop after 3 hours.
But on my last trip I was finished off within the sight of the London Dock by 5 roused at Midnight events in rapid succesion until all my crew members were gone.
edited by Joanna on 5/1/2014[/quote]

[li]
Is that the event where a crew member kills themselves because of high terror (usually between 50-60)? Because that is definitely a bug and it killed 5 of my crew in 3 minutes last night.

Has the market at Whither changed for anyone? I’m still getting the London market options.
Otherwise the update seems solid. Seems like more monsters are spawning, which is nice give my first 2 days saw me fighting only 1 crab. Lifebergs and stuff spawning now. Caged Shark still has the ‘Angler Crab’ result page though.

I agree with Terror, I think the ‘Roused at Midnight’ and other response emergencies need to be spaced a bit, sometimes they get so frequent its hard to solve the issue. I lost 4 crew because I couldn’t click ‘Dock’ for the messages popping so rapidly, for example.

Maybe when more content comes through there’ll be more variety to the terror events?

I was thinking that if you got some that gave you a slim chance of talking the Zhailor down off the rail the storylets would still build tension, but wouldn’t necessarily be an immediate death sentence.

I see someone has beaten me to this. In general, I think that we need a zone of safety around ports. This should be a certain radius (higher around known friendly ports like London, lesser in other more salubrious ports). This would prevent frankly bonkers events like zailors eating each others’ latissimus dorsi when they’re in spitting distance of a dock…

The only thing that’s annoying me even slightly right now is I’m really unclear on when a particular action is going to mean &quotok, you don’t get to do anything more at this port, gg nextport&quot and when I can keep picking new narrative options and stay at the port. Sometimes I click an option thinking it’s the option to get a Port Report and instead it’s some narrative thing and then I can’t do anything more there without going away and coming back. Sometimes I can do multiple narrative things. Sometimes choices appear to make irrevocable alterations to the game and cut off other options like at Hunter’s Keep (which is fine but something I wasn’t expecting given the general constancy of places in Fallen London).
[li]
edited by Dr. Hieronymous Alloy on 5/1/2014

I agree with the Argonaut, some clearly bonkers behaviour occurring when I am sailing through a friendly harbour!

I did just sale south and find the Carnelan Canal and the Republic place holders! Much excite!

[quote=Aesc]I agree with the Argonaut, some clearly bonkers behaviour occurring when I am sailing through a friendly harbour!

I did just sale south and find the Carnelan Canal and the Republic place holders! Much excite![/quote]

oooohhhh - that sounds exciting! I shall prepare the port and cigars, and investigate forthwith!

not much there yet but it was much YAY upon discovering it! I am however now out of port

Note: hugging the shorelines seems to be a good way to avoid Terror loss. I think that’s what those little lights in the Zee are for: they’re markers for the “safe” zones.

MOD NOTE - I didn’t find any prohibition/request not to show pics, just no &quotLet’s Play videos&quot or similar. But if not OK, this alert says ‘here’s an image’ :-). [spoiler][li] 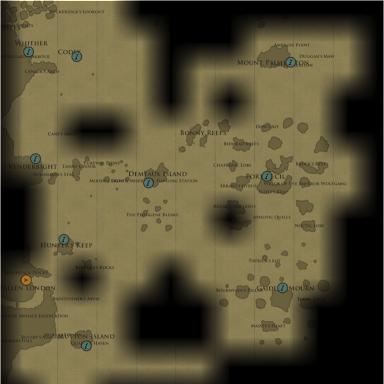 [/spoiler]I suspect that’s most of the currently-built zone, although I need to get back to the SE; I had just used all my crew taking prizes before I could go that far.

Currently really just waiting on ability to interact with officers. I’m sure that they have stories to tell…

You can interact with SOME officers to spend Secrets to raise a particular stat, but not all of them seem to have the option to speak with them, and on it least one of them clicking on the option just does nothing.

A potential solution to crew members leaping to their doom just outside FL’s harbor is to have some cards firing limited to when “The light is dim, you are gaining terror” or when the light is bright and you are not gaining terror. Some sort on internal cool down on menaces wouldn’t suck either.

It’s really difficult to lower Terror once it hits 50+ and you start getting the Roused at Midnight cards. Having a drink (or 3) in whatever port bar you’re at doesn’t reduce very much Terror at all, while being really pricey. I would love it if being docked at a well-lit, hopefully friendly, port would reduce Terror a little bit. Maybe on a timer, or something, so that for a minute or two after leaving port Terror would go down a bit.

sends port in the post via his gentlemanservant to Aesc

I agree that it would be a good solution to reduce terror somehow if you are close to a ‘friendly’ port.

Even though Fallen London is a scary place, it feels intuitive sense to me that the terror of the crew would decrease once in familiar waters.

My first impulse (while being still somewhat unfamiliar with the game mechanics) on reaching high levels of terror, was to go back to London as fast as possible. Sadly for may character, this did not help at all.

[color=#009900]In earlier builds, terror actually dropped if you were in well-lit areas. But what we found was that either the effect was so subtle no-one cared, or the optimal strategy was to lie just off the coast and soak up the rays - not spending fuel, only spending food - rather than dock and use story options. This was both narratively odd and not very exciting. :-)[/color]
[color=#009900]
[/color]
[color=#009900]You will find that your terror stops increasing if you’re in a well-lit area - we’re working on making lighting more visible / comprehensible. Of course, this won’t help if you’re already at very high Terror, but we’re also looking at more variety and altered pacing in Terror penalties.[/color]

What qualifies as &quotwell lit&quot though? I find that my Terror still rises even though I am close to lighthouses - sometimes in the very path of their light beam! I know you said there are about five different kinds of &quotlight&quot the game takes into account - communicating which raises where, and why, would be a welcome addition.[li]
edited by IHNIWTR on 5/2/2014

[/li][color=#009900]yes, this is absolutely an issue - that’s what I meant about making lighting more visible / comprehensible. It is literally something that Paul and Liam are looking at right now.[/color][li]