at present, i think i don’t have university access. i did the questline a long time ago, and i sided with the provost of summerset, and agreed to cover things up. yet i still got kicked out, i’ve no idea why

since then i’ve done the whole archaological voyage thing, and gotten lots of notes. ALthough i can’t recall exactly what i did with them, besides making a bifurcated owl

In arranging my research at my lodgings, there’s an option to regain university access:

I don’t have enough notes for it right now, but i could get them. What’s worrying me is that fourth requirement, the quality that i’ve moused over. I don’t seem to have it.

Infact, i searched through all of my qualities and the only university related thing i could find, was this:

So i’m not sure what’s going on here, did i buy access again but not remember it? do i have to do something else for it?

my current options at the university don’t look very full. there’s no socialising with peers, or cricket with devils, or any of the other interesting things i remember 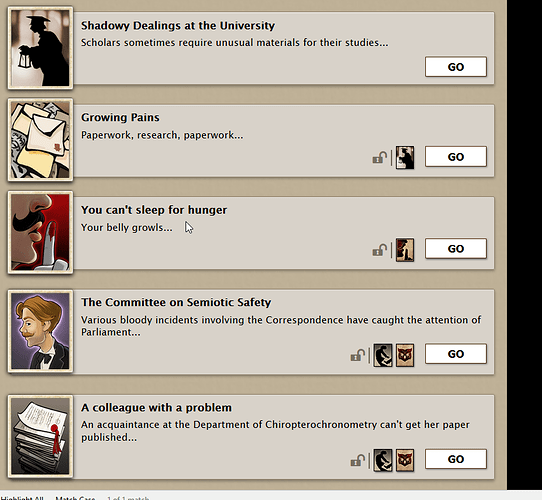 Returning to the University will not reestablish the carousel, but it will unlock several options.

Whether you were actually kicked out or not depends on what you chose at the end of the University storyline, and it looks like you did not actually get banished, so you don’t actually need to reestablish your credentials.

you aren’t kicked if you have tales of university 40.

Returning to the University will not reestablish the carousel, but it will unlock several options.

so is this it? this is all i get from the university from now on? :(

i’m afraid that the answer is yes

Yeah, the interesting stuff at University happens before you conclude the case of the Murder. Now there is very little to do there, beyond trying to manufacture an Impossible Theorem. Everything that was actually interesting and had a progress quality attached to it is now but a distant memory, I’m afraid.

All the interesting stuff happens when you’re a Guest Lecturer, with Featuring in the Tales of the University at exactly 5. Once you start setting up your own department, the ‘Term Passing’ carousel closes off.