In this thread: incursions of films, fiction, or the like into the Fifth City. Quotations and commentary are good. To start, a gimme and a slightly harder one.

Most of the recurring dreams are named after the five sections of T S Eliot’s The Waste Land. The dreams and sections mostly don’t have much in common, although ‘Death by Water’ describes a drowned man. When you ask Schlomo about particular dreams, his less comprehensible remarks are mostly remixed lines from the poem. You can even get him to quote The Love Song of J. Alfred Prufrock. Then there’s the five unreal cities with falling towers… and probably a bunch of other references and parallels.

The Hound of Heaven is a charming poem about someone trying to escape an Overgoat*:

I FLED Him, down the nights and down the days;
I fled Him, down the arches of the years;
I fled Him, down the labyrinthine ways
Of my own mind …
…
From those strong Feet that followed, followed after.
But with unhurrying chase,
And unperturbèd pace,
Deliberate speed, majestic instancy,
They beat—and a Voice bleat**
More instant than the Feet—
‘All things betray thee, who betrayest Me.’

One that comes to mind off the top; &quotthrough a glass, darkly&quot, the fidgeting writer storylet, is a reference to a bible passage; 1 Corinthians 13:12, or possibly one of the sundry works of art that reference it also.

Also: I’d always been curious as to whether the thief-character Fast Hetty was a possible reference to the classic-lineup Motörhead guitarist? I kind of hope that’s the case.[li]
edited by Dawson on 8/5/2013

So… the Calendar Council is a reference to the anarchists’ General Council in The Man Who Was Thursday. In Neil Gaiman’s Sandman, on a shelf of unwritten books in the realm of dream: G K Chesterton’s The Man Who Was October.

A reference, or just parallel thinking?
edited by Flyte on 8/5/2013

I know I’ve been able to spot more references in the past. I just can’t remember them now. :(

I do think this counts, more or less: The Tower of Sun and Moon card is surely a reference to different facebook games:

“The stories weren’t true. No vampires. No farms. No inexplicable fashions for spiked hair.”

Different Facebook games would make sense! Whenever I read the line about spiked hair I think about Cloud from Final Fantasy VII, but I’m pretty sure nobody was going for that and I’m just strange. :P

If you look closely at the Old London Street Sign picture, you’ll see it says &quotHobbs Lane SW1&quot. This is a reference to &quotQuatermass and the Pit&quot, which starts with the discovery of a Martian space ship during building work in (fictional) Hobbs Lane, which in the story can be found in Knightsbridge. 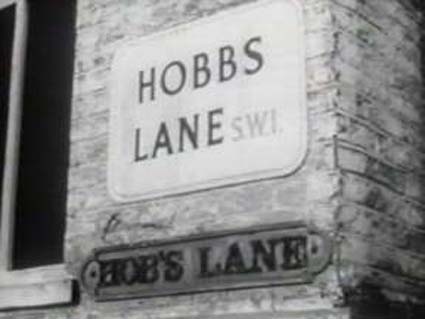 That picture is from the original 1958 version and matches the Fallen London postcode. The later film version relocated Hobbs Lane to W10.
edited by Polycarp on 12/20/2014

“All shall be well and all manner of thing shall be well”, my favourite FL and SS reference, is also Eliot: from Little Gidding, the climax of the Four Quartets, in its turn quoting 14th C Lady Julian of Norwich. And I’m sure this is nothing to do with Seeking, but very nearby is the line “Love is the unfamiliar Name”…

(Hyperlinking doesn’t appear to be working for me, sorry about that.)

Another one: Getting unlucky on the libraryette for Mr Pages card yields a storylet entitled &quotApril is the cruelest month&quot. (also T.S Eliot)

Also, from the sidebar text, on the subject of The Vake: &quotThey say it’s not a monster at all. It’s a man who dresses up as a bat. To, ah, prowl the city by night. But that would just be stupid.&quot

Another storylet, this time from Stealing Paintings From The Topsy King, involves the player and ropes. It is entitled &quotLike a spider-y sort of man&quot

Okay, so the trains in the UK were a nightmare today. With nothing better to do, I decided to read Eliot’s The Waste Land again, and I came across another little snippet. Compare:

The awful daring of a moment’s surrender
Which an age of prudence can never retract
(it’s in the ‘What the Thunder Said’ section, lines 403-404)

With:
The awful daring of a moment’s supposition which an age of ignorance can never deny.
(Description text of the Dreadful Surmise)

The Glassman’s weekly reward is titled, “A Bringer of New Things,” which is a snippet from Tennyson’s “Ulysses.”

I recently found some Clay Men connections at Mahogany Hall that I would have missed had I not been poking around in Greek mythology, as one does. Hopefully they’re not too obvious to merit mentioning.

I think many people are familiar with Pygmalion and Galatea (a hit production at Mahogany Hall, as we’re told, hilariously followed by a fate-locked storyline with obvious My Fair Lady roots) but, interestingly enough, the Clay Men associated with the ‘Provide master-classes in etiquette’ storylines have another link to the mythological sculpture come to life.

Polyphemus (sound familiar?) AKA the cyclops who Odysseus stabs in the eye, is also associated with a now lost play by Philoxenus of Cythera, where Polyphemus falls in love with Galatea, but she prefers a human lover over him. There are some overtones of the sad fate of the Comtessa in these myths too, I think.
edited by baudelairean on 12/30/2014

There may be, in the easiest Lost Quarter expedition, a reference to Sir Richard Fanshawe’s translation of The Faithful Shepherd http://en.wikipedia.org/wiki/Il_pastor_fido.

If you choose the Seal of the Hooded Hawk, some touching love stories are among the recovered loot. Guarini’s play is very much one of those. Fanshawe’s translation contains this:

See him laugh’d at! See him baffeld!
As a hooded hawk or owl,
With light blinded, when the fowl
With their armies flock about her,
Some to beat and some to flout her…

Bit of a stretch but it’s a lovely play and I have seen more obscure references around.
edited by Polycarp on 1/5/2015

I noticed a clear reference to Yeats’ The Cloths of Heaven in Penstock’s Wicket today.
&quotTread softly,&quot he says, &quotfor you tread in her dreams.&quot

The death option says: “Go gently into that good night”, a reference to Dylan Thomas’s poem.
The experienced zailing Fate option says “I’ll be in my bunk.” I think people can tell where that’s from.

call me an ignoramous, but this is the first time i read that the &quotmasters&quot were a very literal plot device.

thanks, FL. made me giggle a bit.

treichle> that quote is often used in western comics too. it’s a really pretty and heartwarming poem. but somehow literature majors i met online don’t seem to read dylan. or borges it seems. they’re missing out.
edited by rebelanarch-82 on 1/22/2015

[color=rgb(255, 255, 255)]The present life of man, O king, seems to me like to the swift flight of a sparrow through the room wherein you sit at supper in winter, with your commanders and ministers, and a good fire in the midst, whilst the storms of rain and snow prevail abroad; the sparrow, I say, flying in at one door, and immediately out at another, whilst he is within, is safe from the wintry storm; but after a short space of fair weather, he immediately vanishes out of your sight, into the dark winter from which he had emerged.[/color]

That’s the Noman text. It’s from the Venerable Bede, and it’s a paraphrase of some of the advice given to a British king about converting to Christianity. what it’s missing:

&quot So this life of man appears for a short space, but of what went before, or what is to follow, we are utterly ignorant. If, therefore, this new doctrine contains something more certain, it seems justly to deserve to be followed.&quot

also the Honey-Addled Detective is Sherlock Holmes, and I venture to guess that the Implacable Detective is Miss Marple.

She won’t literally be Miss Marple, on account of A: she’s black, and B: she’s rather too old. Even if Marple were improbably ancient by the time of the Murder at the Vicarage, she can’t have been the Implacable Detective’s age nearly forty years earlier. That said, the essential thread of influence is surely very strong.

(Also, this gives me an opportunity to play the game of Which Detectives Are Fictional In Other Detectives’ Universes? For instance, the Holmes canon establishes Dupin as a fictional character. Fallen London references both Dupin and Holmes obliquely, suggesting that both are real. I’m not sure, but I think that Poirot references Holmes as fictional. Poirot and Marple share a universe. Lord Peter Wimsey references Dupin and Holmes as fictional, and also Jeeves and Wooster. Amelia Peabody references Holmes as fictional, but also (confusingly) features real Baskervilles, and shares a newspaper with Lord Peter Wimsey. And if Fallen London featured anyone from Wimsey or Peabody, I’d be so excited, I’d do a backflip into my hat.)

Who says Miss Marple can’t be black? only your imagination. although quintessential Marple would probably be in her 30s circa the 1890s, it’s true.

Arsene Lupin and Holmes are in the same universe, I think, so that’s a possibility.

…are there any clues on who the Once-Dashing Smuggler is?