Has anyone seen this man? Perhaps we all have, and just didn’t notice. 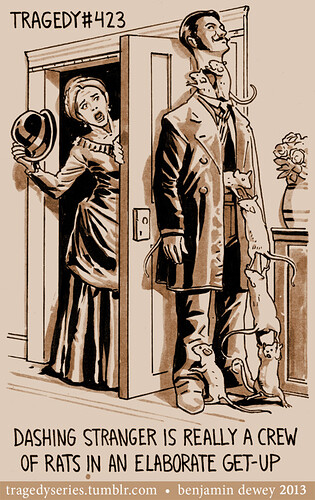 Yes, that blog is full of things of a similar nature.
I figured it would belong right above Fallen London. :)
edited by Gillsing on 10/6/2013

oh no my greatest secret has been revealed to the masses

oh no my greatest secret has been revealed to the masses

What if they arent actually dead rats, only sleeping ones. What then??? What implications does that raise?

Reminds me a bit of Sideways Stories from Wayside School. One particularly unpleasant new student turns out to be a dead rat wearing dozens of smelly raincoats… It’s a pretty odd childrens’ book series.

By now, the gentleman must surely be enormous! a certain number of thousands of rats all stuffed into a standard double-breast? The sartorial scandal!

They come, they go, through the city and through the post, but the rats are ALL Spacemarine9.

[quote=Sir Frederick Tanah-Chook]They come, they go, through the city and through the post, but the rats are ALL Spacemarine9.[/quote] The dead rats are merely ones he has shed, as a human sheds old skin.