Privy at the Bazaar

I shudder to imagine what Mr. Crapper would offer to Mr. Sacks.

Or do you mean Ambition: Enema?

Everybody posting to this thread has lost 10 CP Persuasive and gained 5 CP Scandal. Those reading it have gained 2 CP Scandal.

Thank goodness that the Tomb-Colonists are capable of defending their bandages otherwise things can get quite ugly when the posters come to visit bearing chamberpots.

Everybody posting to this thread has lost 10 CP Persuasive and gained 5 CP Scandal. Those reading it have gained 2 CP Scandal.

And everyone reading and posting has lost 10 points of Sanity. Hmmm… There’s a thought–for another thread.

I’d always assumed such matters in the Neath were handled by a Harry King-like figure a-la Discworld. People are paid to take it away, and are paid in turn for the stuff by tanneries and such. And given the sort of creatures that have to be processed into saleable goods, you gotta think that a lot of unsavory stuff would be gone through. Plus, the mushroom farms need to get their nutrients from somewhere, right?

This makes me wonder how the Topsy King and the other denizens of the Flit relieve themselves… They’re certainly not the paragon of cleanliness.

Hold on, hold on. We might be concerned about the Bazaar and all of the upper-class waste products up there, but it’s safe to say that all those stuff are somehow going to mingle with their plebeian counterparts and end up in the Stolen River, right? So they’re literally going to Hell?

Now we know where the fuel for all those blazing flowers came from. Also, despite that one failed invasion, it’s good to know that we’re getting back at those devils in one way or another, every single day. 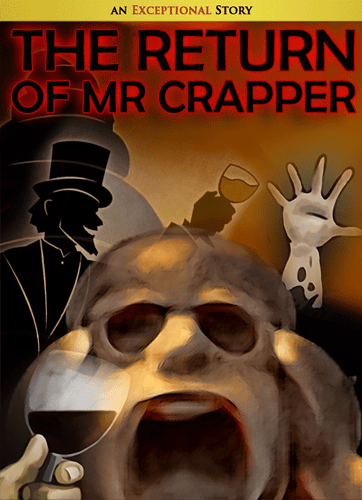 Yes, because what Londoners really need is another way to stain our souls.

I would pay Fate for this as well and I am ashamed of myself.

This makes me wonder how the Topsy King and the other denizens of the Flit relieve themselves… They’re certainly not the paragon of cleanliness.

In this regard, the Flit is a perfect model of the society at large: those above **** on those down below.

If I may point outside of the forums…

I just watched this rather lively discussion of misasma theory that just happens to include some discussion of the sewer system of london.

Now, that isn’t to say that the fall did no damage. Out at the edges perhaps there is a harry king, and some people smart enough and lucky enough to have a pot to **** in as well.

I also suspect we’re still in the era of having to pump water up and carry it by hand or by clay. So water is poured down on top until it’s washed away out of the bowl.

So, somebody in the spire would ring a bell (NOT THAT BELL) and a servant would show up with a bucket to clean the bowl.

My sides have transcended known reality and are now up NORTH.

Can we get a Kickstarter for this?

My sides have transcended known reality and are now up NORTH.

Can we get a Kickstarter for this?[/quote]

Forget the Kickstarter, I’d offer my left arm for this! And a good heaping of FATE.

[i]A dank and cloying miasma has ascended onto the streets of London.

Wheezing rats collapse in the gutters of Spite while bats desperately cling to the stalactites above. Perfumes and incense have long sold out and the Masters are nowhere to be seen. The Bazaar is sickly quiet.

Pinch your nose and choke through abandoned alleys in this unanticipated and unwanted Unexceptional Story. Hunt for Mr. C******'s upended manhole. Explore the depths of London’s sewers in greater detail than anyone should want. STAIN YOUR SOUL.[/i]

Unexceptional Friends can enjoy many benefits such as:

At the end of the month we will discontinue this Unexceptional Story and never speak of it again.
edited by Blaine Davidson on 12/22/2015

Mr. Cups: Not on the china. Good grief NOT ON THE CHINA!

Mr. Fires: Maybe a new city isn’t a bad idea after all.

Mr. Hearts: I’ll ask the good Bishop if he can prepare a creature that can take care of this smell.

Mr. Iron: [We are not speaking of this content again. Mr. Pages must explain himself]

Mr. Pages: what a catastrophic calamitous cr****r! I must fortify my abode posthaste!

Mr. Sacks: We are now considering the virtue of giving rather than taking.

Mr. Spices: That golden liquid wasn’t honey, was it?

Mr. Stones: NOT MINE!

Mr. Veils: (not available for comment. However, there are several sightings of the Vake repeatedly headbutting the cavern’s roof.)

Mr. Wines: (Not available for comment. Seems to be out of the zee and having one of his revels.)

MR. EATEN: I should probably postpone the reckoning…

[i]&quotThe Bazaar has been feasting on Tomb-Cockroaches that has fallen into the Sundered Sea. It only makes her more constipated, and that’s worse for all of us… but especially those who love her.&quot

[/i] Its eyes are bright. &quotI’m pissborn,&quot it says, &quotThere are no worse things you could have showed to the Dragons. Excrement, [i]hurtling forever towards the earth. A love which failed, and a fall into chamberpot. It tells, too, of the stink to High Wilderness. I felt sorry for the Bazaar.&quot

A scream rips the night behind you. The Pooman is grappling with a hunched figure. In the orange gaslights you see the figure raising a sign not unlike those held by a Union worker on strike, but in Mr Irons’ handwriting: &quot[/i][i]YOU WILL MAKE THE WORK ENVIRONMENT OR THEY WILL BE MADE FOR YOU.&quot

[/i]Go beyond the Sundered Sea and mount an expedition to the Bazaar’s privy! The most dirty secret of the Neath are open to you. Take on the new menace of Tomb-Cockroaches, whose unnatural vitality render them immune to squashing. Revisit Theological Husbandry, and create a new creature that will topples the balance of power of the known world, or even postpone the reckoning… indefinitely.

Dear god, I cannot believe I’m replying to this. Sigh.

CRAPBOUND!
Clear the path yourself?..

[quote=Gonen]Dear god, I cannot believe I’m replying to this. Sigh.

Until further notice, I AM NOT accepting invitations to a private supper from any posters in this thread.