Has anybody else been experiencing this? I play on a google Chromebook, so it can’t be that my OS is infected with any kind of malware, but ever since disabling AdBlocker for the site, I’ve been getting ad-pages opening a separate tab just about every time I sign in, or when I click an op card or my messages tab when I reopen the tab after a few hours break or whatever. It seems particularly galling that the scoundrels reference storynexus directly, as I’m sure our gracious hosts have nothing to do with this! 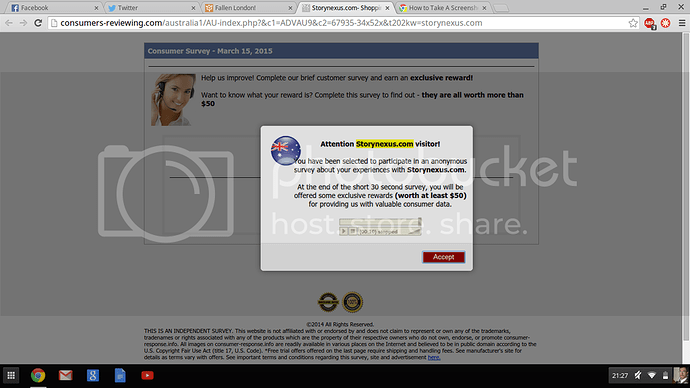 hullo!
I’ve never had adblocker on my computer (PC, not chromebook, though) - and I’ve tested Firefox, Chrome and IE. None have this.

Looks like it’s definitely something your end. Chromebooks are secure, but not immune (says google, I have no knowledge myself). Seen this thread?: Google Product Forums

This pop-up ads do look like malware on a computer, someone on that thread just mentioned them having it.
edited by Estelle Knoht on 3/15/2015

Thankyou both for that. Just cleared all sync data as the thread suggested, so we’ll see if that does it.

EDITED TO ADD: So far so good. That seems to have cleared it up entirely. A number of the commenters on those threads stressed that this was a bit of a nuclear option, if anybody else here finds themselves in a similar situation. But having done it, I can’t really spot any unwanted blow-back or side effects.
edited by AmouryDeDomremy on 3/15/2015