[color=rgb(0, 102, 255)]We’re looking for around 100 people to take part in the beta who use a variety of browsers and operating systems. We are particularly interested to hear from players who use a screen reader to access Fallen London, so if you know anyone who meets that description, please pass this on to them!

I don’t think I will be signing up for the beta, but this looks magnificent delicious friend (is that st dunstiens next to the carnival?)
edited by the old man on 1/27/2020

In case people missed it, another portion of the new map was also previously teased on Twitter. 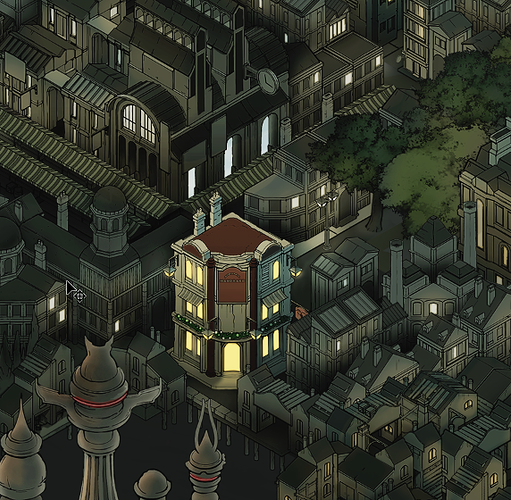 [color=#0066ff]Invites have been sent out to the first 50 people who applied to the beta! We can’t wait to hear what you think.[/color]

Feedback: There seems to be an issue with lag, as it takes a significant amount of time to log in with an account and to travel across the map when compared with the current version.

It also appears that in order to travel, you need to zoom in on the map and press on the place you want to go. A variety of places are now considered separate from each other: places like the Singing Mandrake, the Empress’s Court, Moloch Street, the Clay Quarters, and so on can now be traveled directly from the map. Curiously enough, I even see an option for routes such as Flute Street and the Temple Club in the mix.

In addition, it appears that all of the Lodgings options have been split into three different icons / sections at the bottom of the map: &quotYour Social Engagements&quot, &quotYour Activities&quot, and &quotLodgings.&quot I understand enough that the social engagements are explicitly for social actions for other players, but I am not sure what the activities and lodging sections are for. An interesting choice, to be sure.

I think it will take some time for older players to adjust to this format, but it is really fun to see all of the different areas of Fallen London in a new light. Keep up the good work!

After checking, it seems that you still need an action - at least for the beta - to access the Empress’s Court, despite it being listed as a separate area on the map. It’s possible that with after the beta is finished, the need to spend an action may be removed.

I sent you an email last night, but compared to the posts on the forum, the email cannot be modified and added some new ideas, so I decided to post the same content here and add some new ideas.

I have to say that this is really an amazing new map, wow. This map is not only beautiful, it also feels novel in some details.
So let’s talk about some of my feelings,

Have these problems so far
These issues were discovered using &quotChrome 75.0.3770.142&quot

I hope: maybe we should keep a button for switching between old and new maps, and provide it to users who have less than ideal network speed or computer equipment.

Some thoughts on the map (not important):
At first glance, Watchmaker’s Hill is not reminiscent of a mountain. I was poisoned by Google’s automatic translator! Hahaha, Google used to tell me that there was a mountain there. So when I saw it on the map of the original scale, my reaction was:? ? ? ? ? Such a flat place, you tell me this is a mountain!
This may be limited by scale and artistic style.
But when I reduced the scale, I saw a hill
Generally speaking, there is no problem, after all, it is just a hill.

There is more to explore, but I am going to bed, and I look forward to my new discoveries tomorrow.

In addition, I made a mistake. The email address I left when I applied for the test qualification is the most commonly used one. I hope to send a letter to this address so that I can receive the information in time. This mailbox is also the address of my character kacher, so it is not a new character but my old friend entered the new London.

Some thoughts on the map today (not important)
I thought &quotWilmot’s End&quot had a lot of statues. From the text description, I even thought of a cemetery with many broken statues. One of the statues had an institution will open the road to &quot the foreign office &quot. But I only saw a small garden and a chic small building on the map.
Of course, it is possible that I misunderstood the text description. Anyway, I ask this question.
edited by chiche on 2/4/2020

There are an awful lot of trees for an underground city.

loredeluxe[/b]]There are an awful lot of trees for an underground city.

I’ll point you to these new sidebar snippets again…

[quote=loredeluxe]There are an awful lot of trees for an underground city.

I’ll point you to these new sidebar snippets again…[/quote]
I can’t speak for anyone else, but when I read those new snippets I was expecting only a few still-living trees in London. To have so many living trees everywhere on the new map feels like a bit of a retcon when:
a. Just about all mentions of trees in previous storylets made a point of mentioning that they were dead husks.
b. Mutton island had been stated as being unusual for having trees that were still alive.

I don’t personally see sidebar snippets of all things as being proper justification for what is essentially retconning. Fallen London is a game that lives and dies by its extensive, detailed, and unique setting. Would it be that much trouble to just change them to mushrooms?

Hardly a retcon - there have always been trees. And bushes, and flowers. Some of them surface varieties, noticeably struggling. Some of them Neathy plants - usually causing struggles for others.

What affect do the sub-areas have on location-specific Opportunity Cards? Like, if I’m at Moloch Street instead of Ladybones proper, can I still draw that one card that nets me a Great Game favor for trading brass?

I moved from Spite to newly acquired Lodgings

The other locations in the city display my character portrait to indicate my presence in the region. The Lodgings and Calendar locations are displaying a random portrait. It is always the same incorrect portrait.

I’ve only been playing the beta for a few days now. The performance on my laptop is good but it could be better optimized for my smartphone, though the worst I’ve encountered on my phone is input lag, high latency, and the occasional page crash, problems I believe Failbetter is already aware of. I just want to record my impressions and experiences with this map. My thoughts and suggestions will be divided into good, neutral, and bad.

The Neutral (I can take it or leave it)

The Bad (and how I would fix it)

Advantages to increasing the map’s size.

To summarize my feelings on the new map, I think it’s wonderful that Failbetter is making a more detailed map, but the map absolutely needs to be bigger in order to accommodate this increased level of detail. This new map has tremendous potential and I would be delighted to see it fully realized.
edited by SGTLemon on 2/12/2020

And can we be sure that the Masters won’t be moving things around during the downtime?