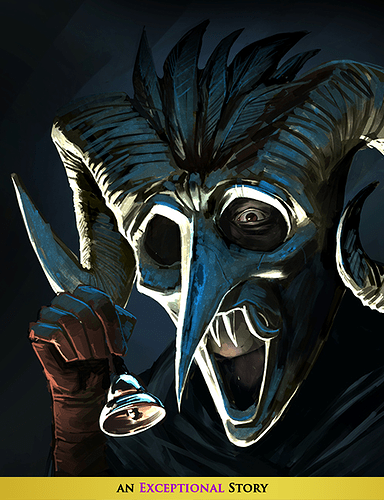 Aw, I unlocked the story in The Season of Celebrations, but now the option to answer the door to the urchins disappeared. :(

The epilogue doesn’t seem to actually have any options on it.

The Ministry of Public Decency apparently does not know their limits of being able to make things unfun.

I mean… bonfires? Fireworks? They honestly expect to be able to control this?

The epilogue doesn’t seem to actually have any options on it.

I haven’t quite finished the story yet-- though I’ve seen the Main Event-- but I have to say, this is the most fun I’ve had with an ES in months. There was a real thrill of anticipation for me, knowing what was going to happen and getting to decide how to play it all out (though that wasn’t much of a decision for my devout Revolutionary) . I suppose there’s a lot of locked-in dialogue and only the one decision, really, at least to this point, but anticipating the choice and its results made every new bit of information delicious-- and there’s still so many little comments whose fit into the story I’m very curious about!, While there may not be the same levels of deep lore that some stories have brought, getting to meet and talk with so many Londoners is at least as fun for me and my character. It’s been great to have an ES where my character can sort of kick back and just enjoy the company of fellow Londoners.

-also, that art of the mask is amazing!

Ι suspect the brass box is an awful thing for London… and I humbly ask for a spoiler, from anyone who chose to aid the revolutionaries from the start. Thank you in advance!

I like what you did with the title of this thread. It really is her story more so than ours.

While I certainly enjoyed this story, I found myself locked into supporting the Revolutionaries, due to a misunderstanding about what they were doing a side entrance. My character who otherwise loathes the Revolution, must have been taken in by the pandemonium and decided to join in wholeheartedly!

Lovely story, but will probably reset it once the option is available.

Yeah, I’m likely to reset as soon as possible. Your average revolutionaries are great, but I was hoping they could have a story without what was in the box. But hey ho.

Really enjoyed the initial bits of this, wandering around the festival, seeing both devils and regular families at play. In the end that section was pretty static, of course, but I liked the sense of build-up running through it.

For those curious, in the end I played both sides, to the extent that was possible. [spoiler]I stopped the fireworks, somewhat to my regret, but left the effigy in tact, also somewhat to my regret. I closed the box and helped the Ministry, but turned my info to the, ahem, ‘Purple-Clad Revolutionary’ and defended her from the crowd.

In the end I got a message confused at my alliance with the Constables, but nonetheless thanking me for ensuring the Spectacle was a spectacle, which came with a Night-Whisper.

I got a message from the Minister, rather concerned about what he had found out about the whole ordeal.

And I got a message from a month, grateful for ‘a kindness’.[/spoiler]

I suppose there is no ending where the Minister is actually happy and pushing for a Second Bonfire? A shame.
edited by Lavaeolus on 10/26/2018

This story only strengthened my inherent dislike for the Revolutionaries in general. Hell, even the Ministry of Public Decency is trying to spread some fun with a Bonfire Festival (that doesn’t involve burning censored material) and the moment they do, someone has to ruin the fun. This is why we can’t have nice things, because there will always be some idiot that will try to ruin it with politics.

I can understand why the Minister is so deadset on getting the fireworks and the unapproved effigy. The Masters and the Traitor Empress both hate, to the point of obsession, loud noises. Having a ton of fireworks go off at once would probably cause a lot more damage, not because of the fire that will spread, but what the leading powers of London would do to anything in their path. I didn’t initially know who would be the effigy since I called the cops on them, but I had a good guess and it turned out correct. Very rude, even for Revolutionaries.

I swear on my 50+ Sanguine Ribbons and my Renown 50 for Revolutionaries that November will rue the day she challenged me. Prison would be a mercy compared to what happens to those that crash my parties.

My only real regret in this story is letting the Revolutionaries burn their effigy. I feel so awful after I found out who it was. I do not regret the fireworks at all. I sided with the constables all the way through, except I helped her get away in the end.

There are just a few observations I made with attached questions.

[spoiler]3) In regards to the Revolutionaries, is this the first time we’ve ever seen November? I recall at least half the other members of the Calender Council, but I can’t quite recall if I’ve ever seen mention of November in any other story.

I’ve come to the point in the story in which the parade is making its way inside. After showing the Parade a side entrance, I chose all the side options before coming down to a choice of diverting the parade and holding off the constables. From what I understand, this is not the last chance I have to flip-flop between sides. Can anyone specify what happens with each outcome, and what ending (if any) is most ideal for November? I’ve grown something of a soft spot for her and the general revolutionaries, so knowing what the bloody hell is going on would be nice.

Does anyone have an echo to the Autumn Room from the Calendar Code? I’m curious about what it stated about November now that she is finally introduced.

So how many other Calendar Council members are still in hiding? September, October, and December?

Just wanted to drop by to say I hope we will see more from this writer in the future, and that art is my new favorite from Tobias. Much personality here both in the writing and art.

And re: November in the Calendar Code:

I don’t have an echo handy right now, but her book was blank, iirc.

Lovely story. I’m replaying it in the future, as I didn’t really get the ending I wanted, but kudos to the writer.

Terrific story. One of my favorites. And, once again, my problem with authority figures has lead me to some questionable associations.

I really liked this. I certainly should have known better than to help the Revolutionaries, given what I know their end goal to be, but this story did a good job of leading me down that road. I’d stand by every choice my character made, but I think I’ll replay it when I can and just try to keep things fun without becoming ominous.