November Exceptional Story: A Devil's Due 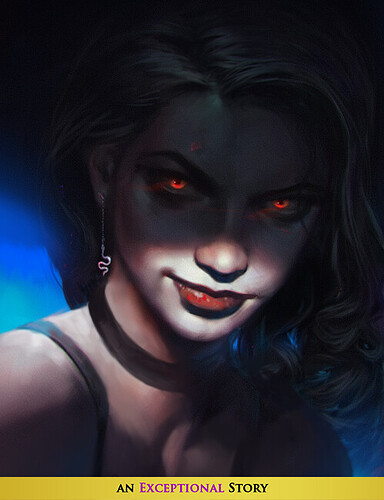 “All Devils are beautiful, in their own ways; even the ones that don’t remotely resemble people. But this one is beautiful in the specific way that a Renaissance marble is beautiful: something hard and eternal impersonating something pliable and fleeting.”

Verity is on the hunt for a particular soul, and she won’t take ‘no’ for an answer! Consort with devils high and low as you track the Lyrical Soul through infernal society, strike bargains in a primordial currency of Hell, and uncover an ancient story of love and loss.

Now this sounds like one Hell of an ES!

EDIT: Wait, I just saw that Bruno is the author of this one, neat! More reasons to clean my ES backlog.

Ah, a new Exceptional Story that releases during a Festival. I suppose I’ll do what I usually do and wait until afterwards.

… on second glance, that seems rather unlikely this time.

Also I just checked the “trailer” content that Exceptional Subscribers don’t see, and I am extremely disappointed that I’m missing out on it.

Honestly, I am unimpressed. It’s my second exceptional story, and it seems mediocre at best. Especially in comparison with the story of the previous month.

I’m a little sad I can’t show the Numismatrix the rusted coins. I rely on her for fun coin facts and honestly I was rather excited to know what coin history Hell had. I’m sure it’ll come up in the course of the story, but I’m holding on till after hallowmas (and totally not out of an irrational fear of devils).

So, a story about storytelling and the truth (Verity, ΑΛΗΘΕΙΑ): how much is love one or the other? That seems to be the theme, though lore-wise I wonder whether these strange coins appear anywhere else.

With regards to the deviless, I didn’t expect that she would turn out to be Eurydice, but apparently, all great love stories sooner or later lead back to the Bazaar. (This is, after all, the underworld.) The mythical figure died of a snake bite, so the snake earrings in the promotional image are presumably inspired by that; she’s also dressed in black, her footsteps are silent and she often appears in the shadows, as if she were a shadow herself. Interestingly, she is also described as “freshly molted; a nymph”: Eurydice was a nymph in Greek mythology, but νύμφη is also the Greek word for a pupa, the life-stage of some insects (like bees) before full maturation; the preceding stage of larva is called προνύμφη, “pre-nymph”.

At any rate, an interesting look at Abstraction.

I loved this one. I love any that allow me to leverage my unhealthy closeness with the Devils and the Brass Embassy. I’d love more content with my frenemy Virginia. Which is coming in Mask of the Rose I hear.

I loved everything about this one. The lore glimpses, the Greek mythology, the different personalities of the Devils, one of my favourite NPCs (Crimson Captain), and not least that the film noir vibe which was introduced by the art was carried on throughout. If I had to come up with a tag I’d call it a highbrow hardboiled detective story. Very old school - which I like.

so, without spoiling too much, i’d like your help:

I died and verity escaped because i let her shot me

it felt like a very short ES comparatively, and I’m thinking if i should replay it and see if another ending is possible.

I’m pretty sure I missed something important. I got the two initial stories and truths and reported then to the devilless, but now I’m at a loss as to where to search for my third interviewee. Any tips for a friend that might have lost the thread of Ariadne and does not know where to keep searching for this most searched of soul?

I talked Verity down and she left without killing me, but also without paying me, since I’d chosen a couple of “disloyal” options during the interrogations (although imo I never really betrayed her). The Crimson Captain gave me a Discordant Soul as compensation and that was it.

I liked the story alright, but the ending felt very sudden. I would be curious if someone who was more completely loyal or completely disloyal got anything especially interesting out of it, either in terms of material rewards or text. Of course, what I’d really like to know is if there’s any way you can walk away with the Lyrical Soul youself.

He’s at the Blind Helmsman! I also got briefly thrown off.

Thanks a lot! I was completely lost in my searches!

It was quite short (~40 actions usually isn’t enough) and it all felt very linear without much interaction. I do like hanging out with Devils, though, and enjoyed it as a story.

Just loved it. For my current mood, the right measure of story vs roleplay.

I liked this month’s story alot, despite it being a shorter one. It took a second to figure out the tie in to greek mythology but I enjoyed it. Short but sweet and it shows that Devils can have a sentimental side. I may be influenced by the amount of times I’ve listened to the Hadestown soundtrack though.

And I somehow forgot again to play the free trailer with my alt and I ended up having only the Wiki text. Do you happen to have more/all of the echoes?