[color=#cc0099]Delicious friends, the Exceptional Story for May is here! 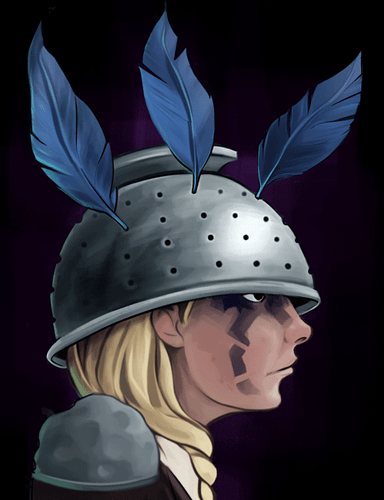 London’s street musicians sing of a child Valkyrie, who roams the winding streets with her broom-spear, setting right the wrongs of the world. Join her crusade and mentor the abandoned children she has taken under her wing. But take heed: she has declared herself against a singularly dangerous enemy - Mister Songbird, the whistler in the night.

HOJOTOHO! is the third and final story in the Season of Stones, and was written by Cash Decuir. This Season involves three linked stories delving into the hardships and injustices at the heart of London. Players will be able begin each story from the Season of Stones card.

At the end of the season, players who played all three will unlock bonus content allowing them to address – or profit from – London’s inequity.

Finishing all three stories in the Season of Stones will make you eligible for an additional opportunity, to follow.

I think this is one of my favorite ES! I liked each character you went on an adventure with, especially the trickster. I felt he was fleshed out more than the average npc.

And as Robin Stated, The Songbird looks absolutely amazing!

I knew from the minute I met the Valkyrie and saw the name of the urchin’s home that I’d love this story, and I did. The characters, like suinicide said, were distinct and well fleshed out (and adorable) and quite to the contrary (sorry Robin) I felt extremely invested in keeping these lil tykes safe - I thought the writing did a fantastic job of making me care & feel protective for the fierce little band of warriors.

I was also extremely pleased to see each quest section using different mechanics - it kept things feeling fresh in a way that would have been lost with, say, overuse of the detective case carousel. I do agree that the &quotThis may take a while&quot warning was a little odd given that almost all of the content behind it was 0-action conversation stuff. I used coffee as well, which ended up being entirely unnecessary.

Gorgeous art, fierce precious little urchins, a story that strikes a great balance between being important and being personal, many chances to play hunt-the-reference: I’m a big fan.
edited by Barselaar on 4/27/2017

Another great story! I’ve been rather busy and not posted by thoughts in full, but these last two have been amazing.

I started playing the exceptional stories in August last year. I think so far (the gallery and the sorrow spiders sorted, about to deal with the marsh-wolf) this has been one of my favourites. I plan to write more once I’m finished, but I’m out of actions for now, and I want to gush a bit; if it gets better, I want to be able to emphasise that, and if I start enjoying it less, I want to be able to contrast that with my initial thoughts.

Edit: Yeah, I absolutely adored the characters. The plot itself didn’t seem hugely stand-out, but the way the Nobodies were written was great. I just wish I’d get to see more of them.
edited by Mercury on 4/27/2017

…why couldn’t I adopt THE VALKYRIE as my daughter instead of that treacherous shadow?!

Seriously, Don Quixote orphan gang is best orphan gang. For a long, long time I thought “Mr. Songbird” was the Vake. I still hope I can recruit these guys for the bombing to help me blow up the Vake somehow at the tail end of bagging a legend.

So, I chose to encourage her to stay with her friends, and I liked the result.

Two things, I didn’t get any special item like I have with previous stories (Did get a 60.00E item, but it’s a rather common one), and it told me that “London will be different for your actions”. Does that mean there’s going to be a permanent change, like an opportunity card, or different options going forward?

There is a new option on an opportunity card.

I assume it is Urchin card? That aside, what a way to end the Season! Due to financial reasons, I will have to cancel the Exceptional Friendship for time being, but I am glad that I got to play this one! It had such a lovely array of characters, with motives that are truly idealistic, which is something you rarely see in Fallen London. It is truly a breath of fresh air! And mechanic was fun, too. I think hunting for Wolf was my favourite part of this one, definitely.

I have to say, I loved this story. Small stories about making a difference make me very very very happy. And I love the Urchins, so put those all together and I’m a happy camper today. I also got the “London will be different for your actions” result and I can’t wait to see what is different.

Also, why can’t I adopt all of these Urchins? Or like… help them out continuously somehow. Give them a house? I have a bunch of extra houses they could have! I just want to take care of an entire gang of law-breaking children.

For a change, this story is actually good.
And conversations with 0 actions cost is very appreciated.

Dirae Erinyes is proud of their work today - saving london one crazy urchin gang at a time.

I honestly loved this one - once again the focus on the ordinary lives of people in this setting really won it for me, along with it being more lighthearted compared to previous stories. Excellent work.

I usually haven’t cared much for the Exceptional Stories (Except the 12:15 from Moloch Street, and the one about the Wind).

…I really, really loved this one.

I imagined that the now-jaded Alice started talking to the Valkyrie, and felt inspired by her courage. She couldn’t help but encourage those kids!

A fun and interesting story! I love how detailed and well-developed the characters were. My only quibble is that I wish there were multiple possible resolutions to the ‘quests.’ I would have loved to have smuggled the Thing back home in a box, or convinced the innkeeper to throw in his lot with the spiders.[li]
Also, was Mister Songbird supposed to look like the Phantom of the Paradise? Because he really does, and it’s amazing.

I disagree with being uninvested in the plot as my character has gained a tendency to take on motherly traits especially with urchins. Which lean towards safer and more secure life choices. I have an Orphanage for goodness sakes, how much safer can a child be than under the watchful eyes of myself and my staff?

And yet, come the final decision I couldn’t bring myself to push her to the &quotsafe&quot option. A small band of do-gooders not unlike myself? I couldn’t break that up!

Each individual quest was unique with the individual characteristics of every urchin shining through. Though I admit, I wish the moral choices given at the end of each had some consequences.

Easily my favourite Exceptional Story of this batch. I only wish I could provide more aid to the group, physically or financially.
edited by Blaine Davidson on 4/27/2017

Loved this story! I agree with the desire to have sees the moral quandary choices come to a head at some point.

Other than that, I did not get misty-eyed at the end (“Hojohoto!”). Definitely no desire to shed tears here. Nope.

HOJOTOHO was a fun story with game mechanics that were easy to follow. I was grateful for the conversation arcs that didn’t consume actions, as it made them seem more casual, as one would feel if they were talking freely.

In terms of the narrative, I loved the characters and the story tie-in with some existing lore in an unlockable place I won’t spoil. However, I do feel the story was stretched a bit thin at times to cover this larger ensemble cast. The smaller tasks were fun to engage in, but it did give me the impression that I was mechanically sampling each character rather than learning how they contributed to the overarching plot. I think if this story would benefit from either being elaborated over several Exceptional Stories or condensed so as to narrow its focus upon less people. Consider the Chimney Pot Wars, which was July’s ES featuring an enormous cast of urchins. Despite the large number of people, the story avoided overcrowding by hemming itself into a unified plot that elaborated upon only a select number of characters.

Regardless, HOJOTOHO was a delightful look into some of my favorite people in the Neath, and even included one of my absolute favorite story options: an opportunity for my character to purchase edible goods.
edited by Art Shrival on 4/27/2017

Loved it, loved the Wagnerian connection, the characters, the vigils, the idea of a grown up dragging her skirts along the roofs with Quixotic urchins. I chose to let them all stay together and make London a better place, of course. Still haven’t gotten a card to show how things changed, though. Is it a new card or a new option on a card?
edited by Jolanda Swan on 4/28/2017

So uh… did anyone take the other ending? I’m really curious what the results of that choice were.

Greetings. I chose the songbird ending and wanted to ask if anyone has found where, or if at all, there is something like the new option on the urchin card for the other Ending. Couldn’t find anything on the great game, and don’t have access to the Foreign Office itself yet.