[color=#cc0099]Delicious friends, the Exceptional Story for March is here! 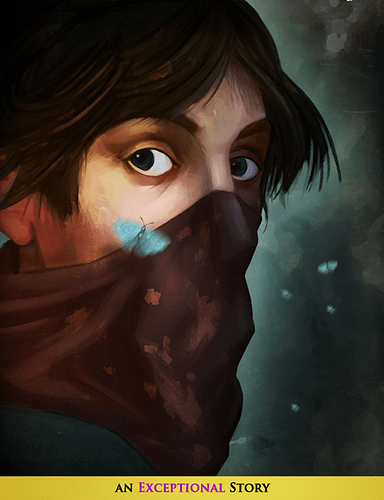 A rogue artist has been spreading incandescent graffiti. Join a secret society in pursuit of the mysterious vandal and help them chase down the culprit—if their own secrets don’t catch up to them first.

Finishing all three stories in the Season of Adorations will make you eligible for an additional opportunity, to follow.

But what about conclusion of previous season? Did i missed it somehow?
edited by Panzerrus on 2/22/2018
edited by Absintheuse on 2/22/2018

Oh hell yes Art Crime. I am on board.

[quote=Panzerrus]But what about conclusion of previous season? Did i missed it somehow?
edited by Panzerrus on 2/22/2018

Oh, thank you, i started to doubt myself.

I can’t find the ending anywhere, is it an opportunity card?

Warning: do not loot the pockets of the coat before you accept your reward, as it locks you out of getting the reward.

I’m not sure if my game goofed, or if someone forgot to add/remove something, but I just got this.

EDIT: The storylet is titled &quotIn Defense of Exaltation&quot. I don’t know if that helps.
edited by RageBoxAlice on 2/22/2018

I was really excited for this ES, as I’m a big fan of A House of Many Doors, and it did not disappoint! The Pursuit of Moths was a fantastic story and it’s definitely one where I’ll be interested to hear how it turned out in other paths.

Great story. A sad one for my character, but a fun one nonetheless.

In the end, my attempt to find an alternative to either turning the Vandal in or letting her destroy herself in sunlight led to the death of her father. After that I let her go, buying her comfortable tickets, on the condition she not burn the moths with her.

Reward was 5 Uncanny Incunabula, by the way, for anyone who’s interested. I think in this case that reward is universal, right?
edited by Lavaeolus on 2/22/2018

I really like that this story’s item is a piece of equipment. Having all the useless Curiosity items was a bit boring, so the variety is nice.

It’s a pity the Scoundrel has to die if you bring him along; I wouldn’t have invited him if I knew.

Is it weird that I only like this because you can grind RN by Feeding the Bats?

Hello! Finally decided to register on these forums so I could talk about the Exceptional Story.

Just wanted to say that I regretfully skipped one potential step as a character choice, and I think I deprived myself of a satisfying conclusion because of it.
/SPOILERS/ After my second meeting with the Vandal, I decided not to go back to the society and instead go straight to the docks to meet up with her. I felt like I had a bond with the Vandal after helping her with her art, and going to the society to tell those chuckleheads about her would feel like selling her out. So I made her take off her coat, paid for our tickets and took her to the surface. Unfortunately, that left me with a pretty unsatisfying ending for the Society, and it felt like all those characters ended up not getting a proper conclusion to their side of the story. I guess I just have myself to blame for that, but still, feels kinda bad, and I especially regret not helping her father now. /SPOILERS/

Can nobody in this society just say what they mean?!? I mean I can’t blame them individually but this is getting ridiculous.

Anyways, I very much liked this story, especially piecing together the Vandal’s backstory. I’m a bit sad I can’t keep this Greatcoat as a memento past the season conclusion, though.

It’s also interesting how everyone has a (mutually exclusive) agenda in this whole business. God forbid that someone just want to appreciate the art, though…

I loved this story, even with the horrible ending I got.

I took the Scoundrel/Snuffer with me, hoping for a renunion, or at least be able to convine the Vandal that she didn’t have to die. And then she attacked him, and I tried to intervene. Intervene! Not murder! And then she died, in a wharehouse. And then the Scoundrel left, and died as well according to the text. AND THEN I went back to the society, and recieved my &quot&quot&quot&quotreward&quot&quot&quot&quot for murdering the Vandal. It was a whole Flawed Diamond I tell you. Totally worth it. Definflty. Oh, of course the other part of the reward is the finding out that the Collecter’s collection is dead, stuffed, taxidermed people, which now includes the Vandal. Great. I feel great. Definitly glad with the choices I made. And I didn’t even get to stop/kill/otherwise destroy the Collecter and her ‘collection’ after finding out.

[quote=Optimatum]I really like that this story’s item is a piece of equipment. Having all the useless Curiosity items was a bit boring, so the variety is nice.
[/quote]

I also really enjoyed this story. (That said, I enjoy them all, so calibrate accordingly.) It felt a little shorter than usual, but I’m guessing that there are a lot of parallel paths depending on how you deal with the other members of the Society. I’ll come back to it when it reaches the Fate page.

Great story. The end made me tear up.

[spoiler]I like how everyone had their own agendas. That made picking who to “side” with a lot more fun.

Finding out that the reason the Vandal wanted to go topside wasn’t really to kill herself but so she could see sunlight for the first (and last) time was very sad. I did save her moths though, it’s not their fault they exist.[/spoiler]

It was a great story, but the epilogue where you see the Vandal’s journal has terrifying implications.

The Vandal was worshiping the Judgments and wanted to embrace their light. In her journal, she was keeping track of the stars and discovered they &quotwere not aligned&quot and further wrote out a message: &quotBlaze upon Blaze: War in Procinct.&quot I had to look up what procinct meant because Failbetter loves their obsolete words, and it means ready or prepared. My interpretation of that statement as with everything else in the journal is that the stars are prepared for war, but with who and what? That is a terrifying question.

I’m not going to click the spoiler, just in case, but just to confirm: is the epilogue an opportunity card?

I’m not going to click the spoiler, just in case, but just to confirm: is the epilogue an opportunity card?