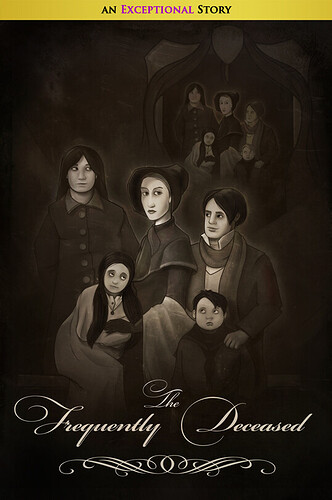 [color=#0066ff]
[/color]
A family of promising youngsters have killed their Governess again. This time, she hasn’t come back.

Question servants across London. The chief glass-cleaner at the House of Mirrors. The attendants at a honey-den. Your own staff. Keep the children distracted with Enthralling Tales and your least lethal pets.

The Frequently Deceased is the first story in the Family Ties season. Playing it and the two stories that follow will make you eligible for an additional opportunity.

&quotThe children of the Harassed Mother would welcome entertainment.&quot

And on that ominous note…

I love the premise :)

I haven’t read much IF but I know anything bearing Emily Short’s name is going to be great.

Has anybody tried giving the children the exquisite toy? I’m curious about the results but I’m not sure if it’ll survive.

I didn’t finish the story yet, but I can say this : I like the texts very much (so much that I’m trying to get all the possible texts), and I’m glad you have opportunies all around London !
edited by Emain Ablach on 2/25/2016

Speaking of getting all the possible texts, has anyone echoed the text from playing corsairs with the children? I was going to check out that option, but it disappeared on me.

I believe the corsairs (and prisoner for that matter) options are airs dependent. And yes, an exquisite toy can be received from the toymaker storyline from an opportunity card I believe.

I just tried the exquisite toy. I didn’t lose it- I’d assume none of options cost you anything except the ones that are marked as such- the beetles and the bedtime story. It seems like the others give you menaces, though- I got a point of scandal from the Exquisite toy.

But- the way the bed time story makes you choose something enthralling. Is that a new mechanic? I don’t recall seeing anything like that anywhere else. And I’m curious if different books get you different results- not willing to lose anything valuable to check, though.

[quote=Gilphon]
But- the way the bed time story makes you choose something enthralling. Is that a new mechanic? I don’t recall seeing anything like that anywhere else. And I’m curious if different books get you different results- not willing to lose anything valuable to check, though.[/quote]

I love it! Especially the children.

And I’m proud that this time, the Governess’ motivation didn’t have to be spelled out to me. I saw that one coming from a mile away.
It felt a bit like a good mystery novel, with all the necessary clues given to the reader before the great reveal.

And I’m curious if different books get you different results- not willing to lose anything valuable to check, though.

I tried it with a Tale of Terror and a Proscribed Material and it was the same.

It seems I’m the sort of person who would bring he hound of heaven FIRST… and then continue with deadlier and deadlier pets.

I echoed all the ones I could get, though I lack an exquisite toy so I couldn’t play with the children with it. There is also an option if you have a Watchful Doll that gives some interesting information.

Thank you for the information, Hannah!

Are these Exceptional Story Seasons going to be a regular thing, or is it just coincidence that we’ve had two sets of stories consecutively?

[quote=Gilphon]And I’m curious if different books get you different results- not willing to lose anything valuable to check, though.

I tried it with a Tale of Terror and a Proscribed Material and it was the same.[/quote]

I tried reading both collated research and a compromising document to the little horrors, and they gave the same (hilarious) response you can see in Ancient Drunkard’s journal in link below.

I am not going to risk my one intriguer’s compendium, and that’s only 4 ‘enthralling’ compared to 5 from the research anyway.

This was great. A lengthy chunk of mysteries with plenty to explore, and 0-ACTION DIALOGUE HALLELUJAH.

On a related note, have all the servant storylets been “top-level” or are any of them hidden as branches or redirects?

The way I resolved the story told me that I should wait for an opportunity card for the conclusion. Has anyone had this result and then actually received the card? I’ve flipped about 30 cards since and not seen it, I assumed it’d be high-frequency.

I quite liked this month’s story.

The final choice was quite agonising, though. I quite want to know what would have resulted if I admitted to the governess that my primary motivation was curiosity…