March Exceptional Story: A Stretch in the Sky 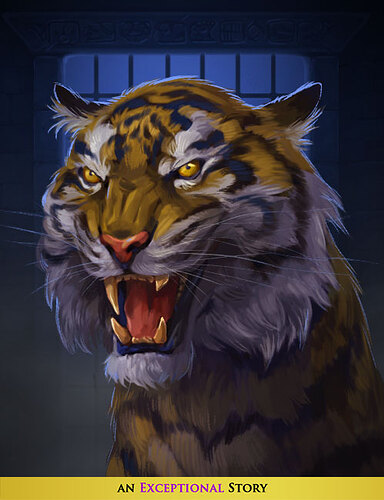 I wonder if a corespondent from the Feast will come into play. Maybe we’ll find out her crime!

While waiting on this, please pop a reply here if this ES contains any interesting requirements.

Another story with “sky” in the title next month, and we’ll have an unofficial second Season of Skies! ;)

I wish the Exceptional stories would mention upfront what you’re going to get by selecting each option, that should be very helpful for non-Fate players like myself.

For this one, I chose the second option and got a Dubious Testimony.

My paranoia for genre subversions struck again. I immediately assumed the tiger was, by far, the safest prisoner to release BECAUSE the guard assumed she wasn’t, the pirate being overly friendly and the spy mentioning a seemingly innocent ambition. Especially with the little hard look in the pirate’s eyes after losing at cards. Wasn’t even tempted to feed any of them to the Starved Men though, if only because B*GGER the Starved Men and their creepy ways. I regret only there was no option to fight them, or collapse a room on them, or something.

I mean, I would’ve picked the tiger anyway but I’m more surprised one of the other two didn’t try to backstab me and seem to be fairly happy with their lot. Hope to see her come back in a future story in which I could use some big cat muscle.
edited by Captain Blood Storm on 2/25/2022

[quote=fishandchips]I wish the Exceptional stories would mention upfront what you’re going to get by selecting each option, that should be very helpful for non-Fate players like myself.

For this one, I chose the second option and got a Dubious Testimony.[/quote]
Those aren’t Fate locked and will appear on Wiki, but the small reward shouldn’t be the reason to pick one of those options. Satisfy your curiosity and engage in that bit of the story!

This was really fun. I think it’s impressive that the major choice is laid out to you really early on, and compared to some of the other Exceptional Stories is pretty low stakes, and yet it agonized more over it than I do the bigger choices in those other stories. Very much speaks to the quality of the character writing.

I think using an art asset in a simpler style for the Probable Pirate helped to add to his characterization, something I’ve never really noticed with Fallen London before.

I do wish at the final choice you were able to ask for a second opinion, even if it meant losing your own ability to choose.

Well, I “saved” the tiger because I figured being owed a favor by a tiger would be a good thing. A schedule of places to not be at certain times wasn’t quite what I was expecting…

If it’s not too spoilery, can someone tell me if you run the risk of worsening your criminal record during this story. I am a level 5 wretched recidivist who is currently trying - at great expense - to clean up my record at the Magistracy.

As far as I’ve seen, no risk of any criminal record.

Thanks, I will go ahead. It would be quite brutal to pile on significant menaces in an exceptional story, but FB likes to stay unpredictable from what I’ve seen.

I released the spy because I thought he’d be the most dangerous. (What, why would the powers that be expect me to honestly tell them the least dangerous rather than releasing the most dangerous? Have they LOOKED at my &quotAdvancing the Liberation of Night&quot level?)

Tiger seemed like she’d be bitey and eat people, but that’s not too disruptive here in the Neath. And, as pointed out, she’s not that great at politics.

Pirate-captain was clearly a savvy canny pirate-captain, affecting a jovial manner as a disguise. He was good at it, and could do some damage, but piracy isn’t that subversive.

That spy, though… a spy with a grudge, and with hidden knowledge? HE could do some real damage to the admiralty or the royals. So out he went.

I picked the pirate because YArrr matey the zee, the zee! And I didn’t like the other two. They annoyed me.

[quote=amalgamate]I released the spy because I thought he’d be the most dangerous. (What, why would the powers that be expect me to honestly tell them the least dangerous rather than releasing the most dangerous? Have they LOOKED at my &quotAdvancing the Liberation of Night&quot level?)
[/quote]
Have you considered that their Advancing the Liberation of Night levels are higher than yours? ;) Fnord.

Played this now and liked it - especially that you could really make up your own mind about what to do.

As I played this story on an account that’s never been to the Roof before, I’d like to ask whether there are any tie-ins to Ambition: Light Fingers, Upwards or Written in the Glim?