Okay. So I’ve found myself in the situation where I needed Making Waves 13, but due to a mis-click, have Making Waves 60. (This is not a typo.)

Other than converting to Notability (and losing the excess), are there any ways to spend Making Waves or otherwise recover the excess that will otherwise be lost?

That must have been a hell of a misclick.

Anyway, if you can gather a bunch of Intriguing Snippets and Compromising Documents, you can spend MW to make Nights on the Town, which I understand can be converted back into MW later using a Salon. (I’ll admit I’m not totally sure how that part works, though.)

edit: beaten. But seriously, what was that misclick?
edited by aegisaglow on 6/22/2016

What kind of misclick could accidentally get you hundreds of CP of Making Waves??

The kind which spends a tiny amount of Fate and does this: 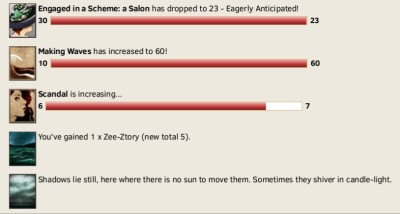 Thankyou (to both of you who suggested this). I’ll give it a shot. ^_^

To clarify: if you have a room above a gambling den as one of your lodgings, you can use is card (The Tower of Sparrows) to convert one Night on the Town into some MW (more than you’ve invested, I believe.

This used to be much better as a way to store MW until later needed, because this lodgings cards was repeatable (i.e. you could repeat it at will without the need to redraw it), so you could store lots of MW and later use them all by drawing the card once

[quote=Kittenpox]The kind which spends a tiny amount of Fate and does this:

Coughs to be more specific, there is a Salon option to invite the Captivating Princess which costs 1 fate and alot of scheme…

[quote=The Master][quote=Kittenpox]The kind which spends a tiny amount of Fate and does this:

Coughs to be more specific, there is a Salon option to invite the Captivating Princess which costs 1 fate and alot of scheme…[/quote]
Correct. But alas, RIP a solid chunk of my ‘Engaged in a Scheme: a Salon’.

At the moment I’m working on getting down my Making Waves. It’s down to 52 and now I need to grind for more Influence items. I should be fine by the time my next TtH rolls around, but suffice it to say this was not the ideal circumstance. Glad there was a solution, though, as it took ages to get my Scheme up to where it was. :-)

I’m on the cusp of getting Notability 15. Please tell me that the Orphanage has a similar Fate option.

I’m on the cusp of getting Notability 15. Please tell me that the Orphanage has a similar Fate option.

I’m afraid not; the only fate option is to get a Laconic Prodigy as a companion which is the best Dangerous and Shadowy one and a &quotcheap&quot one before Overgoat for Watchful.

@Kittenpox is it possible for me as a POSI to grab your MW via inviting you to Dante’s?
edited by sosisqua on 6/22/2016

[quote=sosisqua]@Kittenpox is it possible for me as a POSI to grab your MW via inviting you to Dante’s?
edited by sosisqua on 6/22/2016[/quote]

@Kittenpox is it possible for me as a POSI to grab your MW via inviting you to Dante’s?

While I can see how that might be appealing, I’m most certainly going to decline that offer.

As I understand it, the way the action ‘Benefit from Flattery at Dante’s Grill’ works is that the recipient of the Making Waves earns Change Points of Making Waves at the Level of the donor. It’s not an even transfer of Making Waves.
So, for example, I’m currently at Making Waves 51.
If you were to send that Social Action, and I were to accept, you would gain 51CP worth of Making Waves (enough to go from MW 0 up to about 9 and a half) and I would lose my MW, which is about 1326CP of the stuff… So, not such a great deal.

I’d recommend acquiring Bizarre/Dreaded/Respectable gear, if you haven’t already, as having those reduces the amount of Making Waves required for increasing your Notability, and attempting to acquire that much CP within such a short timeframe, even with all actions spent (as opposed to sleeping) would be one hell of a challenge.

For those who aren’t already aware, the amount of Making Waves required to reach the next level of Notability is equal to:
20 - (B+D+R) + (4*N)
(Where B, D, and R represent the Bizarre, Dreaded, and Respectable you currently have equipped, and N represents your current level of Notability.)

Well, I spent a week farming for [Night on the Town], dropped my MW from 60 to 30, then after TtH converted the rest into Notability.

This hasn’t been the most profitable week, but it was a good learning experience. :-p