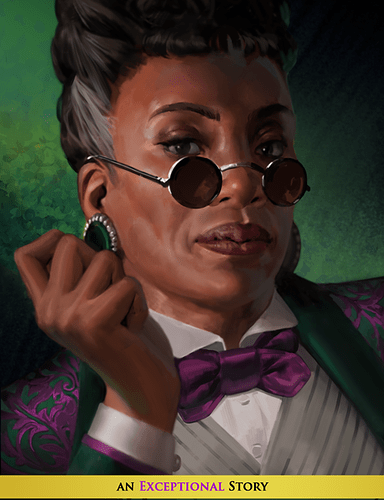 “An immaculately coiffed woman sweeps past you in the street. She pauses and reverses her course to look you up and down. Her gaze lingers on your collar and cuffs.”

Famed London fashion house Abreo Couture is under new management, and about to launch its most daring collection yet. Explore unique Neathy fashions, design your very own lines, investigate the Persistent Prognosticator’s eccentric hiring practices, and help your Deputy Head of Design change hearts and minds one stitch at a time.

What a time! We have a new ES regarding the latest fashion, new item at the Rat market this NW weekend, new (soon?) event after GCO.
This is great!

Ow. Really difficult reward choice there. Maybe this is the time to be selfless?

For anyone who is yet to play it; at some point you will need to wait for an opportunity card (likely more than one, not sure at this point) so it’s best not to empty your entire deck before playing.

Did anyone else feel like this one was a bit…railroaded and abrupt? It reminded me of the ES about being put in charge of a bustling kitchen, which to be honest I didn’t really have a great time with. There was also no indication about how exhaustible certain dialogue options were; not sure if that was MEANT to simulate the idea of a certain someone giving you shifty intel and shrugging off the details but the fact that choosing certain options to investigate what, exactly, is going on didn’t have any real impact on the ending makes the final confrontation feel a bit sudden and hard to get invested in. It was also a bit of a shame that the story seemed to expect me to have a stake in the textiles factory’s wellbeing despite having no real human interaction with the employees not dedicated to hinting at the twist at the end; I’ve got nothing against them but the way the choice was framed, it made me think at some point there was supposed to be further dialogue about the factory workers’ lives and such. Also, one last nitpick: I’m a tad annoyed that I didn’t even get to run some Dangerous checks against the awful woman WHO DIDN’T WARN ME BEFORE HER DIALOGUE OPTION ABOUT PAYMENT DISAPPEARED and she just got to “cutscene sucker punch” me so she could dramatically fall out of sight into that pit.

It’s also vaguely saddening to me that at the end of the day, all you can learn about Neathy fashion really doesn’t amount to anything unless you want the end of ES payout. And hell, I’ve better ways of making echoes so I picked the potentially surface influencing option mostly out of spite at the woman whose fate has technically gone unconfirmed.

Which is a shame, the idea of Neathy clothing influencing those above is promising-even though if the nitpicky part of my brain did wonder about that as a plot hole. Earlier I believe it was specifically mentioned that it’s hard to preserve Neathy goods up where the sun still shines; did I miss something important in the storyline that explains how they make the clothes retain those properties?

I nearly got majorly impeded by this problem because of my compulsive need to milk my Hellworm for all it’s worth. Fortunately, by sheer coincidence I always had ONE last card left to play at my lodgings after dashing back and forth on the railway.

I felt pretty much the same way. We seem to increasingly have stories with straight line narratives that seem unaffected by the choices we make.

I will at least say I feel A Stretch In The Sky, The Queen of the Elephants, and Sugarplum excellently executed the “illusion” of choice by giving you lots of engaging things to do-and at least one meaningful decision. Here I felt absolutely nothing at the final choice because of how late the full conflict was explained. Adornment, while interesting in some ways, also felt like it had a cutoff point where all you can do is let the cards fall as they will; Elephants also did this but at least I went into the cutoff point with a decent idea of the likely consequences. And then there’s Older, Not Wiser where you’re not allowed to feed the ladies your Cider-which smarts, because another ES explicitly lets you give the immortality-seeking woman a sippy.

For what it’s worth, today’s wasn’t as bad as Fading to a Coda in which the story literally tried to tell you to like this specific NPC. But just like the Crocodile Who Would Be King and Sugarplum, I feel like certain NPCs were just…not allowed to fail or be meaningfully opposed even disregarding Ambition-specific advantages.

Is there an epilogue? I don’t seem able to find it after getting my reward . I am curious as to how exactly I am going to influence surface matters.

There’s an epilogue via Opportunity Card. Unlike the mid-story ones, you actually have to wait for it.

Earlier I believe it was specifically mentioned that it’s hard to preserve Neathy goods up where the sun still shines; did I miss something important in the storyline that explains how they make the clothes retain those properties?

I think there’s either a resistance that needs to be broken down, or a perpetual random chance that Neathyness will be “overwritten” once exposed to Sunlight (as with Sunless Sea zailors occasionally keeling over, one by one), and in this scheme I imagine the expectation is “the clothes will keep working long enough, probably.” I don’t recall the story addressing this, though.

This was my main disappointment about this story too. I didn’t feel any impact of my choices on the outcomes. To top it, in the end the “good guys” (I mean those who were framed as good all along) seem to win anyway, though I chose the cool zee-style waistcoat over the fates of the world. It’s not because I’m selfish or mercantile, but because I didn’t get enough information to pick sides. And because I couldn’t stop wondering – if this final piece is soo incredibly important, why isn’t this lady trying to save it herself?
A separate disappointment was that the item’s properties don’t depend on the work done. From what I’ve designed, I would expect a point of Zeefaring or Neathproofed. But obviously, whether you just pick up some fabrics for discount price or make a diligent research, you end up with an outfit with boring stats, easily topped by other items.
Same with the collections’ success. I believe I’ve made similar progress with the first two, but the results were slightly different. And what in the Neath is wrong with the Lunch theme?! It’s a pity I didn’t get to experiment with that!
Another major complaint about the story is the broken logic of The Game. I will never believe that any major decision on the international level can be made because “it just seems right” to one person, whoever they are. Their business shouldn’t work at all as this was described to me. Probably, it doesn’t. Given that both leading NPCs claim to be experienced agents, and with a long history in The Game myself, why would I assume for a single second that what any of them is telling me has anything to do with the truth?
In the output we have a story neither believable nor satisfying. Considering that the final confrontation looks very much like the first drafts of Sugarplum were put to use, it’s better to turn attention to the previous month’s, much more appealing, exceptional story. Unless one is up to collecting a set of cool-looking though useless self-designed outfits

Earlier I believe it was specifically mentioned that it’s hard to preserve Neathy goods up where the sun still shines; did I miss something important in the storyline that explains how they make the clothes retain those properties?

There was a dialogue with the Persistent Prognosticator, where she mentioned that the clothes “don’t last long in the sun” and that they’re “for audience chambers and ballrooms, not the seaside.”

seems to be the intended explanation.

(Quite a late response, but maybe it is still helpful.)