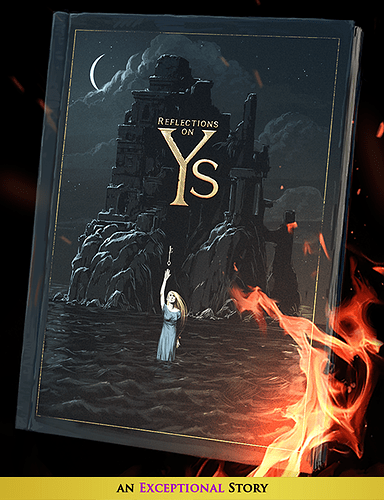 “I’m embarrassed to say I was rather critical of it. But when I heard that the entire print run had been taken, well! I was forced into a reappraisal. The Masters don’t seize just any old thing. There will be some secret at the heart of it. Only a few lines perhaps. Some truth that the author has glimpsed.”

The entire print run of Julian R. Harvey’s poetic epic Reflections on Ys has been confiscated by the agents of Mr Pages! Investigate the contents of this mysterious volume, plan an audacious theft from a Ministry warehouse, and reunite the publisher with his product. Then maybe – just maybe – you’ll be able to sneak a peek at the latest work to pique Mr Pages’ ire.

Then maybe – just maybe – you’ll be able to sneak a peek at the latest work to pique Mr Pages’ ire.

Well, this sounds a fun way to end the year!

Oh wow, this one sounds like it’s right up my alley!

Hmmm, does the option that require 5 suspicion, actually reduces it?

It resets Suspicion to 4, so you can take the other option

Too bad the literary salon doesn’t offer a Terpsichorean option! Then again, maybe they really aren’t interested in this sort of book…

I started off wishing there was a “yes, I will do this to honor that other sinking island I was involved with in another ES” option. I ended up wishing there was an option to slit my employer’s throat. I expected some kind of eldritch secret and after a decent chase sequence ended up concluding that in this particular circumstance, Mr. Pages did absolutely nothing wrong.

Oh wow, this one sounds like it’s right up my alley!

Oh well, it turned out quite differently from what I was expecting, but fair enough! The chase sequence was very cool.

Well, that was disappointing… For my character; I had a lot of fun with this heist, and I enjoyed the variety of options on offer, including the quirk-based ones. And my character did take revenge in the end for being manipulated.

Here is the link for my final pre-epilogue choice; from a quick sampling of journals, it seems not many people made the same decision, but I’m pleased with it.

I liked most of this one, but the ending I picked ended up being just flat out frustrating. First I had Bohemians sell the books off, which I assumed would be fine because quality has never been a factor in what they like before, but apparently I ruined lives by getting them to sell mediocre poetry which feels out of character. Then I reminded Pages, and I didn’t even get any kind of feedback that he was angry, just another life ruined. Just felt mean-spirited.